Afghan-India strategic agreement being operationalized; Modi visit to Kabul on the cards 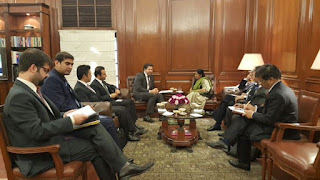 Afghan deputy foreign minister, Hekmat Khalil Karzai, who has been in New Delhi since Monday, says his main task was to operationalize the Indo-Afghan Strategic Partnership Agreement (SPA), and discuss an agenda for a visit by Prime Minister Narendra Modi to Afghansitan.

Speaking on Thursday to a Delhi think tank, Karzai made it clear that President Ashraf Ghani’s honeymoon with Pakistan was over, and that Kabul was back to business as usual with India.

After Ghani assumed the presidency in September 2014, he had sent ripples through New Delhi’s strategic establishment by first visiting China and then Pakistan, even calling on that country’s army chief, General Raheel Sharif, before meeting Prime Minister Nawaz Sharif.

During that brief honeymoon with Islamabad, Kabul forswore arms supplies from India, even though the SPA explicitly provided for that. Karzai now reveals a fresh “wish-list” of weaponry was given to New Delhi earlier this month by visiting Afghan National Security Advisor, Hanif Atmar.

“We had our National Security Advisor who came here a week ago. He had extensive conversations with his counterpart (Indian NSA Ajit Doval). Much of what is referred to as the “wish list” was discussed in detail”, said Karzai.

Pointing to a growing role for India in regional peace efforts, Karzai revealed that New Delhi would host the next Heart of Asia Conference, a prestigious conflict resolution initiative for Afghanistan. This year’s Heart of Asia Conference is being held in Pakistan on December 9. It remains unclear whether Foreign Minister Sushma Swaraj will attend.

Karzai publicly explained, for the first time to an Indian audience, how Kabul’s rapprochement with Islamabad foundered last year. He said Afghan officials laid down three conditions to Pakistan’s military, which had volunteered to broker talks between Kabul and the Taliban. First, the Taliban should not adopt the symbolism of the “Islamic Emirate”, as the Taliban regime called itself, including declaring the Taliban leader the “Emir ul Momineen”, or “commander of the faithful”. Second, the Taliban should not have any big gatherings in Pakistan and, third, a series of major Taliban attacks planned in Afghanistan should be blocked.

“Unfortunately, all three requests were not complied with. (After Mullah Omar’s death was announced) Akhtar Mohammad Mansour was appointed the Emir-ul-Momineen… There were massive meetings (in Pakistan) that we were aware of to consolidate his leadership. And major attacks took place in Afghanistan”, said Karzai.

“In the light of these, we called off the talks. That does not mean that we have completely shut the door (with Pakistan). But a serious level of trust building needs to take place before we start engaging in these talks”, insists Karzai.

Karzai told Business Standard that, notwithstanding the Pakistan factor, the Kabul-New Delhi relationship “is much stronger than the strategic partnership”.

Comparing the two, Karzai stated: “A country that provides extensive assistance (to Afghanistan), builds dams, builds a parliament building… clearly gets a lot of sympathy… But at the same time, when you see what we are receiving from Pakistan, it truly hurts us… Pakistan is associated with (militant) safe sanctuaries… Our greatest desire and request is that Afghans should be left to their own destiny, to stand on their own feet, but sadly that is not happening.”

While the US has slowed its troop withdrawal from Afghanistan, undertaking to retain 9,800 troops in that country, Karzai says Kabul knows it will have to be responsible for security in the country. He says the international community can only provide support, which will be finalized in two major conferences next year.

“In July 2016, the NATO conference in Warsaw will look at financing, training and supporting Afghan security forces in next three years, that is 2018-20. We expect the international community will continue to provide the support we are looking for.”

“In October 2016, we will have the Brussels conference on civilian assistance. We will put forward our development agenda… so that, instead of just looking at the military, we also have a civilian development agenda”, said Karzai.
Posted by Broadsword at 09:12

Afghanistan is too important. The Taliban/Pakistan must be beaten, and Modi should so everything it takes to make that happen. We can't let the Pakis get back what they lost.

I wonder why afghans want to buy arms from India even though they have given more significance to their relationship with China.