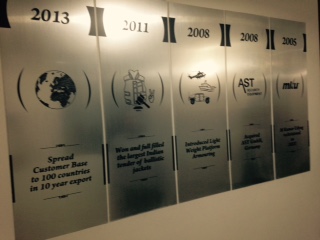 Images of ill-equipped security forces battling terrorists on Monday near Gurdaspur, again reminded planners that much of the military and most policemen face serious shortfalls of basic body armour.

The problem is especially acute for the army, with lakhs of soldiers exchanging bullets everyday with Pakistan on the hostile Line of Control (LoC), and with militants in Kashmir and the northeast.

During the last three years alone, 17 Indian jawans were killed on the LoC in 357 gun-battles with Pakistan, the defence ministry told parliament on March 13. Yet the army, paramilitary and police forces continue going into harm’s way with out-dated bulletproof jackets (BPJs), and helmets designed for motorcycle riding, not for the impact of a 9-millimetre bullet.

The difficulties of buying multi-role fighters and ultralight howitzers --- such as astronomic prices, and negotiating technology transfer to build in India --- do not hold back the purchase of BPJs and helmets, which are currently manufactured in India for discerning users like the German Army.

Yet the defence ministry told parliament on July 21 that just two purchases are in the pipeline for the 12 lakh-strong army. One lot of 1,86,138 BPJs is under trials, while the purchase of another 50,000 BPJs is before a “technical evaluation committee”.

A visit to MKU, a medium scale company in Kanpur, illustrates quality options that the goverment does not avail of. MKU supplies North Atlantic Treaty Organisation (NATO) militaries, and can build 5,000 BPJs and 25,000 helmets per month --- one of the world’s largest installed capacities. It is building 42,000 sets of body armour for Ecuador, 8,000 for Egypt and 16,000 for another West Asian country. It is supplying protective plates for the German Navy’s F-125 frigate, and ballistic panels to protect fast interceptor craft (FICs) that a Sri Lankan shipyard, Solas Marine, is building for the Indian Navy.

But MKU and its rivals in this field, companies like Tata Advanced Systems and SM Pulp, have received only token orders from the army, mostly from the Northern Command under local financial powers.

MKU, despite its modest annual turnover of Rs 250 crore, is a multinational company. To obtain a world-class research & development (R&D) facility where live ammunition could be fired to test protection levels (Indian rules make this well-nigh impossible for a private company), MKU acquired a German company near Hamburg that is now MKU GmbH. Last year, MKU established a production facility in Ras-al-Khaimah, UAE. While manufacture is cheapest in its Kanpur facility, MKU supplies European customers from Germany and West Asian customers from Ras-al-Khaimah.

Says Manoj Gupta, the MKU chairman: “We are a medium-scale enterprise, but we spend 6-8 per cent of our annual turnover on R&D.”

This has provided MKU a major price advantage. While many rivals offer ready built products in response to tenders, MKU develops mix-and-match protection solutions, precisely meeting the tender requirement. This allows crucial savings in raw material --- synthetic fibre produced in bulk by a handful of global giants --- that constitutes 70 per cent of production cost. Newly developed products then undergo ballistic testing in Germany with live bullets.

With all this, MKU’s first substantial army order is impending: a Rs 300 crore contract for 1,58,000 helmets. In trials concluded last year, MKU’s helmet was the only one to pass every test, says Gupta.

A key problem that MKU faces is that Indian government buyers do not frame requirements precisely. Tenders usually demand either Level III protection (against 9 millimetre bullets) or Level IV protection (against a 7.62 millimetre armour piercing rifle bullet). However the Terminal Ballistics Research Laboratory, Chandigarh finds that the same Ordnance Factory ammunition has a velocity varying from 345 metres per second, to 790 metres per second.

“With such a divergence, how can we offer a tailored product? The army would get the product it wants if it specifies precisely the velocity of the bullet it wants to protect against”, says Gupta.

In the absence of domestic orders, MKU flourishes on export orders, which constitute 90 per cent of its revenues. This has protected the company against the sharp business cycles that have buffeted rivals more dependent on Indian orders.

MKU executives suggest the defence and home ministries should place small orders, in a staggered manner, with multiple vendors, rather than a giant order with one company that would take years to deliver.

“Technology advances rapidly in this field. Specifications framed in 2015 would be outdated by 2017-18. So there should be small orders, placed annually, with improved specifications each year”, suggests Gupta.
Posted by Broadsword at 07:36

The photos and videos indicate sorry state of police and other security forces fighting terrorists...no helmets and no bulletproof vests and no protective shields that every one have in the west...

I think the politicians are too old or too uneducated to think about this kind of scenarios and do some forward thinking in acquiring right things...
Bureaucrats seems to be even worse...

I wonder why they did not fire hundreds of tear gas and some high intensity gas canisters to destabilize and disable them...
If they wanted to capture them alive this is the best way instead of sending an SP inside...too high price to pay...

I hope that every one learns and immediately orders all those equipment cited in this article from that company and also others who will establish a company in India with TOT...

Very sad day indeed...how easily they can push in terrorists...

Strangely the government's own procurement policies ties it in knots and the already established facilities in the country are ignored. There are several overhaul facilities in the private sector for defence aviation LRUs that are completely ignored by the government because service HQs are too scared to recommend that the overhaul of aircraft parts go to these local in country organisations. Instead precious foreign exchange is spent in duplicating such already available facilities. Needless to say that these duplicated facilities are under loaded and under utilised. This is a true mockery of make in India.I surely hope make in India also includes overhaul in India!! So long as Govt. organisations fight shy of recommending private organisations who already have the facilities to do the job there will be tremendous wasteful expenditure to the country all the wonderful high level policies drafted in the country will continue to be poorly implemented.

“With such a divergence, how can we offer a tailored product? "

I do not find this question too tough to answer.

Obviously it is the bullet with higher velocity? What will army do with an armor that does not protect against high velocity bullets?

I thank you and congratulate you on this article. This was something I wanted to be reported or get updates about for a "Long" time.

Its as if somebody read my thoughts on this. I had read about this company a couple of years ago , in a Military blog but had since forgotten the name of the firm. One of the Posters on the blog had posted pictures of their displays from an Expo and had mentioned that this is an Indian company that manufactures Ballistic protection equipment for NATO.
Over time i forgot where I found this information and often wondered why in gods name are our troops not well protected by such gear, especially when this is an Indian company.

Safety of our troops is not just a Political order recently given by RM on his visit to J and K to minimise own casualties. It is also number 2 verse of the famous Credo (originally addressed by Field Marshal Phillip Chetwode in his address.) etched in gold in the IMA which is instilled in every IMA cadet.

Even Statistically, After Road accidents, Terrorist ordnance in recent times is the biggest killer of Indian Army troops. These troops officers and men alike, from all areas in the Army (SF, Infantrymen, Cavalrymen, Sappers, Gunners, Signallers, Service corpsmen, Intelligence men "Spooks", Medics or Ordnance Corps men). It is also important to acknowledge the many supreme sacrifices made by Other services IAF and NAVY and our CAPF and other State Police units as well.

Almost all of these casualties were in a dismounted Infantry related role. Which means that had they been well protected a many of these lives could be saved. The protection of troops by way of body armor should be ---top most--- in our procurement lists.

We must first focus on body armor, then every thing else. Historically, Every military worth its name since the beginning of combat history has invested in it. In war one has to send soldiers in harms way and that is what soldiers do, but that does not absolve us (as a nation) to not ensure their safety, when able to do so.

SP death.. Stupid lead from the front nonsense and misplaced heroism. This is seen again and again. From officers charging terrorist positions like the dead Lt. Puneet Dutt to cops like the late MC Sharma in the Delhi case 5 years back. And three heroic but very dead Mumbai cops in the Mumbai LeT commando raid. Doctrine, SOPs, tactics, training needs to be improved. These need to the developed on the basis of a honest benchmarking our culture, capabilities, political and media management imperatives The police depts in india are geared towards beat cop mukhbir informer, zone based policing, cultivate chai walla, taxi autowalla. And they do a terrific job when given a free hand and support from political and local leader ship. They are not trained for after the fact para military and anti terrorist action. Sure there are serious deficiencies in in equipment. But quit complaining about relatively inconsequential stuff like light weapons body armour etc. in lieu of training and SOPs. The 7.62 Ishapore SLR is a highly accurate terrific weapon. The sterling SMG was used by commandos, the SAS included until the late 70s. Even the much maligned Lee Enfield delivers a seriously heavy round highly accurately. I dont think human flesh has changed in a few decades. The SWAT t shirt h
does not make SWAT. Takes 10000 rounds to become a decent shot.

IT IS SHAME THAT THE POLITCIANS , BABUS AND SENIOR FLAG RANKS ARE FAST TO CONCLUDE BIG DEALS LIKE THE RAFAEL OR HUGE NAVAL SHIPBUILDING AND SUBMARINE PROJECTS , SIMPLE ONES LIKE BPJS , HELMETS , SMALL ARMS CARBINES NV SCOPES COMBAT CLOTHING SHOES SO THAT THE OFFICERS AND TROOPS DO NOT BLEED IN KASHMIR AND ARE READY FOR PAK AND CHINESE AGGRESSION WHICH MAY COME SOON.

The hi tech stuff like fighter jets are always in news. However it is the basics like shoes, rifles, carbines, , helmets, personal,safety gear, stuff. Grenades that need to be in continuous supply.
I hope the government sets these under make in india policy. The goal should be all armed forces, CAPF and at lest 50% of state police have these,in border states every cop needs these equipment.
First it is training, we need to ensure all state armed police fire at least 200 a year to keep themselves ready. SWAT need higher level of training. This can be start immediately
The should be one single standard for the whole country

This was a nice read Ajai sir.
- Tanuj,Noida

6-8% is high! Companies usually spend around 4% and the trend is downward. Well done!