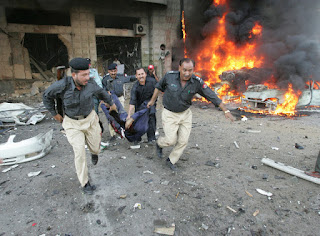 And you thought promoting democracy in Pakistan was the way to snuff out terrorism since terrorism is the antithesis of democracy? Wrong! When it comes to Kashmir, democrats see the insurgency as a struggle for “azadi” or freedom, warranting armed struggle, even jihad.

Were you under the impression Pakistani jihadi groups were recruiting mainly from madrassahs (religious seminaries) that churn out radicalised youth? Wrong again! Most jihadis are reasonably educated, while less than one per cent of Pakistani youth get their education exclusively from a madrassah.

These were some of the common perceptions of Pakistan that C Christine Fair, an acclaimed Pakistan expert who teaches at Georgetown University rebutted on Thursday in Delhi. Fair was speaking at a think tank, Observer Research Foundation, on: “Violence in Pakistan: who supports it? Rebutting conventional wisdom”.

Fair is the darling of Pakistan-critics worldwide, after an acclaimed book this year --- entitled “Fighting to the end: the Pakistan Army’s way of war” --- which quoted extensively from the writing of Pakistani officers to argue they placed the army’s interests far above those of Pakistan.

Deploying meticulous quantitative research to support unconventional conclusions, Fair argued that the Lashkar-e-Toiba’s (LeT’s) rank and file consists of reasonably well-educated youth, 60 per cent of whom had passed their matriculation and even intermediate examinations.

This conclusion is based on a study of 1,000 LeT fighters who were killed, mostly fighting in Kashmir. Research associates visited the homes of each of the dead jihadis to record their qualifications and motivations (see chart).

“More than 60 per cent of them were matriculates or above, while only about 23 per cent of Pakistani, and Punjabi, males above the age of ten have similar qualifications. And just 1.13% of the Laskhar fighters were illiterate, compared to more than 30 per cent of the broader population”, said Fair.

The reason for that, she explained, is that the LeT recruits like most regular armies, turning away the uneducated and the unintelligent. “Even after they’re recruited, these Lashkar guys have to constantly prove themselves. They have to constantly lobby to be picked up for the next round of training. So Pakistan’s better lot are being killed [by Indian security forces] while fighting in Kashmir”, says Fair.

Fair says the Pakistan Army and the LeT recruit most of their fighters from the same few districts in Punjab. The army gets the pick of the youth, while the Lashkar chooses from those remaining.

She also rebutted Pakistan’s frequent complaint that supporting the US war on terror after the 9/11 attacks in 2001 had unleashed the monster of terrorism upon the country. Fair proves that terror-related violence was entrenched before 2001.

“But if you talk to Pakistanis, they would like you to believe that everything was fine before 9/11”, she says.

Her conclusions are based on a rich database on terrorist-related and political violence in Pakistan, painstakingly compiled by Fair and her associates during a 24-year period from January 1, 1988 through May 2011. These were first published online last year in a paper entitled “Measuring political violence in Pakistan: Insights from the BFSR Dataset”, co-authored by Fair.

Fair explains why Pakistan’s poor, particularly urban poor, do not support terrorism. She points out that most terrorists are from the Deobandi sect, which is responsible for practically all terror-related violence in Pakistan, including sectarian violence against Shias, Barelvis or Ahmedis, or anti-minority violence directed at Christians and Hindus.

“These target groups, and their shrines that are often hit, are located in the poorest parts of the towns and cities. These people are actually the immediate victims of terror. They are potential allies [for counter-terrorism officials]”, she says.

Fair’s extensive research on madrassahs suggests they are not the factories of jihad. What they do engender is a mind-set that supports jihad.

“Kids don’t make the decision to join a madrassah; their parents do. And parents who put their kid into a madrassah are more likely to approve of youngsters taking up jihad. While a madrassah education seldom leads to a youngster taking up jihad, there is a correlation between the two.

"Deploying meticulous quantitative research to support unconventional conclusions, Fair argued that the Lashkar-e-Toiba’s (LeT’s) rank and file consists of reasonably well-educated youth, 60 per cent of whom had passed their matriculation and even intermediate examinations."

I really am interested in this meticulous research, how she managed to track each and everyone of the LeT boys killed in Kashmir and even more incredulous their education level ;-). It is this incredulous research and "quantitative" analysis that leads to the unconventional conclusion or is it the otherway around; that the unconventional conclusions lead to meticulous quantitative research ;-). This may explain why she is only ever invited to speak in India. The more she write the more more she sounds like a woman spurned.

By the way you should tell her that she needs to update her knowledge on PA recruitment patterns. Her sources are from books in the 1960's, lol.