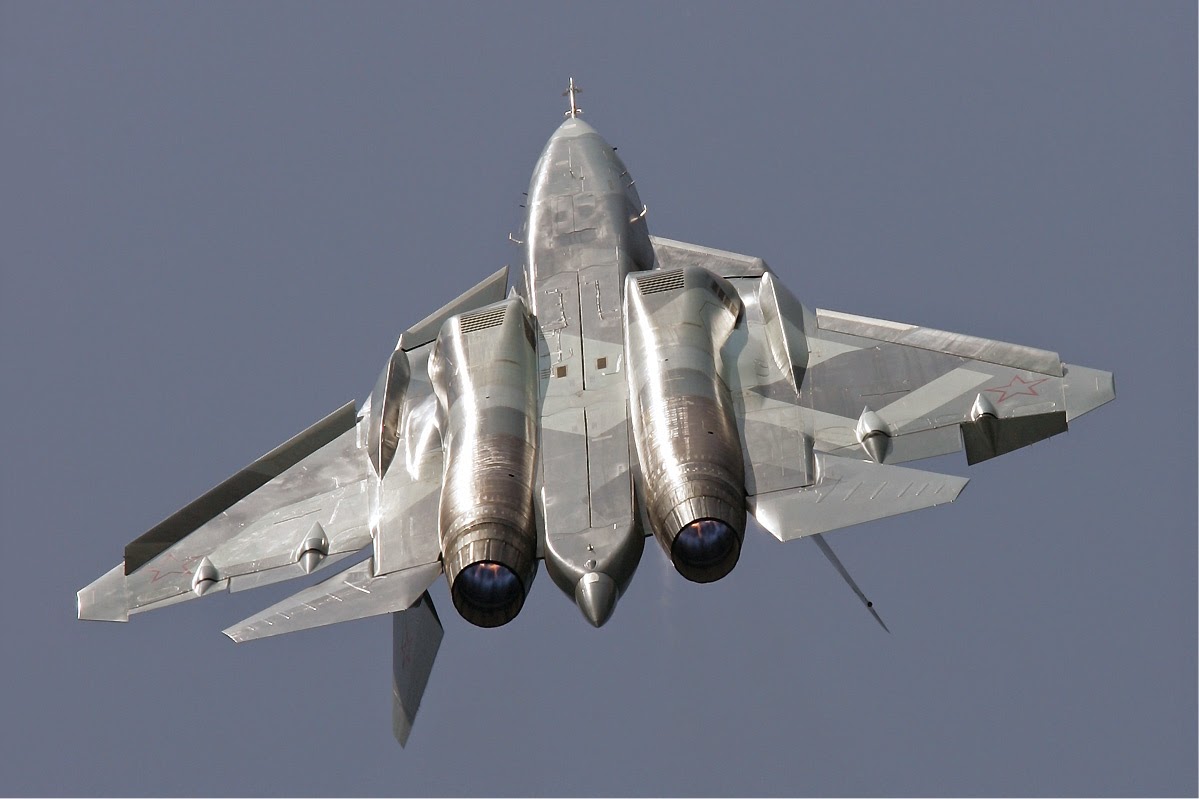 The programme for India and Russia to jointly develop a Fifth Generation Fighter Aircraft (FGFA), long touted as the flagship of a time-tested defence relationship, has run into a stone wall.

Documents available with Business Standard indicate that India’s defence ministry is cold-shouldering Russian requests to continue negotiations on a “R&D Draft Contract”, which will govern the partnership to develop a futuristic, fifth-generation fighter.

A letter from Russia’s powerful export agency, Rosoboronexport, points out that India’s defence ministry has not responded to Russian requests dated February 9 and March 3, which “suggested holding of the negotiations in February and March of 2015.”

“(W)e have not received any data regarding readiness of the Indian side for the negotiations”, the letter complains. It goes on to request holding the next round of negotiations between April 6-9.

The letter refers to Project 79L, which is the code name for the FGFA project.

This is a precipitous fall from grace for a co-development project considered so strategic that an Inter Governmental Agreement (IGA) that New Delhi and Moscow signed in October 2007 exempts it from normal procurement rules. Indian defence planners have long held that co-developing the FGFA would help India build its own fifth-generation Advanced Medium Combat Aircraft (AMCA).

Following the IGA came a General Contract in December 2008, which stipulated details like work share and cost, and the conditions under which the FGFA could be sold to other countries. Under a Preliminary Design Contract (PDC) in December 2010, New Delhi and Moscow contributed $295 million each to finalise the fighter’s basic configuration, systems and equipment.

With that completed in June 2013, the R&D Contract is now being negotiated. This would govern the actual design and development of the FGFA, and is estimated to cost $3-4 billion each.

Meanwhile, the Indian Air Force (IAF) has turned cold to the FGFA proposal. Sources tell Business Standard this is because air marshals fear the FGFA undermines the rationale for buying the Rafale fighter from France, a $18-20 billion contract that is sputtering through so-far unsuccessful negotiations.

The first sign of the air force’s eventual volte-face on the FGFA came in Oct 2012, when then IAF boss, Air Chief Marshal NAK Browne, announced that the IAF would buy only 144 FGFAs instead of the 214 that were originally planned.

Then, in December 24, 2013, top IAF officials alleged the FGFA would not meet Indian expectations. Business Standard reported that air marshals at a high-level defence ministry meeting (January 21, 2014, “Russia can’t deliver on Fifth Generation Fighter Aircraft: IAF”) claimed the FGFA has “shortfalls… in terms of performance and other technical features.”

The IAF claimed the FGFA’s current AL-41F1 engines were underpowered; the Russians were reluctant to share critical design information; and the fighter would eventually cost too much.

On January 15, 2014, at a MoD meeting to review progress on the FGFA, the deputy chief of air staff (DCAS), the IAF’s top procurement official, said the FGFA’s engine was unreliable, its radar inadequate, its stealth features badly engineered, India’s work share too low, and the fighter’s price would be exorbitant by the time it enters service.

Meanwhile, Sukhoi is flying and testing their version of the FGFA, which is termed the T-50, or the PAK-FA (Perspektivny Aviatsionny Kompleks Frontovoy Aviatsii, or “Prospective Airborne Complex of Frontline Aviation”). Moscow has declared it would enter Russian Air Force service by 2017-18.

However, rumblings within the Russian defence industry suggest that all might not be well with the PAK-FA. On January 17, the influential Mikhail Pogosyan was relieved as United Aircraft Corporation (UAC) --- an umbrella body that oversees Russia’s aerospace establishment including giants like Sukhoi, Irkut, RSC MIG, Ilyushin, Sokol Plant, Tupolev, UAC-Transport Aircraft, Aviastar-JV and VASO.

The Russian media has linked his departure with problems in developing the Sukhoi-35, a programme that is reportedly being scaled back. However, there is no word on cutting back the PAK-FA, a project personally backed by Putin.
Posted by Broadsword at 07:48

How can this plane be even called stealthy? Just look at those ugly fat lines and bulging side handles, lol.
But why is the belly so depressed, guess its been working out the six packs! Poor man's stealth plane.

Russia is keen to sabotage Rafale procurement. Tipping point will come after Modiji visit to France. SU35 is a good alternative if the deal doesnt go through. But IAF is very firm this time about Rafale. This has been amply cleared by Arup Raha. Jaguar upgrade to Darin III standards and replacing it with Honeywell 125N engines is also a cheaper route.

Maybe its time to switch to the F-35. IAF may have realized that, whatever Russia sells to India, it ends up in Chinese hands, sooner or later. At current projections the F-35 may even work out to be cheaper.

What is going on with Indian Air Force? Why is it being ridiculed so much in online media? Is it that what even common people can see, these Air Marshals can't see ??

People on other forums are calling IAF as "Imported Air Force" which is full of "air drivers" not officers !!!

Seems like one Rafale purchase will make IAF lose its face for a decade. Arrogant/condescending responses from IAF/ex-IAF lobby makes it even worse. Concrete arguments always help and once-in-a-while one does come across some reasonably argued comments.

But majority of IAF/ex-IAF responses reek of plain arrogance and ridicule of non-IAF crowd, that negatively intensifies the issue. This trend has to be stopped ASAP otherwise, once IAF loses goodwill/trust of common people, it may become a huge problem.

There is a wave of indigenisation and "make in India" movement going on in India. Indian Navy is earning heaps of goodwill by being on the right side of it. IAF on contrast is becoming the butt of jokes.

Did you get the URL I sent saying the Russians themselves disappointed with their T-50 and have severely cut back 5-year orders?

Russia has always been a second-world economy. They relied on mass for military superiority. Moreover, the figured within 10-days a war would go nuclear so high-tech/longevity was unimportant. Their arms were simple and sturdy because they lacked trained maintenance personnel.

It seems odd for us to pay Russia for advanced technology that they themselves get from advanced nations. And their life-cycle costs are as high as western stuff.

Conversely, as you have pointed out endlessly, unless we accept initial lower quality as trade-off to build our own manufacturing base (like China), then we will never be independent.

This is Excellent news !!

India must save the money from the PAK-FA, and instead wholeheartedly deploy it in the indigenous AMCA project. We can marshall the private sector, if necessary for this project. They can partner with DRDO to develop the AMCA.

Money is scarce. And indigenization is the need of the 21st century. Put these together, and the answer is not an expensive Russian import. The answer is a cost-effective Indian product. Much like our Mangalyaan.

There seems to be a conspiracy to undermine or delay the FMF/FGFA project by the IAF and MoD. They are more eager to purchase Rafale instead of FGFA. It is surprising that a professional force like IAF is more interested in acquiring 4.5 gen instead of buying a 5th gen aircraft. It is also shocking that IAF wants only twin seat version which will be delivered by 2022 (seems impossible now) instead of the single seat T-50 which is likely to be inducted by Russian Air Force in 2016, a good 6 years before. China is already developing 2 5 gen fighters, the J-20 based on F-22 and J-31 based on F-35. It is very likely that Pakistan will be the first overseas customer for these jets. But still the IAF wants to go far a 4.5 gen medium combat jet instead of a 5 gen heavy combat jet. Also more surprising was the comment by IAF chief that they don't have a plan b if Rafale acquisition fails. This would be simply unacceptable in any professional organisation. It is also surprising that India has not evinced interest in F-35. Yes the US will not sell it without attaching some conditions, but India should have considered the F-35. The induction process is being further complicated by forcing make in India in defence acquisition. Yes, it is required for long run requirement. However immediate shortfalls should be imported to secure our national interest.

I am not sure what to make of this article but there were reports that Russia did not let IAF guys go near a T-50 plane at all...

Also, the TOT, MOT, and spares transfer from Russia is very poor..

Indeed India paid hard earned money for T-90S, Smerch, SU-30MKI, Mig-29K, etc but the promised TOT and MOT did not materialize at all...Even Kilo class submarine rusted for 8 years or so...

Is there any truths to it? You have to dwell on it...

Questions is how do we trust them on $30+ billions contract when they do not deliver technology at all...

I am for the Rafale. Its a sure thing. With Rafale...you get solid capability straight away.

With T-50....its a future pipe dream. Will be great if it all comes true. But lets be real...what are the chances there wont be big big hiccups. Already there are so many contra indications.

With the money saved, lets invest big time in LCA Mk-II & a LCA Mk-III as well, and AMCA, and who knows we might even export AMCA back to France & USA! Wishfull thinking. But if you aim for the moon, you might reach the clouds. Think in terms of USN & USAF F35 having hiccups and their F-18s / F-15s on their last legs, albiet upgraded legs. Enter AMCA.