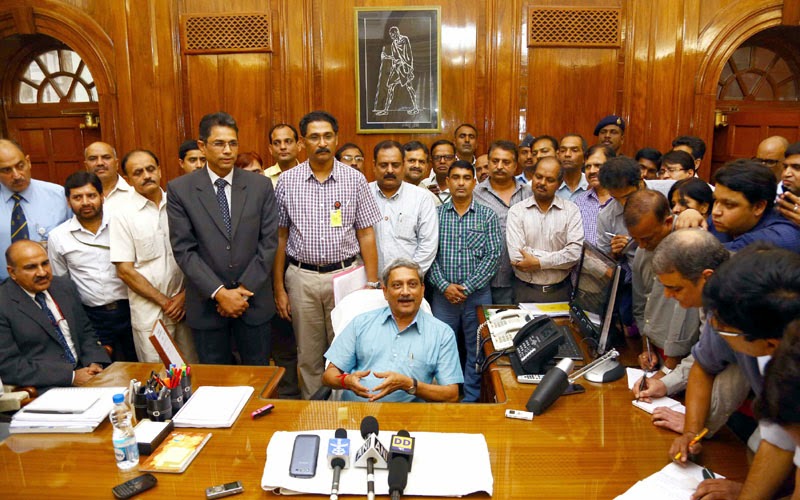 Going by the public statements made so far by Defence Minister Manohar Parrikar, one could be forgiven for mistaking him as minister for defence procurement. In practically every statement he promises “transparency and speed in defence procurement”. To be fair, he admits it will take him time to grasp issues relating to national defence. Even so, if he continues promising only faster procurement, it might well become a self-fulfilling prophecy. It would be worrying to have a defence minister who measures his success in capital rupees spent. Instead, Mr Parrikar must focus on adding capability. This can be done at relatively nominal cost.

A striking example has been reported in Broadsword (See article below, “Advanced Towed Array Sonar contract provides major boost to navy”). Over the last two decades, the navy has built up a powerful and enormously expensive fleet of capital warships --- the aircraft carriers, destroyers, frigates and corvettes that control the seas in war. Yet these warships, each costing several thousand crore rupees and crewed by a couple of hundred sailors, have remained desperately vulnerable to enemy submarines. This is simply because they lack “advanced towed array sonar”, or ATAS, which the Defence R&D Organisation (DRDO) had promised to deliver but did not. By now procuring ATAS from the global market --- each worth a piffling Rs 50 crore --- tens of thousands of crores worth of naval warships have become combat capable.

Such examples abound within the military. Yet the ill-informed public narrative on defence procurement centres on enormously expensive weapons platforms that, in many cases, are operationally ineffective even after lavishing billions because smaller systemic or structural drawbacks restrict their full employment. In militaries like that of Pakistan, where money is short even after unfairly burdening the national exchequer, there is awareness of the need to obtain bang for the buck. India’s relative wealth has not nearly been translated into commensurate capability.

Remaining with the navy (ironically the most cost conscious service), there is constant breast-beating over the submarine shortfall and China’s growing lead in submarine numbers. The media constantly harps on how India has just 13 submarines compared to China’s 53 conventional and 5 nuclear attack submarines, though that lead could increase this afternoon, giving how fast China is building more. Everyone’s solution, predictably, is to throw more money at the problem, by quickly sanctioning (quickly and transparently, as Parrikar would say!) Project 75I, which envisages building six new submarines for a mind-numbing Rs 50,000 crore.

Yet if one were to scrutinise the on-going Project 75, under which Mazagon Dock Ltd, Mumbai is building six Scorpene submarines, a sane planner would be aghast to discover that these submarines --- which have been in the works for more than a decade --- will be operationally hamstrung when they finally roll off the line. The submarine’s key weapon is the heavyweight torpedo and, incredibly, the MoD has omitted to buy any for the Scorpene. In 2011, Finmeccanica subsidiary WASS had been selected to supply 98 torpedoes for some Rs 1,850 crore. Since that contract remains unsigned, the Scorpenes will join the fleet without their key weapon.

Yet, nobody in the military, the ministry, the government or the media is called to account for allowing a Rs 1,850 crore procurement to stall the battle-readiness of Rs 24,000 crore worth of submarines. One can forgive the ministry, manned as it is by generalists for whom torpedo sounds like a variety of libido. The Prime Minister’s Office, with so many ministries to meddle in, can only focus on big bang procurements --- and that means those that are regularly reported on, or those that the military is pressing for. The media, especially top editors, choose not to waste mind space on the nitty-gritty of defence economics, and instead focus their collective gaze on high-voltage procurement contracts that can be easily remembered by the billions they cost.

Take the media fanfare over the selection of the medium multi-role combat aircraft (MMRCA), an apparently fixed match that was won by the French Rafale fighter, the least expensive of the two most expensive fighters on offer, which were predictably ushered into the final selection. Currently, this $20 billion tender remains the single most reported defence story, with uncounted column inches speculating on the imminent signature of the Rafale contract. This newspaper has been practically alone in carrying cost-benefit analyses on the Rafale proposal, and in debating whether the opportunity cost of buying this fighter is too high.

In contrast, there is little mind space for the little things that would improve operational capability at little cost. Maintenance, that boring process that can put a hundred additional Sukhoi-30MKIs into the sky just by better inventory control and technician training. Light fighters, especially the Tejas Light Combat Aircraft (LCA), which should be the pride of India but is sadly the bastard child of the laughably named Indian Air Force. Force multipliers, like airborne refuelling aircraft and airborne early warning and control systems, can be wisely procured and deployed to make each squadron as effective as two. But this is humdrum stuff. So are issues like night-blindness that dramatically reduces combat capability across the three services, especially the army.

It is these mundane essentials that Mr Parrikar must focus on. Appointing a tri-service chief would spare him the confusion of having to navigate the tri-service jockeying for funds and resources. He must institute a detailed capability audit, in which each service presents a plan for optimising their existing weapons and platforms rather than just stretching out their palms for newer, better and, of course, more expensive toys. It is militarily prudent to get our existing kit working optimally --- the military equivalent of fixing the Indian Railways before building fancy new bullet train lines.
Posted by Broadsword at 08:44

The importance of bang for buck has always been underplayed in India. As a former serviceman myself I completely agree with the train of thought expressed in this article. Incremental capability increase by concentrating on system enhancement is the need of the hour when we walk the tight rope between cost effectiveness and requirement fulfillment. The present DPP is also falling way below the expectations of purchasing hardware which is the need of the hour. DPP and the paranoid defence ministry is shackled by the fear of being faulted of not having enough checks and balances to prevent further scams. This paranoia is also reflected in the new Minister's thinking when he keeps harping on transparency. Of course transparency is required, but who is batting for bang for buck?? The ministry will conveniently lay that responsibility on the services and rightfully so saying that the services should highlight the operational requirements.

Sir, there be any problem in integration of Varunastra HWT in Scorpene .
Recently when A-72 sank, an NSTL employee told they had successfully tested Varunastra, when it was returning after recovering the torpedo it sank.

A well written article and a timely one. Mantri ji must look into all measures which can improve our defence capability with small expenditure. I expect the three Chiefs to advise him on these lines. It also brings into question whether a person with military background will suit the job more. In my humble opinion NO. It better be left to a civilian public representative lest it become another rank to be working for by the three Chiefs. I think they have done enough of that and need to retain their objectivity and call a spade a spade.

It translate more or less around INR. 3500 cores / submarine. ( Probably it is cost of building the submarine. Armament cost will be extra. But this is a guess.) So if Japan can built an advance AIP. propulsion submarine at that money then why we are spending so much !
Regards.

Weapons have a finite shelf life. Specific to torpedoes, sensors, batteries & moving parts, all have shelf life (~10 years best case)less than the structural life of a submarine (~30 years).

Unless a submarine is launched & undergoing trials, ordering torpedoes and letting them age in depot is wasteful.

Which is why weapons are inducted once platforms are ready.

Dear Sir, While the issues you've raised are logical, your criticism of the new RM is at worst, unwarranted and at best, a tad too early. There are enough indications of the new RM's desire & ability to work hard to do the right thing by the Services. No one expects you to wait like patience on a monument but the least you could do, is give him a fair chance to prove his credentials!
Regards

Great article. Very informative. I hope the relevant people in MoD read it.

Very valid points. Can't understand why MOD remains to be ignorant about these issues???

Very well said. Also could you please give us a complete list of the must needed procurements like the Torpedos for submarine, in your next article. It will be very useful.

A very well written article sir, it points out the inherent weakness in the system ... people don't understand that integrating a torpedo in a submarine is not an easy task. A simple example being the fact that the torpedo tube launchers manufactured by L&T are twice the weight than the original system they reverse engineered !

The Varunastra has a much lesser capability in terms of ability to sustain water depth pressure thus it's shelf life is 5 - 7 years while the usual life of a torpedo is 20 - 30 years. Moreover who is forgetting the cost of integration / testing phase / compatibility issues which will not save costs but may push the price upwards without guarantee of success.

Whoever mentioned that life of Torpedo is 10 years needs to get the facts clear. The A224S Torpedos with the Indian Navy were supplied over 20 years back and are still functional.

You cannot mix n match superior defence equipment when you have already invested 20,000 crores !! It's like buying a Rolls Royce and changing the engine at the last moment with a Kirloskar because it is cheaper and made in India :)

Launching & clearing billion $ programs is half the battle won, ensuring the critical programs pending since years are implemented should be the need of the hour.

Very pragmatic assessment and the bang for buck should apply for every aspect of defense expenditure as consider the life cycle costs of the fighter and transport planes. Look at how much of the lifecycle cost of mirage had been and appoint and Evan after 45 million dollar upgrade it does not have an AESA radar and still have a body which has half the life gone and engine which is an old technology. Look at the cost of every hour of sortie and maintanence cost. That is why by buying Rafale IAF is closing its option to be a super power. The upgrade with the conservative estimates would cost 100 plus million and every plane needs that atleast in a decade. Instead there is an option to buy 500 plus LCA mark 2 where the maintanence cost would be same and being a local product can be frequently upgraded and the spare money can be spent on developing AMCA. Small investments in electronic warfare new engines for Jaguars would add lot of punch the air force at low levels the plane can generate speed that Evan f 16 cannot generate at low levels and is not safe for sustained low level flights.research in seekers is one area where air force can get bang for buck. The thinking has to change that no more expensive showpieces but lot of small incremental investments that can give equally good punch.

A very well written article. The toys we get from outside are very expensive to maintain. We need to get basics right: Artillery, medium range rockets, littoral ships to send coast.
We forget world war 2 was by allies with inferior weapons but better industrial cpabilitj and strategic depth.

We are at a point of inflection for combat aircraft. Maybe long range drones aka cruise missiles are a better brt than bond trucks like Huge number of Rafale.