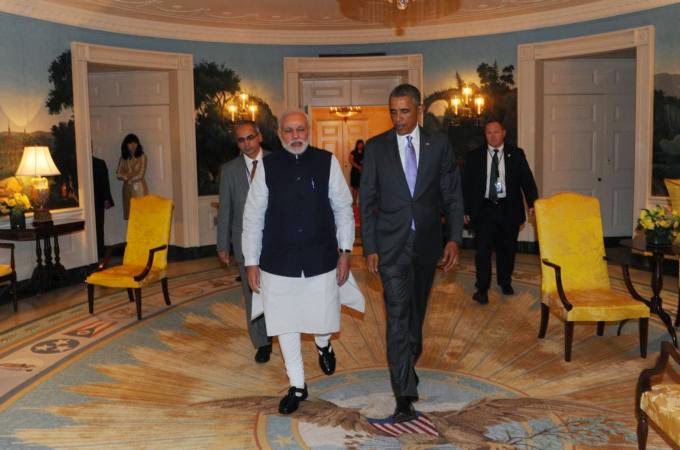 Diplomatic subterfuge makes it seem like defence pact is agreed. In fact, it has only begun negotiation

The US-India defence relationship may turn out to be fruitful in the middle-to-long term, but Prime Minister Narendra Modi’s visit to Washington this week has more intentions than tangible outcomes.

Without any high-visibility signings of agreements and contracts, the two sides apparently resorted to diplomatic subterfuge to make an agreement under negotiation appear like a major step forward.

The US-India joint statement “welcomed the decision to renew for 10 more years the 2005 Framework for the U.S.-India Defence Relationship”. No new agreement has been negotiated so far; this is only a decision to renew the old agreement that expires on 27 Jun 2015.

The renewal of a framework agreement is, in fact, a routine matter. In 1995, Washington and New Delhi signed an “Agreed Minute on Defence Relations”, which was valid for ten years. When that expired in 2005, the two sides signed the “New Defence Framework Agreement”. With that expiring next year, negotiations are under way on a new 10-year pact that will run till 2025.

The decision to renew the pact, and even the negotiation of a draft, began well before the prime minister’s visit to the US. As reported in Business Standard (“Belying optimism, US-India defence cooperation struggles”, September 26), New Delhi had kicked off negotiations in August by initiating a draft that proposed the wording of the new agreement.

The US has responded, with wording of its own. Business Standard learns from sources close to the negotiations that there are significant differences over the draft agreement. While India proposed that the new framework agreement should use very similar wording as the 2005 agreement, Washington is loath to sign an agreement without guarantees of delivery.

The 2005 agreement enjoined both sides to collaborate in 13 specific areas, including: participation in multinational operations; expanding two-way defence trade; expanding collaboration on missile defence; conducting exchanges on defence strategy; and increasing intelligence cooperation. Much of this was anathema for the United Progressive Alliance defence minister, AK Antony. Consequently, chunks of the 2005 agreement existed only on paper.

Responding to frustration within the Pentagon, Washington has signalled it wants a realistic agreement, including a schedule for reviewing outcomes.

There is frustration that the Defence Policy Group --- an apex US-India body that is co-chaired by the US defence secretary and India’s defence minister --- has not met since February 2012. Washington and New Delhi had an understanding that the DPG would meet at least annually.

The DPG is now scheduled to meet in the fourth week of October, with the draft agreement included on the agenda. However, this meeting too has the threat of cancellation looming over it due to Defence Minister Arun Jaitley’s illness.

Jaitley’s visit to Washington this week, in his capacity as finance minister, has already been cancelled.

There is scepticism too over the joint statement’s intention to “reinvigorate the Political-Military Dialogue and expand its role to serve as a wider dialogue on export licensing, defense cooperation and strategic cooperation.”

For years, the Antony defence ministry had refused to take ownership of the political-military dialogue, palming it off to the ministry of external affairs (MEA). For the last several months, the MoD has had no joint secretary in charge of international cooperation --- the chair remains empty even today.

On the positive side, there is reaffirmation that both sides would “treat each other at the same level as their closest partners.” America’s defence relations with country partners vary, depending upon the categorisation allocated to that country. Pakistan, for example, is a “major non-NATO ally”, which allows it to receive various categories of defence equipment from the US.

New Delhi’s aversion to alliances has defied easy categorisation of the US-India relationship. It has been affirmed that India will enjoy the status of America’s closest allies, like the UK and Australia, but without being categorised as an ally.

Hopes for rejuvenating the US-India defence relationship centres mainly on the Defence Trade and Technology Initiative (DTTI). Under this, the Pentagon has made a dozen proposals to the MoD, offering to co-manufacture and co-develop modern defence equipment with India. During Modi’s visit to Washington, the two sides decided “to establish a Task Force to expeditiously evaluate and decide on unique projects and technologies which would have a transformative impact on bilateral defence relations”.

New Delhi has signalled an unusually forthright convergence with Washington in the Indo-Pacific. The joint statement cites India’s “Act East” policy and America’s “rebalance to Asia”, and “affirm(s) the importance of safeguarding maritime security and ensuring freedom of navigation and over flight throughout the region, especially in the South China Sea.”

Tantalisingly, the two sides “agreed to upgrade their existing bilateral exercise MALABAR (sic).” It remains unclear whether the “upgrade” would be in purely military terms, or a political upgrade with the bilateral Malabar exercise taking on a multilateral character. In 2007, China had objected when four countries --- Australia, India, Japan and the US --- had participated in Malabar.

The US committed to facilitating India’s admission into all four global technology control regimes --- the Nuclear Suppliers Group (NSG), the Missile Technology Control Regime (MTCR), the Wassenaar Arrangement and the Australia Group. The joint statement says, “The (US) President affirmed that India meets MTCR requirements and is ready for membership in the NSG. He supported India’s early application and eventual membership in all four regimes.”

However, the right buttons were pressed for New Delhi with the statement, “The (US) President reaffirmed his support for a reformed UN Security Council with India as a permanent member.”
Posted by Broadsword at 06:01

If there were no big ticket deals during PM's visit to US, it was because he must have refused to compromise on national interests.

Sir, The following 13 items as you suggest " participation in multinational operations; expanding two-way defence trade; expanding collaboration on missile defence; conducting exchanges on defence strategy; and increasing intelligence cooperation. ". Can Indian Army take part in operations in Syria without approval of UN under Anmericn Military leadership?This is what some Brass amy like for their own selfish interests. Just because Antony opposed this does not mean it is against Indian national interst. Antony's views are mostly in line with Indian national interest. It is the PIOs who are ready to do the bidding of the country which feeds them are the real problem.

We really need a full time defence minister. Mr. Arun Jaitley is also not in his best , when it comes his health. We need to allow him to,concentrate on Economy

The immediate impact post US visit is that in 16 MRH for Navy, NH Industries has been officially asked to withdraw its techno-commercial bid, leaving M/s Sikorsky,USA as sole bidder..1.5 Bn USD deal....

Modi's visit to the US, though ostensibly at the invitation of US President, was not to establish a relationship with the lame duck President but to sell India to US Investors. And Modi made a direct appeal to US Businesses before he even bothered to interact with the US government. Additionally, the Madison event highlighted the support Modi enjoyed with fat cat NRIs vs the impoverished North East intellectual NRIs who currently hold sway over the Obama Administration. And therefore that begs the question why would Modi throw dollars in defence deals at a lame duck not in a position to reciprocate?