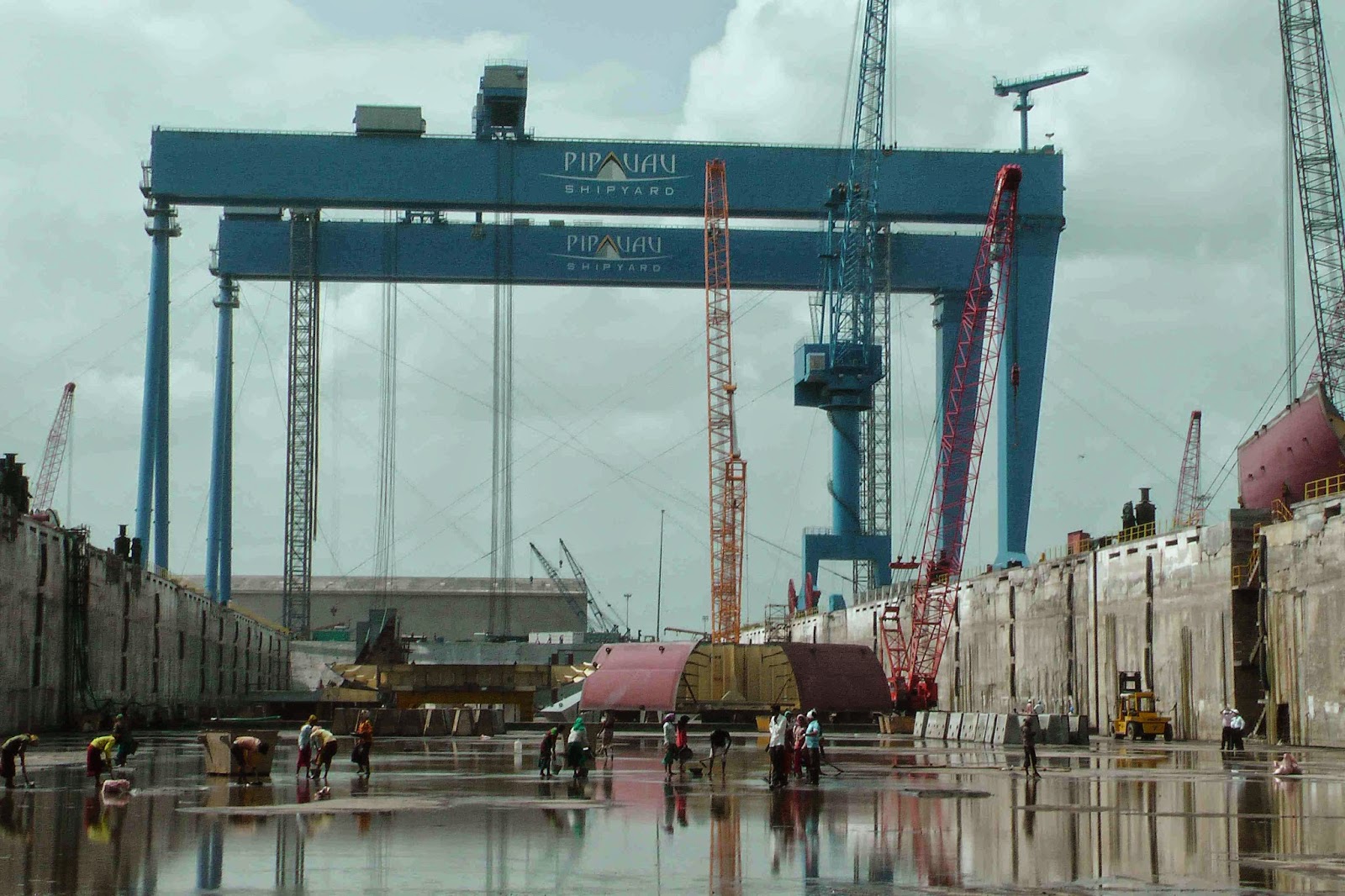 On Saturday, defence minister Arun Jaitley took his best procurement decision so far, relating to building six state-of-the-art submarines for the navy under Project 75I. He ruled that a ministry committee would identify Indian shipyards that had the capability and capacity to build submarines, and the chosen ones would bid, in partnership with a foreign vendor, on a winner-take-all basis. Over the last decade, three committees have been set up for precisely this purpose, but the United Progressive Alliance (UPA) government’s antipathy for tough choices stymied any decision. Now, by giving the committee just six-eight weeks to submit its findings, Mr Jaitley gives us hope that he might be more energetic than his predecessor in filling a yawning gap in our maritime power.

That weakness is the dire shortfall of state-of-the-art submarines. Our powerful surface fleet of some 130 vessels grows stronger every year as Indian shipyards build bristling, multi-role destroyers, frigates and corvettes --- albeit slowly. The Russian-built aircraft carrier, INS Vikramaditya, commissioned last November, flies the MiG-29K, one of the most capable carrier-borne fighters outside the US Navy. In 2018 Cochin Shipyard will hand over INS Vikrant; and then start building a larger, even more capable, indigenous carrier. These three carriers and their battleship escorts will project power far out at sea. Thanks to India’s peninsular geography and to forward air bases in the Andaman & Nicobar Islands, the Indian Air Force (IAF) can support a fleet a long distance away. In short, the surface navy is well poised to exercise “sea control” over chosen parts of the northern Indian Ocean.

Yet we lack “sea denial” capability, or the ability to deny enemy warships, submarines and merchantmen the use of waters that we do not control. Submarines are sea denial instruments, lurking underwater to detect and destroy enemy vessels that happen along. In a war with China, for example, the surface fleet --- operating as aircraft carrier battle groups --- might blockade Chinese oil supplies and trade; while submarines patrol the Indonesian archipelago, denying Chinese warships entry into the Indian Ocean. Other submarines might lurk outside Pakistani harbours, bottling up warships inside.

To build this crucial capability, the government signed off in 1999 on a plan to build 24 conventional submarines over the next 30 years. Although half that period elapsed this year, not a single submarine has joined the fleet. Six Scorpene submarines, built in Mumbai by Mazagon Dock Ltd (MDL), will start being commissioned only in 2016. Even so, they will be without air independent propulsion (AIP) and land attack missiles until those capabilities are retrofitted. Meanwhile, the navy makes do with nine ageing, Russian, Kilo-class; and four German HDW submarines.

The UPA’s procrastination with Project 75I did not stem from a profusion of choices. There is agreement that just two Indian shipyards can build modern submarines: the public sector MDL, because of the experience of building the Scorpene; and private sector engineering giant, Larsen & Toubro (L&T), which has worked on India’s nuclear ballistic missile submarine (SSBN) programme for two decades. With MDL busy with the Scorpenes, the navy had been urging the ministry to let L&T bid for Project 75I, in partnership with a foreign vendor that met the technical and financial requirements. Yet the ministry’s department of defence production (the DDP directly oversees MDL, a major conflict of interest) assiduously undermined L&T’s chances. The DDP illogically insisted that L&T’s Hazira shipyard, which had built large sections of the bigger and far more technologically challenging SSBN, INS Arihant, was inadequate for building a smaller conventional submarine. Until Mr Jaitley intervened, Project 75I was going to be built as follows: two submarines abroad, and four by MDL.

Meanwhile, L&T has built an Rs 4,500 crore shipyard-cum-port at Katupalli, near Ennore, Tamil Nadu, with sufficient draft and capacity to build any size of submarine. It has also established a submarine design centre in Chennai and a virtual reality centre in Mumbai. For good measure, it created a Rs 500 crore fabrication unit at Talegaon, near Pune; and a Rs 350 crore unit at Coimbatore for engineering missile parts. Locating Katupalli shipyard on the east coast was a smart move by L&T, since that distributes the risk of disruption to production.

With the defence ministry looking to identify an Indian shipyard, it must also think hard about the foreign technology partner. Traditionally, the choice has been between “eastern bloc” and “western bloc” weaponry, i.e. Russian or European. Today, however, other potential choices present themselves --- notably the Japanese Soryu-class submarines that many experts consider the world’s finest conventional submarine. There remain questions about its high cost; and Tokyo’s willingness to transfer Soryu-class production and technology to India. Even so, New Delhi must consider the Soryu’s technological edge, the growing strategic embrace with Tokyo, and the likelihood that prices could be lowered if Japan’s own production (five planned) were boosted by simultaneous orders from India (six or more) and Australia’s planned purchase of up to twelve.

Finally, if Mr Jaitley does take the strategic decision to establish one private sector submarine line on the east coast (L&T), in addition to a public sector line on the west coast (MDL), it must keep the Scorpene submarine line rolling even after MDL delivers the sixth and final vessel in 2019-20. More Scorpenes are only to be welcomed; and New Delhi could negotiate tough with DCNS, insisting on enhanced technology transfer and a greater share of production as a precondition for ordering 4-6 more.

Finally, in developing two submarines lines, the defence ministry must keep the future in mind. The 30-year submarine plan stipulates that the manufacture of 12 submarines (Project 75 and 75I) must lead on to indigenous production, with 12 vessels to follow that have been designed and built in India.
Posted by Broadsword at 20:33

India must take into account the docking of chinese Nuclear submarine in Colombo. Let us not get fooled by what the Government of Sri Lanka states. We must watch its actions.Mrs Gandhi developped LTTE only because the Sri Lankan government at that time sided with Pakistan in 1971 war and before that with USA when we were friends with erstwhile Soviet union. It is not Tamilnadu politics which is making hostage to Sri Lankan policy but the inherent Hatrred of Sri lankan Chauvinism towards India due to its Tamil polpulation. India must also think about connecting Arabian sea with Bay of Bengal as a national security imperative whatever may Mr.Subramani swamy say.

Why not ask the US to build some subs for us??

Dear Sir, L&T will be a better choice, as we must take into consideration that INS Sindhukriti is rusting at Hindustan Shipyard Ltd. After stripping out the submarine, they couldn't assemble back. So, making new submarines with such capability is questionable for PSUs.

The experience gained in scorpene project in MDL must be utilised at the fullest. A better option would be follow-on production of SMX_Ocean (by DCNS) recently unveiled at Euronaval 2014. The nuclear subs & P75i production may continue side by side at HSL & L&T(expected) respectively.

It is a very good decision to maximise value addition in india. I Hope every decision is taken on same basis and there is a backward integration into critical electronics too.

Soviet union should provide us kursk like stealth subs....they had mothball many...in the 1990's due to economic problems...

Why not ask the soviet union to provide us the kursk stealth technology under transfer of technology....they had mothballed many subs during the 1990 economic crisis ....

How can this be the best decision? Its better than UPA but not the best decision. Once, these 6 & another 6 scorpene SSK's will be inducted in the next decade, it will be nothing but replacement for the present 8 kilo class and 4 HDW class SSK's. Even after a decade, the Indian navy will still have 12 SSK's against China's 51 SSK's and around 8 SSN & 6 SSBN's already in their fleet. Assuming we will be able to build another 12 SSK's based on these 2 sub's, it will still be inadequate. To fix the growing gap with PLAN, We need to order 24 SSK's each from 2 vendors. 12 should be imported and another 12 should be made in India. Scorpene deal should also be increased to 24. This will take the SSK strength to 72. This will help counter both PN and PLAN, even after further induction by them. 36 SSN's should also be built as part of the Carrier Battle Group. Another 36 SSBN's should be built to have a credible second strike capability. This should be done in the next 2 decades.

anon @ 11:42, hope you were not being sarcastic. The US, does not sell submarines to anyone in the world, even their closest allies, Britain. They consider the submarine technologies that they have to be too sensitive to share with anyone, even Britain.

continue producing scorpene with AIPand Vls at MDL AND OPEN SECOND LINE FOR GERMAN HD-216/218 ALONGSIDE OR JAPANESE SORYU AT PIPAVA .
THE L$T BE GIVEN RUSSIAN SSK ORDER FOR 6 LADA AND THEN UPGRADED TO BUILD SSNS

POEMS ACTSGEcontinue producing scorpene with AIPand Vls at MDL AND OPEN SECOND LINE FOR GERMAN HD-216/218 ALONGSIDE OR JAPANESE SORYU AT PIPAVA .
THE L$T BE GIVEN RUSSIAN SSK ORDER FOR 6 LADA AND THEN UPGRADED TO BUILD SSNS

To anon at 11:03 and others
Subs are expensive. Really.
Ordering 24 for outside etc is kinda backbreaking. No?
Slow n steady... keep increasing in house manufacturing capacity. 2 lines with this.. increase to maybe 3 lines - 3rd one being completely indigenous.
Keep manufacturing to ensure basic deterrence role till capacities mature.

"[...] it must keep the Scorpene submarine line rolling even after MDL delivers the sixth and final vessel in 2019-20."

Given the above, this does not result in a particularly strong position for the following:

" and New Delhi could negotiate tough with DCNS, insisting on enhanced technology transfer and a greater share of production as a precondition for ordering 4-6 more."

I think people are commenting using the bean counting. Suggestions of 24, 36, 72 subs are mind boggling. Even if we use every penny of our defense, that wont suffice for such payments!. 50 or 70 subs by China doesnot make difference, many of them are themselves 3 decades or more older, and serve as traing/experimental ships and at best for coastal patrolling. But what is more important is that China has an active nuclear sub program (their conventional ones are not that spectacular and can be guessed by their own order of the Amurs from Russia), which is improving over time and started to roam far off distances. What is required is the capability of sea denial. 24 submarines for the capability belongs to 20 years back, which does not account for SSN and SSBN, not to mention the improvements in technology. A judicial mix of conventional/second gen-AIP submarines with nuclear attack subs (SSN) would be the best choice for atleast next 20-30 years. I believe 10-15 modern conventional subs plus 5-8 SSN would make the maths. In that way 6 scorpenes + 6 p17i would make conventional ones (of note we will still have 4-6 kilos for at least 10+ years). But still badly lacking any SSNs for long-deep range patrols. on the SSBN requirement also we are still far away at least 3 follow-on Arihant by 2030 would be good enough. I would wish it to be earlier, but unfortunately great navies are not made in a day.