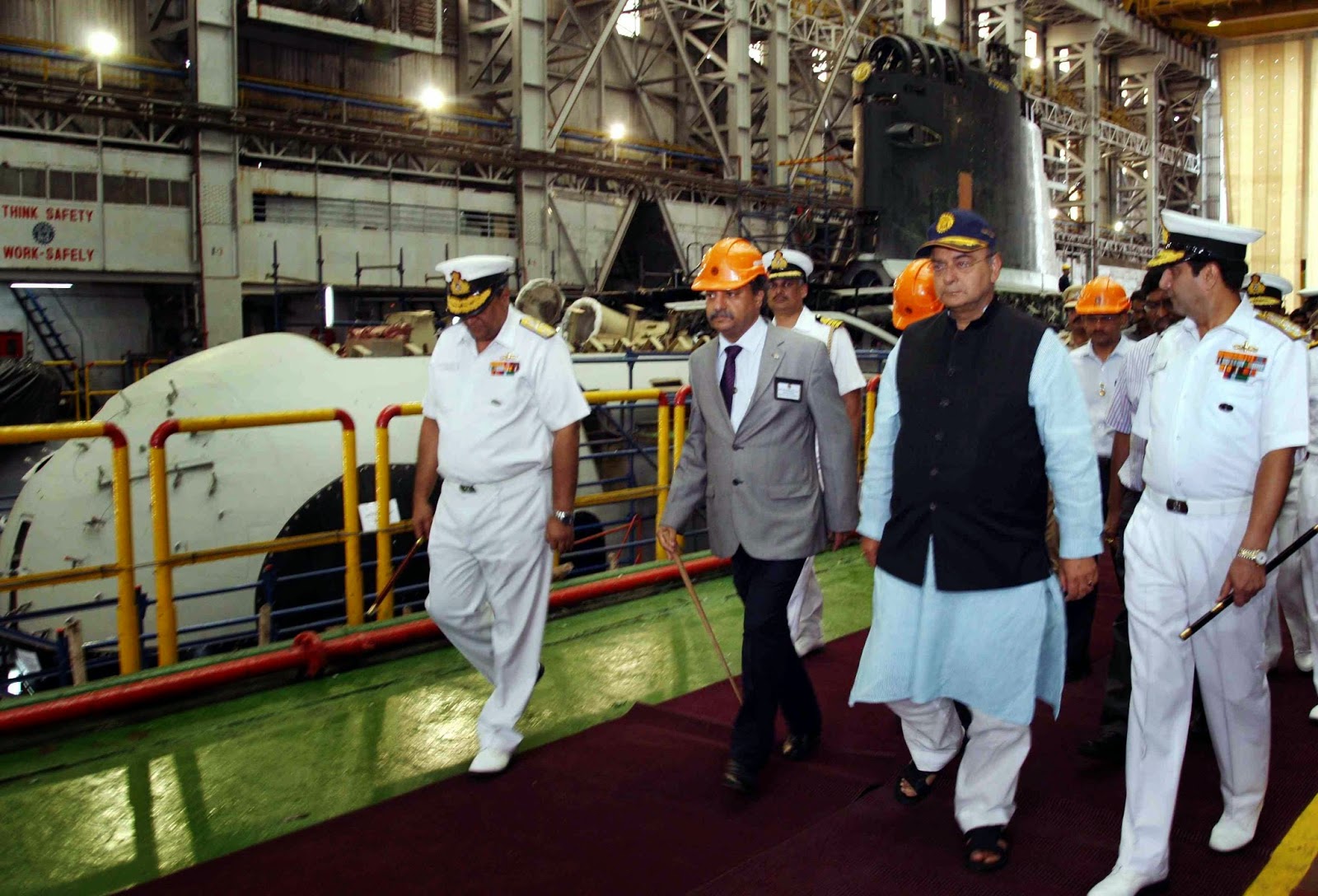 The ministry of defence (MoD) on Saturday took a major step to address India’s critical submarine shortage,. A committee has been set up to evaluate which Indian defence shipyards can build six high-tech, conventional submarines under Project 75I at an estimated cost of Rs 50,000 crore.

The government has also cleared the procurement of the Spike anti-tank missile from Israel, effectively rejecting the US proposal to co-manufacture the Javelin missile and then co-develop a next-generation version of the Javelin for the US and Indian militaries. The government has also cleared several smaller projects whose worth, according to ministry officials, totals Rs 80,000 crore. The details of these smaller approvals, though, are not immediately available.

Highly credible MoD sources say the shortlisted shipyards will be invited to submit bids, in partnership with a foreign shipyard that meets the navy’s specifications for the submarines. These include air-independent propulsion; the capability to fire land attack cruise missiles; and advanced stealth features that make them hard to detect.

Project 75I stems from a “30-Year Submarine Construction Plan”, approved by the cabinet in 1999, for constructing 24 conventional submarines in India. Two separate construction lines were to build six submarines each, one using western technology; and the other with Russian know-how. Based on this experience, Indian designers would build the next 12 submarines.

So far, only six submarines are being built under Project 75 --- the Scorpenes at MDL.

Further production has remained stalled, with three committees having been constituted by the defence ministry to identify Indian shipyards that can build Project 75I. In 2003, a committee, under a defence joint secretary, cleared L&T and MDL. Yet, in 2008, a similar committee ruled out L&T.

So incensed was the private engineering giant, which is playing a leading role in building India’s nuclear submarine, INS Arihant, that the chairman, AM Naik, met then prime minister, Manmohan Singh, to protest. That led to the setting up of a third high-level committee, headed by the National Manufacturing Competitiveness Council chief, V Krishnamurthy, which again cleared L&T and MDL.

Meanwhile, to ensure early delivery, the Indian Navy has pushed for building two submarines abroad, while the domestic manufacturer absorbed technology and cranked up production. Now, in keeping with the Modi government’s “Make in India” policy, and in accordance with the 1999 plan, it has been decided that all six vessels will be built in India.

Gone too is the impractical United Progressive Alliance (UPA) plan to divide production between two public sector defence shipyards (MDL and HSL) --- a device proposed by then defence minister, AK Antony, to keep HSL in business. Instead, a single shipyard will build all six submarines.

The big potential gainer from today’s decision is L&T, which is back in contention for winning, single-handedly, Indian warship-building’s largest-ever order.

Speaking to Business Standard today, MV Kotwal, L&T’s defence business chief, said: “L&T would welcome any decision to evaluate Indian shipyards for both capacity and capability in building submarines. We have both the infrastructure and the experience in our Hazira shipyard, and also in our new Katupalli shipyard (at Ennore, Tamil Nadu). Most importantly, we have established a state-of-the-art submarine design centre in Chennai and a virtual reality centre in Mumbai, both essential for Project 75I.”

Separately, Business Standard learns the MoD has cleared the Rs 2,000 crore procurement of two midget submarines, used for special operations like landing commandoes on enemy shores. It is likely that HSL Visakhapatnam, the defence ministry’s newest shipyard, will build these in partnership with a foreign vendor.

In another major decision on Saturday that is loaded with politics, the MoD has cleared the procurement of the Israeli Spike anti-tank missile for the army’s infantry battalions to destroy enemy tanks. MoD sources say the Rs 3,200 crore contract is for about 300 launchers and more than 8,000 missiles. Production facilities will be established in Bharat Dynamics Ltd, Hyderabad.

This constitutes a flat rejection of the US proposal to co-manufacture the Javelin anti-tank missile in India and, unprecedentedly, co-develop with the Defence R&D Organisation (DRDO) a next-generation version of the Javelin. That proposal was made under the Defence Trade & Technology Initiative, a high-level defence channel established to boost defence ties between New Delhi and Washington With the US lobbying New Delhi at multiple levels, including during Prime Minister Narendra Modi’s recent visit, this is an unmistakeable snub for Washington.

Amongst other procurements cleared are: 363 new BMP-2 infantry combat vehicles from Ordnance Factory, Medak, for the army for Rs 1,800 crore; 761 radio relay containers for army communications for Rs 662 crore; 1,768 railway wagons for Rs 740 crore for quickly moving army units over long distances; and 12 additional Dornier aircraft for the navy, which Hindustan Aeronautics Ltd (HAL) will build for Rs 1,850 crore.

Speaking at the MoD’s apex Defence Acquisition Council (DAC) on Saturday, where the procurement decisions were made, Defence Minister Arun Jaitley said “National security is a paramount concern for the government. All hurdles and bottlenecks in the procurement process should be addressed expeditiously so that the pace of acquisitions is not stymied.”

Freaking awesome!
We need to make sure now that we become increasingly self-reliant when it comes to defence related productions!

Surely we are making mistakes, and we will make more mistakes but these mistakes will teach us and give us experience!

Let's get it going! Let's be strong enough to actually be able to call ourselves in real terms a 'regional' if not global 'Superpower'!

As it has been in our history, with all our might we shall not attack anyone but we should be fierce enough that when somebody does, he gets a disproportionately dangerous reply!

I am a fan of Mahatma Gandhi and I totally believe in his principles! But then I am also fan of Hitler!

Haha... Col. Shukla's Freudian typo is showing-mentioning Javelin missiles in the table when it should be Spike.

And defence journos bristle at the mere suggestion that they are part of the "lobbying industry".

Sir, plz tell me why indian army chose old BMP 2, and what the project next gen infantry vehicles. Does india govt. also scrapped this project

Secretary Defence Production is one of the interested party and hence should be kept out of Search Committee to identity shipyard to build submarine.

There is no fresh thinking in Indian Government. The Honourable Defence Minister, who is also Finance Minister of India would have done better, if decisive actions for disinvestment of Bharat Dynamics Ltd. was initiated while procuring missiles from Israel. Why BDL is not exporting such successfully developed missiles as Akash, Nag etc. This is only due to influence of foreign arms dealers.
Indian government must initiate actions for disinvestment of Defence PSUs. Defence PSUs must increase manufacturing capacity and start exporting its products.
I wish Honourable Prime Minister of India signs an agreement to sale ten Dhruv / Rudra helicopters during his next visit to Myanmar.

That is what your table says:

Correct it if you will

You're clearly a part of the "moron industry" if you think lobbying is done through articles on blogs.

What is the next step for light helicopters ? Who are possible manufacturers ? This is supposed to be in addition to 187 made by HAL.
Airbus wants to tie up with TATA fit light transports planes

Ajai shills ji,
What anon at 10:17 was hinting was that your typo was equivalent to a wife screaming her lovers name rather than her husband's name in the bedroom. Which might have been done unknowingly, but does spill the beans
-raju

If the Scorpene technology is REALLY transferred, then India should have no problem producing them in serial numbers until the shortage is over...

Expand shipyard and start ordering long lead items and then one submarine will start coming out every year...

Since no one talks about it, I think technology is not transferred or balking at transfer...

Does any one has any different info and idea?

It is indeed a good idea to establish a second line of submarine production with a different country and with different technology, and of course with full transfer of technology...

Russians seems to be interested in offering Amur but with some produced in Russia...
I think they will jump on this contract as they do not want to lose India forever in submarine business...

However, this RFP would take many years to sort through so please start building more Scorpenes...
That would be better than not having enough submarines...

Also, Japanese are selling Soryu class submarines to Australia so we should try to ask them to bid and this is the best time to rope them in...

What is your take on India's rejection of Javelin missiles? Were there technical reasons behind this decision? Or this govt. only formalized the decision based on the work done by the previous government?

Good decision. Never join hands with US for TOT. Build in India is welcome change. I also think MMRCA has got too costly now. Do we really need Rafale aircrafts.

I'll be honest with you. I've never had the experience (as you clearly have) of my wife screaming her lover's name in the bedroom.

In my case, a typo is just a typo.

Ajai, whats the difference between 'Buy in India' and 'Build in India'?

Great news should have been done by the previous government.
There is obviously time before the deal actually goes through and a lot of time before we get the first sub.
I think we should go with the German Sub as it is non-metallic and virtually impossible to detect.
Till then it is also important to maintain a minimum acceptable sub force, I think it would make great sense to go in for 6 Kilos from Russia. We would not need buy weapons for them just transfer them, also if we replace an scrap 6 old kilos we could get a lot of spares for smooth running of these boats. With this we would be able to hit 30 subs in the foreseeable future not immediate I assume. Although I think Russian stuff is rugged but crude but with their inclusion we could curtail the dropping numbers.
Also some talk of the Rafale, although it is an amazing bird but it doesn't fit the bill. 200+ Tejas could be better in terms of number fillers.
500 Dhanush guns another good consideration, this would be all Made in INDIA.

correction non-magnatic was what I meant.

There are other blogs (trident) reporting that the missile deal is just for SF and newly created mountain div. Also, that Javelin still will be in competition to equip 360 odd infantry battalions. Is it right information?
Regards

Based on your experience with Armor , what is the relevance of armored personnel carriers, when today we have Mine resistant vehicles ? As I understand (kindly correct me if I'm wrong) prolonged campaigns of any war will occur in urban areas as seen in Afghanistan,Iraq and Syria where the main threat is IEDs. Here it is proven that Mine resistant vehicles offer better protection perhaps even better than MBTs leave alone BMPs or Bradley fighting vehicles. protection against enemy MBTs , neither can survive main gun rounds. Mobility ? Hands down MRVs win. Battle field recovery, salvage and repair ? MRVs win. Amphibious Capabilities ? BMPs win. Armament ? Heavy caliber canons and ATGMs can be fitted on both. So what is the relevance of BMPs today ?

My apologies on spellings and formatting typed on phone.