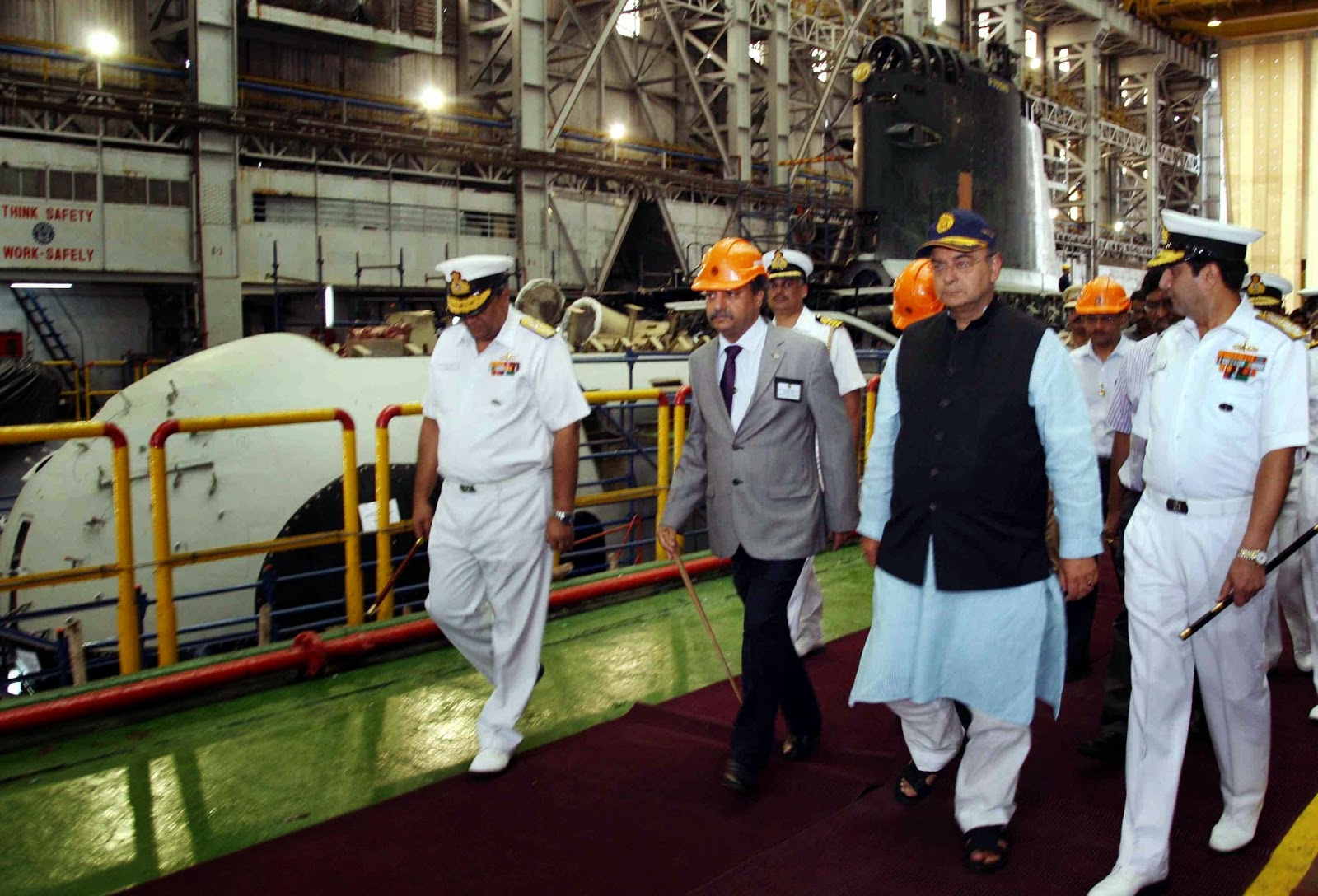 Naval warfare experts agree the Indian Navy is capable of obtaining “sea control” --- or domination of waters and airspace --- in the Arabian Sea in a war with Pakistan. Equally, India can dominate China’s sea lines of communications (SLOCs) through the Indian Ocean, cutting off trade, oil and commodities. This ability stems from India’s aircraft carriers and the proximity to naval and air bases on Indian territory. (See Part 1 of this series: “Indian navy: strong on aircraft carriers, short of submarines”, September XX)

Yet a bleaker picture emerges of the navy’s ability for “sea denial” --- bottling up enemy shipping in a particular area; or blocking it from moving through a passage; or preventing the enemy from using the seas freely. Submarines are vital for sea denial, lurking unseen, menacing enemy shipping.

India’s fleet of 14 submarines is too small to blockade Pakistani ports and interdicting its SLOCs at the Strait of Hormuz and Gulf of Aden; while also blocking China’s navy --- the People’s Liberation Army (Navy), or PLA(N) --- from crossing into the Indian Ocean through the narrow straits that provide access from the South China Sea. These include the Straits of Malacca, Sunda, Lombok and Ombei Wetar.

For all this, India can muster just 8-9 submarines, given the on-going need for maintenance and refit. Submarine availability was further damaged on Aug 14, 2013, when a Kilo-class vessel, INS Sindhurakshak, blew up in unexplained blast in Mumbai. Another, INS Sindhukirti, has been in refit since 2006 in Hindustan Shipyard, Visakhapatnam.

Meanwhile, even as India’s surface fleet grows, new submarines are not coming fast enough. Six Scorpene submarines that Mazagon Dock Ltd, Mumbai (MDL) is building under Project 75 will only roll out in the second half of this decade. Another six submarines being acquired under Project 75I will join the fleet only in the next decade. By then, today’s ten Kilo-class and four HDW submarines would begin retiring, with many having exceeded 30 years of service. The fleet will plateau at about 20 submarines, if more are not quickly bought or built.

In contrast, the PLA(N) has 53 conventional submarines, the majority capable of firing anti-ship cruise missiles, according to the latest estimate from the US Office of Naval Intelligence (ONI). Furthermore, China is developing the new Type 095 submarine that can also strike land targets. Meanwhile, its fleet of five nuclear attack submarines (SSNs) is being expanded to 16-20 vessels.

Pakistan’s submarine fleet is growing too. China is selling Islamabad six Type-041 Yuan-class submarines to supplement its five existing submarines, which include three advanced Agosta 90B vessels, with air independent propulsion. AIP makes a submarine more dangerous than the diesel-electric variety, which must “snorkel” more often --- or come up to the surface to recharge its batteries. India will get its first AIP submarines only in 2018-19, when the Scorpenes start being built with this new-generation propulsion system.

Former navy chief, Admiral Sureesh Mehta, points out that enemy submarine strength is not countered by acquiring more of ones own. Instead, submarines are countered by building anti-submarine warfare (ASW) capability --- which consists of specialist vessels; ASW capability on regular warships and helicopters; and maritime reconnaissance aircraft that can locate, pinpoint and destroy submarines.

Submarines, when submerged, are detected mainly by sonar equipment. This emits sound waves into water, and listens for reflections from the hull of any submarine in the vicinity. Once located and identified as an enemy submarine, it is destroyed with torpedoes or depth charges.

Here lies the navy’s most critical vulnerability. As this newspaper first reported (“Warships in peril as defence ministry blocks sonar purchase”, May 16, 2014) every Indian warship built since 1997 lacks advanced towed array sonar, or ATAS, crucial for detecting enemy submarines in the peculiar temperature and salinity gradients on our western seaboard. Since the Defence R&D Organisation (DRDO) was developing an indigenous ATAS, the defence ministry blocked its purchase from the international market. In the absence of ATAS, undetected submarines can pick off Indian warships with heavy torpedoes from 50-80 kilometres away.

On Aug 30, after a firestorm of media criticism, the defence ministry cleared the procurement of ATAS from the international market. Even so, the procurement process, supply and fitment would take several years more.

Another critical ASW vulnerability is the shortfall of multirole helicopters, which operate from warships to detect enemy submarines with “dunking sonars” that the helicopters lower into the sea. India has just a handful of these helicopters in service, but the purchase of replacements has remained stalled for years. Last month the defence ministry cleared an initial purchase, but the helicopters will take years to materialise.

The only bright spot in India’s ASW capability is the induction of state-of-the-art long-range maritime patrol (LRMP) aircraft that are effective submarine hunters. India will have eight Boeing P-8I LRMP aircraft (possibly 12 if an options clause is exercised) bought from the US to supplement eight ageing Russian Tupolev-142s (Pakistan uses the P3C Orion). LRMP aircraft patrol vast swathes of ocean, dropping “sonobuoys” into the water where a submarine presence is suspected. The sonobuoys detect submarine movements and relay its location to the LRMP aircraft, which then destroys the submarine with depth charges or torpedoes. Alternatively, it can direct a strike by another warship, submarine or aircraft.

To be sure, the US Navy --- the world’s most advanced --- operates an all-nuclear submarine fleet. Yet, India’s geographical and operational circumstances demand a mix of conventional and nuclear submarines. The Bay of Bengal, on India’s eastern seaboard, has a continental shelf that drops steeply from the coast, the deep water making it suitable for operations by bulky SSNs, most of which displace 7,000-13,000 tonnes.

On the west coast, the continental shelf tapers gradually into the Arabian Sea, with the shallower water unsuitable for SSNs. Here, the smaller conventional submarines --- India’s Kilo-class displaces 3,000 tonnes, and HDW submarines less than 2,000 tonnes --- can move more freely, especially in coastal waters. They are also quieter than SSNs, making them suitable for sea denial.

This is not to say that, SSNs cannot be employed in the Arabian Sea. Far out at sea, they are ideal for protecting the flanks of a carrier battle group (CBG). They would lurk at a distance --- operating submerged for indefinite periods --- to warn of approaching enemy warships and submarines.

India has no official project to build SSNs. Even so, the on-going Advanced Technology Vessel (ATV) project, under which India’s SSBN fleet is being built, is gaining the technological expertise needed for an SSN project in the future. Meanwhile, operational expertise and experience is being accumulated on a Russian SSN --- a 12,770-tonne Akula II submarine, named INS Chakra --- taken by India on a ten-year lease in 2012 for $900 million.

Senior admirals, keenly aware of the navy’s shortfalls in sea denial and anti-submarine capabilities, put on a brave front, arguing that effective sea control also creates sea denial. True, a CBG exercises sea control over hundreds of thousands of square kilometres. But there are always crucial areas, far away from the CBG, where sea denial is essential.
Posted by Broadsword at 06:44

What happened to plans of buying Soryu class submarines from Japan? They are the best DE submarines in the world and given enough push, India can produce them locally. L&T or Pipavav or anyone else can get into a JV and produce. Then it will have additional scope for exporting them to Australia, when time and opportunity arises.

Why is MoD going so slow again? Why can't the government appoint a full time Defence Minister?

We would not have faced this problem had we continued with the HDW project in the 1990s.

Why are they all carrying a stick?

Unlikely Pakistan will be able to afford six type 014 from China. Their current state of economic affairs won't allow that to happen. Also China will not sell them for free.

The story is not limited to Submarines or Sonars alone. It is in Artillery, Fighters, Light helicopters and even ammunition.

No country can expect to 'buy' and aspire to become a Super power. The Great Powers will sell but always ensure that we don't have the optimum capability be it Submarine or Fighter or SONAR or Artillery.

Artillery and Submarine are a glaring example of our huge gaps in our preparedness.

Many would agree but wont it make sense to keep project 75 I maturing till it is actually signed and as a stop gap purchase and build 6 Super Improved Kilo Subs from Russia just like Vietnam has done (it would be around $2 Billion) we can also transfer the weaponry from the existing ones so it would save us money. If I am not wrong even Spain offered help to jointly manufacture subs in India, this would impart crucial technology in sub building. We however remain dreamers not doers. Back to the topic; 6 Conventional Subs and 6 SSN besides Project 75i will see us through.