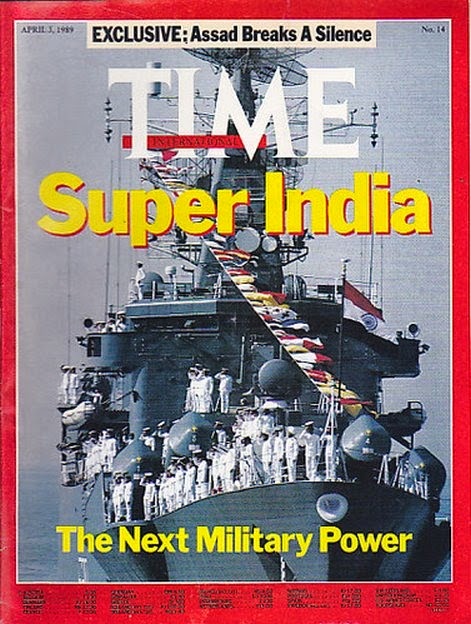 A day after the Indian Space Research Organisation (ISRO) highlighted India’s scientific capability by placing the spaceship, Mangalyaan, in orbit around Mars, another milestone in indigenous design was celebrated in New Delhi on September 25: The 50th anniversary of the Directorate of Naval Design (DND).

Even as the air force and army import the bulk of their equipment requirements, the DND has spearheaded the navy’s striking success in “making in India”. Over the last half century, it has produced 19 separate designs --- from small coastal vessels in the 1960s; through increasingly sophisticated frigates and destroyers, to India’s first indigenous aircraft carrier, INS Vikrant, which Cochin Shipyard is currently building.

“Over the years our naval ship designers have designed, and our shipyards have constructed, 119 warships,” said navy chief, Admiral Robin Dhowan, while felicitating the DND today.

After independence, when the navy took the far-reaching strategic decision to build, rather than buy, its warships, a Corps of Naval Constructors was set up in 1956. In 1964, this evolved into the Central Design Office, the forerunner of today’s Directorate of Naval Design.

Tellingly, neither the army nor the air force have their own design agency --- and they have achieved little success in indigenisation. Analysts are unanimous that the DND, with its present corps of 350 uniformed warship designers, has been instrumental in the navy’s successful indigenisation.

Its first major success came in the late 1970s, when it designed the Godavari class frigate. For a decade before that, the DND had cut its teeth on the British-designed Leander-class frigates, which were being built in India. The last two Leanders featured modifications by the DND, especially to their helicopter deck.

Even so, experts were taken aback by INS Godavari. A heavily armed frigate that weighed 1,000 tonnes more than the Leanders, the 3,600-tonne Godavari could actually sail faster than the highly regarded British warship.

On 3rd April 1989, the cover of Time magazine featured INS Godavari, with a cover story entitled, “Super India: The Next Military Power.”

Buoyed by the Godavari, the DND began developing the ambitious 6,200-tonne Delhi-class guided missile destroyer in the late 1980s. The three warships of this class --- INS Delhi, Mumbai and Mysore --- are acknowledged as exceptionally handsome warships. Their sturdy design and sea-keeping ability was also acknowledged when INS Delhi spent two days in a cyclone in the South China Sea, en route to China. Following that came the 6,200-tonne Shivalik class multi-role frigates, which saw increasing levels of indigenization.

“I have had the privilege of serving on each of these classes of ships… As a user I can vouch (for the fact) that these are some very fine ships, very potent ships. I would like to salute the professionalism of our naval designers”, declared Admiral Dhowan.

While lauding the DND, the navy chief pointed out that more should be done to indigenize weapons and sensors --- the so-called “fight capability” of a warship. India has indigenized 90 per cent of its warships’ “float capability”, or its hull structure; and 60 per cent of their “move capability”, or engines, transmission and propellers. However, only INS Kamorta has fitted a range of indigenous sensors and weapons to emerge 90 per cent indigenous.
Posted by Broadsword at 06:52

THE GREAT DESIGN BUREU HAS CONSTRUCTER OFFICERS WHO OVERSEE SHIP CONSTRUCTION AND ARE KEPT WEEK KNEED AND WITH NO POWERS SO THAT THE GREEDY BUSINESS HOUSES , CLEVER BABUS , SOME UNIFORMED PERSONNEL AND SHIPYARD EMPLOYEES ALL PLUNDER DURING A NEW CONSTRUCTION OF A SHIP BY SIPHONING CRORES OF RUPPEES BY DELAYED ORDERS FOR MACHINARY , POOR TIME LINES OF CONSTRUCTION WHERE THE LABOUR COSTS SKY ROCKET AND A SHIP COSTING 20 CRORES ENDS UP DUE TO MISMANAGEMENT AND NO COSTING AS A 150 CRORES UNIT . USING AMERICAN , JAPANESE KOREON OR EUROPREON STANDARDS EVEN TODAY SHIPS BEING BUILT FOR 35000 CRORES CAN BE BUILT FOR 1000TO 1500 CRORES IF ONLY COST ACCOUNTING , PLANNING , CONSTRUCTION FACILTIES , OVERSEEING , DESIGN MODIFICATIONS AND MANUFACTURE OF MACHINARY IN UNITS NEAR BY SHIPYARDS IS DONE. WORLD CLASS STANDARDS CAN BE ACHIEVED , FOR EXAMPLE . INDIA STILL DOES NOT MANUFACTURE GAS TURBINES . DISEAL ENGINES ARE DONE IN COLLABORATION WITH PIELISTICKS BY KIRLOSKER AT PUNE . NEW GEN STEAM ENGINES NEED TO BE MANUFACTURED BY THERMAX , OR OTHER BOILER MAKERS . PROPELLERS AND SHAFTS ARE STILL IMPORTED FROM UKRAINE AND RUSSIA . IF ONLY THESE FACILTIES TO MANUFACTURE ON 5 TH AND 7TH AXIS GEN CNC MACHINES ARE DONE BY L&TOR SOME OTHER AGENCY NEAR TO A SHIPYARD AT PIPAVA OR CHENNAI, TIMELINES CAN BE COMPRESSED . MANUFACTURE OF 127MGUNS , SSMS , SAMS TORPEDOES , SONARS AND OTHER ELECTRICAL , ELECTRONIC EQUIPMENT BE DONE IN FACTORIES NEARBY THE SHIPYARDS . FINALLY THE PRODUCT SUPPORT CENTRES HAVE TO BE SET UP AT KARWAR , VIZAG , MUMBAI COCHIN GOA AND OTHER PLACES . THE NATION HAS THE WHEREWITHALL , BRAINS , SCIENTISTS , DESIGNERS , ENGINNEERS BUT INDUSTRY AS WHOLE IS NOT INTEGRATED INTO SHIPBUILDING AND REPAIRS BECAUSE OF THE COLONIAL ILLETRATE IAS BABUS AND MASSIVE EGOS OF NAVAL OFFICERS . THE RESULT BIG BUSINESS HOUSES WITH QUALITY AND NAME ARE SHY TO GIVE BRIBES AND WASTE TIME IN THE SLOW SLUMBERING SYSTEM AND THIRD RATE SHADY COMPANIES CONTROLLED BY BABUS POLITCANS AND SERVICE OFFICERS MAKE HAY . THE QUALITY OF SHIPS IS POOR WITH MANY QUALITY CONTROL ISSUES ESPECIALLY COMMERCIAL USE OF ELCTRICAL CABLES WHICH ARE NOT ARMOURED AND CHEAP MATERIALS WHICH IN WAR WILL COST LIVES OF OFFICERS AND MEN WHO MAN THESE SHIPS .

Kudos and congratulations on a brilliant endeavor, well executed by the Department of Naval Design.

I hope it inspires the other two services as well, to trust their experience and design indigenous (even unique) weapon platforms and systems. This will bridge the experience gap faced by DRDO,HAL and other government agencies. These agencies instead of receiving GSQRs or ASQRs, could receive designs which they can materialize by leveraging their skill and core competency. It will also serve as a win win workable solution to prevent turf wars and forced acquisitions.

The Army particularly is most well positioned for such an approach as India already has a vast eco system to materialize such designs. (CVRDE, DRDO, OFB, BEML, DLRL, HVF, ARDE, In the Army they have various Training centres and speccialized warfare schools etc)

The Air Force should leverage its inherent advantage of dual use (as Aircraft related testing and mfg eco system can be used for a civil aviation purposes too) nature of its type of equipment to partner with govt and industry to develop testing and manufacturing facilities. (HAL served as Blr airport too, ISRO could help too).

Let us aim to break free of reliance on other nations, including allies, in all spheres of national development for in achievement of that very aim lies our very freedom, in a 21st century world, as our forefathers did in in the 20th century.

The ability for our children to stand tall on their own and be obligated to no one but our own moral responsibility. To be powerful yet compassionate, influential yet liberal, developed yet humble.

Most impressed with the statistics and detailed info.

HMS Trincomalee is the oldest British warship afloat. The oldest warship in commission and afloat is the USS Constitution (1797).