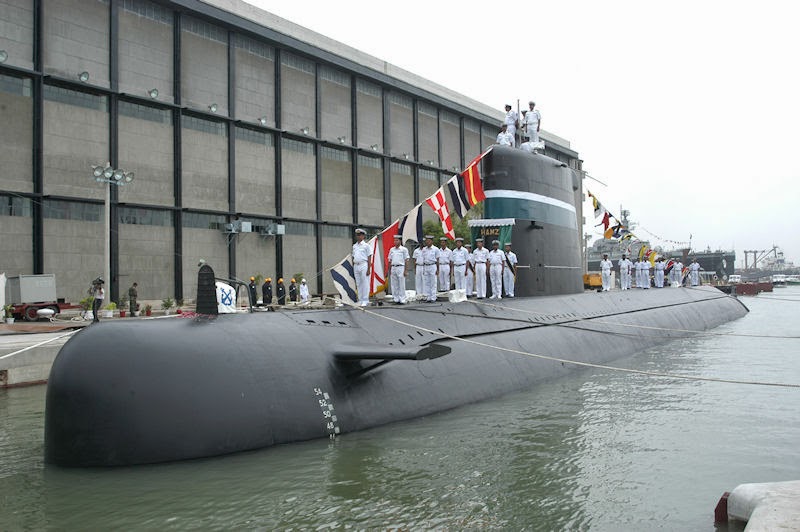 Alongside a three-year delay in adding six new Scorpene submarines to its depleting ranks, the Indian Navy faces an even more disquieting prospect --- the Scorpenes will start joining the fleet in 2016 without their main weapon, the heavyweight torpedo.

Submarines carry two major weapons --- missiles against ships and land targets, and torpedoes to sink enemy ships and submarines. Missiles can be intercepted by anti-missile systems; and they inflict less damage. Torpedoes are harder to intercept and they blast holes below the waterline that quickly flood their targets, sinking them.

Inexplicably, the ministry of defence (MoD) has failed to buy torpedoes to arm the Scorpenes it contracted for in 2005. In 2008, after a global tender, Italian company WASS was selected to supply their Black Shark torpedoes that were specifically engineered for the Scorpene. In 2011, a price was finalised: about $300 million for 98 torpedoes. Yet, even today, the contract remains unsigned.

Consequently, when the first Scorpene submarine is commissioned in 2016, it will be armed only with the Exocet anti-ship missile. Were it to be challenged by Pakistan’s silent new Khalid-class submarines --- the French Agosta-90B --- the Scorpene will have empty torpedo tubes. Even if the new government signs the contract quickly, delivery would be unlikely before 2017.

The MoD did not respond to Business Standard’s emailed questions.

A top-level navy planner laments the MOD’s lack of accountability, contrasting it with how former navy chief, Admiral DK Joshi, took responsibility for warship accidents and resigned. Says the naval officer: “If a military person were responsible for commissioning a Rs 4,000 crore submarine without its primary armament, he would be charged with dereliction of duty.”

The delay in signing the torpedo contract followed accusations that WASS had won unfairly, a tactic commonly used by arms vendors who are confident the MoD will suspend the contract and order investigations.

Eventually, Defence Minister AK Antony referred the matter to the Central Vigilance Commission, which found no indication of wrongdoing. Even so, the MoD continues to stonewall.

The prospect of an unarmed Scorpene has sent alarm bells through a navy that is down to just 11 submarines, against a minimum of 18 that naval planners require for safeguarding India’s maritime interests.

Of 14 submarines in the fleet, three Russian Kilo-class vessels are unavailable: INS Sindhurakshak was destroyed in a cataclysmic explosion in Mumbai last August; INS Sindhuratna will take a year to repair after a fire in February. A third, INS Sindhukirti, was scuttled by Hindustan Shipyard Ltd, Visakhapatnam (HSL), which dismantled the submarine for refit in 2006 but cannot put it back together again.

The navy is furious that a Rs 1,500 crore frontline submarine was lost because the MoD insisted on providing work to HSL, a public sector shipyard without expertise in submarine repair.

Disregarding this experience, the MoD now insists that HSL builds one of the six new submarines being procured under the Rs 50,000 crore Project 75I. Cabinet sanction is being obtained for two to be built abroad and four in India --- one in HSL and three in an unspecified shipyard, probably Mazagon Dock Ltd, Mumbai (MDL).

A senior admiral observes wryly, “INS Sindhukirti has already been destroyed by HSL. Now let us see whether it reduces Project 75I from six submarines to five.”

Even so, the die seems cast. Navy sources tell Business Standard that former secretary of defence production, RK Singh, who became home secretary and then joined the BJP, insisted on HSL’s participation as a condition for Project 75I.

The MoD took over HSL from the Ministry of Shipping in Feb 2010, a white elephant that the latter was glad to forego. The Rajya Sabha was informed on August 24, 2011 that HSL had accumulated losses of Rs 930 crore and a negative net worth of Rs 628 crore.

The MoD is stonewalling another measure that the navy believes essential for overcoming the submarine shortage. With the Scorpene and Project 75I delayed, the navy has proposed extending the service life and providing a mid-life upgrade to the existing submarines, which have exceeded the dives and hours of service that manufacturers prescribe. That proposal has lain with the MoD for six months now, while the submarine fleet becoming increasingly more hazardous to operate.
Posted by Broadsword at 07:09

I feel time is right for putting accountability for criminal negligence on to who so ever decided to gift INS Sindhukirti to HSL allowing it to be ripped open & turned to scrap. If HSL is allowed another submarine under P75I god forbid what will happen.

As for Scorpenes not having torpedos, i had heard the 'saint' RM Anotony has decided to leave it for next govt.

I feel my post in your previous
blog article about submarines is revelant here too. I am reposting it.

As i see if all goes well IN will operate 7 different types of submarines in the next 2 to 3 decades not counting the 2 Akula SSGNs (1 on lease and another to be leased), how? this is how:-

this will be a ultimate logistics nightmare & will pose serious operational handicap (i think). to avoid these the best way forward i feel is to:-

1. let the Shishumar/Sindhughosh retire without further upgrades by 2025
2. build 12 more Scorpenes with AIP (Stirling AIP may be) till 2030 launching 1 sub every 9 months after the current 6 and then add AIP module in the current lot of 6 during mid life upgrades from 2025 onwards
3. build 6 to 9 SSNs with land attack capability based on the French Barracuda class SSNs which are themselves a derivative of Scorpenes (some say land attack ability on conventional SSKs is not needed)

that way IN will have 4 different class of submarines by 2030 such and achieve/exceed the target of 30 subs decided sometime back with:-

these are completely my views, and everyone is free to disagree

I think the Indian MoD will only hurry up once Pakistan signs up for the 6 Chinese subs by the end of this year. Based on Chinese production rate you might see the PN induct the 6 new subs before IN inducts are it's six Scorpions.

Its so hard to believe it is all true. I mean the madness depicted here makes Alice In Wonderland seem like a tax report.

Is not having MoD running public sector compnany a conflict of interest ? A couple of years ago BSNL,was separated DoT for the same reason.

I was shocked to read that a government shipyard took apart a submarine and can't put it back together! Based on what I read here, the problem seems to be the MoD. But , this is not the first time, why isn't there any case registered against them yet? This is the worst form of negligence, if this is the private sector by now the officers in-charge would have been fired but over here, we don't even know the names of the MoD officers behind this fiasco. Can't parliament force the Civil Service Commission to institute a inquiry?

Err,
You have a picture of the pakistani Agosta Khalid up on this article

Yes, that's exactly what the photo caption says. The article is about the Scorpene not having torpedoes... which renders it vulnerable to submarines like the Khalid-class.