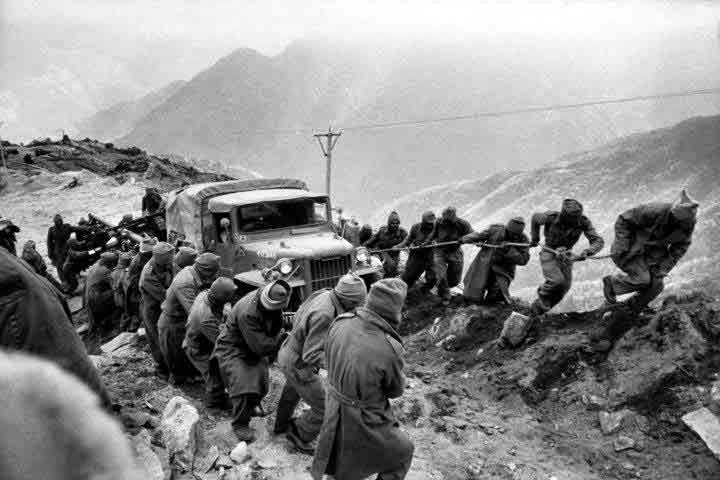 The recent internet posting of what Australian author and journalist, Neville Maxwell, claims to be the “top secret” Henderson Brooks Report --- the army’s long suppressed inquiry into the military defeat by China in 1962 --- has become an opportunity for many.

For Maxwell himself, it has --- unwittingly or by design --- created a swell of free publicity for a new edition of “India’s China War”, Maxwell’s controversial book, which has recently been re-published in India. Dismissed by some scholars as pro-China propaganda and acclaimed by others, Maxwell’s book is now squarely in the spotlight.

Meanwhile, the opposition Bharatiya Janata Party has seized the opportunity to attack the Congress Party. On the BJP website, senior party leader Arun Jaitley demands the entire Henderson Brooks report be released, and speculates whether some parts still remains secret “because these pages contain some material which can be embarrassing to those in power in 1962?”

Jaitley does not clarify why the BJP did not declassify and release the report whilst it governed India from 1998-2004.

Finally, the UPA government has cited “national security” to avoid comment. The defence ministry has termed the report “extremely sensitive” and claimed that its contents are of “current operational value”, echoing what Defence Minister Antony told parliament on April 19, 2010 to justify keeping the report secret.

For Lt Gen TB Henderson Brooks, identifying lessons from the 1962 debacle for the army and the country to benefit from was one of his key objectives after being appointed by army chief Gen JN Choudhuri on December 14, 1962, to probe into the operations.

Yet, even today, the absence of a measured discussion continues to ensure that important lessons from the run up to 1962 remain unlearnt.

The HBR weblog posted by Maxwell has two parts --- the second part listing out “detailed lessons” relating to training, equipment, physical fitness and the quality of command. These, says the HBR blogpost, are “largely in the tactical sphere and are meant for more general distribution (within the army).”

With a jittery political leadership sweeping the HBR under the carpet, those lessons never reached the army’s rank and file. The only two copies of the report in India remained locked in safes --- one in the army, the other in the MoD.

There are further lessons listed in the first part of the HBR blogpost, many of them as valid today as they were in 1962.

The HBR notes that the terrain in Ladakh will always militarily favour China over India (since Chinese troops can move quickly over the relatively flat Tibetan plateau). India, in contrast, can manoeuvre only near Chushul and in the Indus valley. The report notes, “Our roads, even when fully developed, will not have the capacity to sustain major operations… Accessibility to DAULAT BEG OLDI and HOT SPRING Sectors in the KARAKORAM Mountains will always be difficult.”

This observation rings startlingly true even today. When the Chinese army intruded into Daulat Beg Oldi last year, India’s reaction and troop movement was severely constrained since the road to that sector is incomplete even today.

China too faced difficulties in moving troops and supplies from mainland China to the Tibetan plateau, notes the HBR blogpost. “Once there, however, all Sectors are easily accessible from their side. Thus their capacity for manoeuvre is much greater than ours.”

China has certainly learnt its lessons, overcoming the challenge of accessing the Tibetan plateau. In 2006, the 1,956-kilometre Qinghai-Tibet railway was completed; which supplemented three road highways leading into Tibet from Qinghai, Chengdu and Xinjiang, which were built in the 1950s. Currently, work is under way on another railway line from Chengdu to Lhasa.

India’s difficulties in defending Ladakh in 1962, Henderson Brooks concluded, stemmed from the fact that we did not have a strong defensive line. The army tried to defend “cold war” outposts all along the border, established by troops that moved forward in accordance with the Forward Policy. Instead of that, says the HBR blogpost, “In LADAKH we should limit our commitments in war to the holding of LADAKH Range at the few focal points that give access to Leh.”

This military willingness to vacate large tracts of territory without a fight (ahead of the Ladakh Range), in order to give battle to China from tactically favourable terrain (like the Ladakh Range), contrasted starkly with the political leadership’s insistence on occupying and defending all the territory claimed by India.

On similar lines, the HBR blogpost terms a “fundamental error” the army’s decision to occupy a defence line on the Sela Ridge after withdrawing from Towang. Admitting that Sela --- a dominating natural obstacle just south of Towang --- was “a strong natural tactical position”, Henderson Brooks believes that Sela should have been ignored and the next stand made at Bomdila, even though that meant withdrawing 70 kilometres and leaving that territory to the Chinese. The HBR blogpost concludes that defeat “would have been averted had a clean break been made at TOWANG and the withdrawal to BOMDILA had been carried out as planned.”

There was, evidently, a major disconnect between a political leadership on the one hand that wanted every inch of Indian territory defended, even without the military and material resources to do so; and, on the other hand, an army steeped in the World War II experience of deep withdrawals and long advances, many of which were in other countries, without the emotional baggage of defending ones own territory. Like most generals of that time, Henderson Brooks appears unable to notice, far less bridge, this divide.
Posted by Broadsword at 07:58

If only Defence Chief's word alone has to be taken into account, then no war could be fought by India. In fact even in 1971 Indira Gandhi over rode General Manekshaw's objections and took Dacca against his advice. With import lobby having clout in Army,Navy,airforce circles, one can fight only with Americans latest weaponary.If Pakistan took us in Kargil, then again Musharaff found our Defenses vaunting with abandoned posts. Our training in all the three services lacks in quality and this has to be dinned into the ears of our ruling class.

JLN accelerated the state of war by saying we will throw the Chinese out!He added injury to the insult by stating the the Aksai Chin was like his bald head and not a blade of grass grows there!

Shuklaji,
A very well written & well analysed article. In this age of RTI it is of no meaning to suppress the facts mentioned in HBR. If it was fault from our's side also in 1962 it should be highlighted so that mistakes can be avoided & to guarantee that no repeat occurs in the future. The 1962 would have been easily avoided by the use of proper diplomatic means.