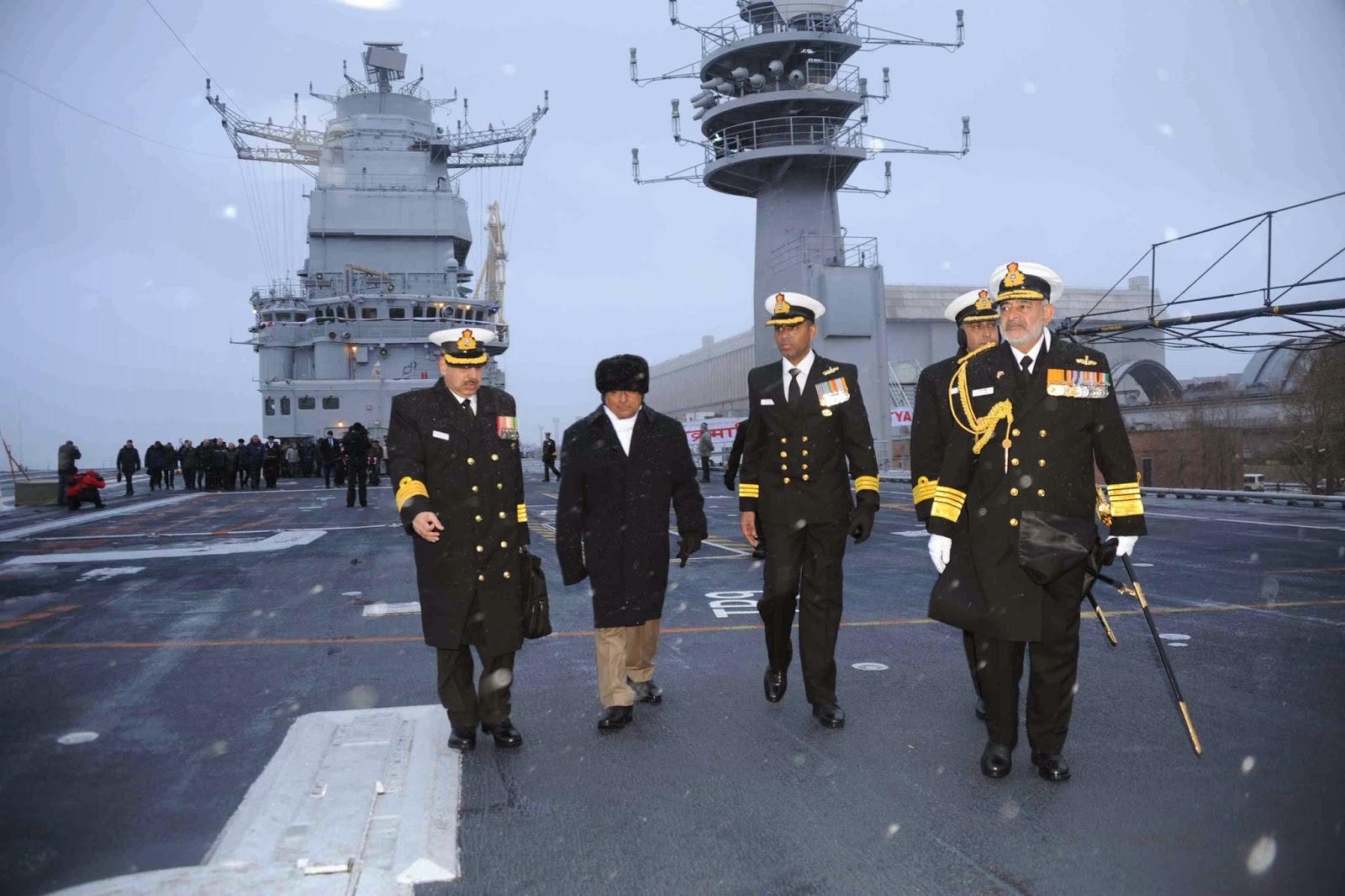 In an unprecedented public relations offensive, the ministry of defence (MoD) has issued a 26-page document that credits Defence Minister AK Antony for the achievements of the MoD; as well as the successes of the military, the Defence R&D Organisation (DRDO), and the Border Roads Organisation (BRO).

Entitled “Shri AK Antony as Defence Minister --- A Look Back”, the first accomplishment listed against his name is longevity, for having occupied his South Block corner office for seven and a half years after succeeding Mr Pranab Mukherjee in 2006. Antony is India’s longest-serving defence minister.

The release claims that the defence budget has grown by an average of 12.58 per cent annually under Antony, more than doubling since 2006. However, an analysis shows that, when inflation and the rupee’s erosion are factored in, modernisation expenditure has remained flat or even fallen.

There is statistical jugglery in the MoD’s claim that it utilised 102 per cent of the funds allocated for modernisation during 2006-2013. This claim is based on the revised estimates. Calculating on the budget allocation, the MoD has underspent a whopping Rs 27,213 crore during this period. This year, too, it surrendered an additional Rs 7,870 crore from the modernisation budget.

Yet there is silence on the most worrying gap in India’s maritime capability --- in sub-surface vessels. The Rs 18,798 crore contract for six Scorpene submarines, signed in 2006, is running 3-4 years late, with the first vessel now likely to be completed only in June 2015. Antony has not yet even tendered for the next six submarines, which are to be bought under Project 75I.

For the Indian Air Force (IAF), Antony is credited with buying a range of foreign aircraft --- the C-130J Super Hercules and C-17 Globemaster III transport aircraft; Russian-Israeli airborne control aircraft, or AWACS; the Pilatus PC-7 Mark II trainer; and Russian Mi-17V5 helicopters. The release claims that the purchase of 126 Rafale fighters is on track; as are the projects to co-develop with Russia a Fifth Generation Fighter Aircraft (FGFA), and a Multi-Role Transport Aircraft (MTA).

The release ignores the profligacy of these purchases, with the bulk of India’s modernisation budget now going on instalments for them. With little left for new purchases, the incoming government will have to sharply raise the defence budget to buy the Rafale, and other planned aircraft.

Antony is credited with “breaking India’s strategic planning out of the cocoon,” by raising a mountain strike corps (MSC) for the China border, which will give the army “decisive lightning reaction offensive capabilities.” The Rs 65,000 crore MSC followed the raising of two additional mountain infantry divisions, at a time when most of the world’s armies, including China’s, is cutting down numbers to boost technology and firepower.

The MoD release ignores the financial effect of raising the army’s numbers by almost 1,50,000 troops. With the army already spending two-third of its revenue budget on salaries, and the 7th Pay Commission having been constituted, these added numbers are a fiscal time bomb.

Meanwhile, the army’s most vital equipment shortages are ignored. No artillery has been purchased, even after five rounds of trials a decade ago. And with the MoD dithering for years over the contract for ultralight howitzers, BAE Systems has shut down its production line. This will mean more expensive guns whenever they are bought.

Mr Antony justifiably lays claim to galvanizing the creation of a coastal security network after the 26/11 Mumbai attacks. Even so, the project remains worrying incomplete.

Ironically, kudos are heaped on the Border Roads Organisation, which has managed to build a mere 12 out of the 73 roads sanctioned for the Himalayan border. The MoD’s upbeat claims entirely ignore the fact that construction is running years behind schedule. With the BRO riven by an internal factional struggle between its army and civilian cadres, has little hope of improvement.

There is substance in the MoD’s claim of having improved soldiers’ lives, through measures like including eggs and fruits in the ration scales of the jawan, which earlier only officers got. Mr Antony also fulfilled a long-standing demand in approving “one-rank-one-pension.” Even so, the goodwill from these measures cannot wash away the bitterness created by the MoD’s Department of Ex-Servicemen’s Welfare. The DESW has systematically stonewalled the payment of benefits to long-retired servicemen, even countering court orders by filing repeated appeals in higher courts. Since pensioners can ill afford to litigate, the MoD often wins by default. This has so alienated ex-servicemen that an upbeat press release, even listing some genuine accomplishments, is likely to arouse only cynicism.
Posted by Broadsword at 06:40

Mr. A.K Antony's work as the defence minister should be commended for his sincerity and commitment. Decades of neglect in the defence realm cannot be undone within a few years and his tenure over the last seven years has indeed raised the bar of the Indian defence forces.

Antony has been an excellent defense minister for India. Thank you, Defense Minister Antony.

It shows the extent to which this incompetent government would go to throw wool in the eyes of its citizens.The crying need of the hour for the country is to have dedicated leaders with single minded purpose to rectify years of neglect and decadence.A dictatorial streak and the ability to bulldoze right thinking ideas in such leadership would be welcome.

i happen 2 interview some BRO senior officials posted on himalayan borders.. who work hard to put everything into place .. but they say that the approvals take years and if they ask for 10 ..they are given 7 .... and the deduction has no justification...

Put Antony's performance in the context of other defense ministers and you will see that he has really achieved a lot. specifically on the indigenous front. I am pretty sure that there is some lobby waiting to get him out as fast as possible so that the normal import business as usual can start.

Dear Broadsword, AK Anthony has been an EXCELLENT defence minister. We cannot appreciate him enough for the yeoman service he has rendered. We are fervently praying that the UPA will return to power and that they will retain AK Anthony as defence minister. Sincerely, China & Pakistan.

Why dont we publicize the Defence ministry staff and PMO's staff ?

The first step to raise accountability is to bring forth and name and picture our MOD and PMO staff. After all when we the name and face of our senior military officers, why not publicize the "public officials" sitting in MOD.

The next time these officials are sitting on an important proposal or are just being babus, they can be named and pictured on live News TV.

We do it to our generals, to our politicians, why are we sparing media scrutiny to our "Public officials".

What kind of nation we are, where we know who the Number 1 submarine man is , who our DGMO is but dont no who are "secretaries" in soth block.

A K Antony's only crime is perhaps his longevity in office. Being at the helm of 7.5 years makes him an easy target for unfounded criticism. Had he made a pig's breakfast of the MoD and left in 2 years,he could have gotten away.

Using inflation and rupee erosion to attack the budget is silly. Do you believe the MoD is now responsible for India's monetary policy? Does inflation not apply to every budget of every ministry over these years?

Also,why not criticize the military leadership who decide India's future battle-readiness and firm up the weapons mix of her warriors? Did AK Antony decide how many squadrons of Rafale fighters are decided? Or did he constitute the new corps himself in his sleep? If so, did the dissenters show moral courage and resign in protest? No,and that's because the decisions you heap at AK Antony's door were the plans of the generals and air marshals.

The BRO comment is definitely fair criticism though.He should have rammed some skulls together there.