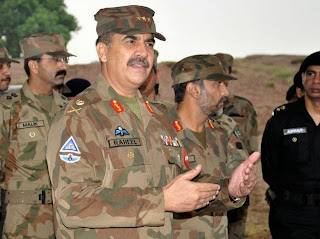 Jolting the defence establishment in Rawalpindi, Pakistan’s prime minister Nawaz Sharif has named Lieutenant General (Lt Gen) Raheel Sharif as Pakistan’s next army chief, say reliable defence sources in that country. Currently a three-star general, Raheel Sharif will be promoted to four-star rank tomorrow. On Friday he will take over as chief of army staff (COAS) from General Ashfaq Pervez Kayani, who has headed the Pakistan Army for six years since 2007, when he took over command from General Pervez Musharraf.

Simultaneously, Lt Gen Rashad Mehmood will be promoted and appointed chairman of the joint chiefs of staff committee (CJCSC). General Kayani is currently the CJCSC, in addition to his own job as COAS, since the retirement of General Khalid Shamim Wynne on October 8. The CJSCS performs a planning and coordination role that is significantly less powerful than that of the COAS, even though the CJSCS is a four-star general like the COAS.

In choosing his namesake, Prime Minister Nawaz Sharif has overruled the recommendations of General Kayani, who reportedly suggested that Lt Gen Rashad Mehmood be appointed army chief and Lt Gen Haroon Aslam be made CJCSC. In picking his own army chief against the advice of Gen Kayani, Mr Sharif has significantly asserted his authority over the military.

Although junior to other contenders, Lt Gen Sharif was a realistic contender because of his close relationship with the PM’s family. However, Nawaz Sharif has a poor record in choosing army chiefs. All four chiefs selected by him earlier eventually turned against him. Gen Asif Nawaz Janjua, who died in the saddle in 1983, had testy relations with Mr Sharif; after his death Janjua’s family alleged that “his enemies” had poisoned the chief. His next pick, Gen Abdul Waheed Kakar induced Mr Sharif to resign in 1993, along with the president with whom he was at loggerheads, Ghulam Ishaq Khan. In 1996, Gen Jehangir Karamat resigned in protest, the only Pakistani army chief ever to have done so. Mr Sharif’s fourth pick as chief, General Pervez Musharraf, evicted him in a coup in 1999, leading to a long exile in Saudi Arabia.

Mr Sharif’s latest appointee, Lt Gen Raheel Sharif, possesses all the credentials needed for the top job. Commissioned into in the Frontier Force Rifles, he commanded the Gujranwala-based 30 Corps in his current rank. His name was amongst the three offered by Gen Kayani to head the Inter Services Intelligence (ISI), along with that of Lt Gen Rashad Mehmood; eventually the third, Lt Gen Zahir-ul-Islam, was chosen. Earlier, while heading the Pakistan Military Academy (PMA) at Kakul, he shifted the emphasis of training from conventional warfare (i.e. against India) to asymmetric warfare (i.e. counter terrorism). Though Lt Gen Sharif was posted in Kakul before Osama bin Laden was discovered and killed in Abbottabad, at the PMA’s doorstep, the reconstructed account of Osama’s last years indicate that the Al Qaeda leader had indeed been his neighbour whilst at the academy.

Interestingly, Lt Gen Sharif is the younger brother of one of Pakistan military heroes, Major Shabbir Sharif, who was awarded the Nishan-e-Haidar (Pakistan’s version of the Param Vir Chakra) for gallantry in the 1971 war. Only ten Pakistanis have won this award so far.

The new CJCSC, Lt Gen Rashad Mehmood from the Baluch regiment, is a native Punjabi like Raheel Sharif. Currently serving as chief of general staff (CGS) --- the traditional springboard to the COAS office --- he was the front-runner. Besides commanding the prestigious 4 Corps, which is responsible for defending Lahore, Mehmood had galvanized the “C” Wing of the ISI, which conducts counter-terrorism operations against jihadi groups, some of them backed by the ISI itself.

General Ashfaq Pervez Kayani, the chain-smoking enigma who will depart after a six-year tenure as COAS (including a three-year extension granted in 2010), is currently about 8 years senior to his corps commanders and senior staff officers. While that gives Kayani complete control, Lt Gen Raheel Sharif would take some time to stamp his authority over other senior commanders who are also his contemporaries.

Gen Kayani had engineered an unprecedented course correction in Pakistan’s military doctrine, directing his army to combat a “multifaceted threat” from terrorists and separatists, rather than focusing only on India. Speaking at PMA Kakul on Aug 14, 2012, Gen Kayani declared that the war against terrorism was Pakistan’s war, not just that of the army.

Given the Pakistani Army’s internal safeguards that keep radical Islamists out of the top hierarchy, Raheel Sharif is likely to follow the same line. For an army that could soon be launching an offensive into North Waziristan, where it would face bloody fighting against the Tehrik-e-Taliban Pakistan (TTP), the change of leadership comes at a pivotal moment.
Posted by Broadsword at 17:17

Cavalry Cad must be cartwheelin' after all raheel is from the infantry therefore obviously incompetent and so our flamboyant cavalry will bounce, blast and trample him with ch0ta hazri in Lahore and breakfast(sole n kippers only) at Dera Ghazi Khan before reaching Peshwar for the burra peg (single malt , of course)!!
Mudblood

Interesting read but I am not sure it makes a lot of difference to us as Indians. Pakistan or for that matter India is yet to produce a COAS who will dare to take on the establishment's entrenched positions. I suppose it is quite natural given that one becomes the top dog to represent the establishment's interests; wild ducks are culled quite early in their careers

Lt Gen Raheel Sharif in not a Punjabi!
He is ethnically a Kashmiri. Northern Punjab and Lahore are full of Kashmiri and they consider themselves Kashmiri not Punjabi!

Some of the reports are suggesting that he was the recommended choice of kayani. One of the reasons being, that he has been one of the brains behind the new shift in PA thinking wrt cold start, COIN/CT.

This has resulted in major overhaul of PA training. The implementation of the doctrine as you well know takes time and generally gets well diluted especially when it comes from training/education department. The operational people don't take these guys too seriously!!!

Now the operational guys will have no choice! I think Nawaz Shraif finally made a wise decision.

Do not put too many hopes on this new Pakistani COAS.

They all are schooled in anti-Indianism, the day they enter primary school.

A very canny choice by the Pak PM.
Lt Gen Haroon was a non-starter given his role in the 1999 coup.Choosing Lt Gen Rashad would have meant continuing with someone in the Kayani mould so a kick up and sideways to CJCSC was called for as otherwise superseeding him also might have seen a lot of heartburn in the officer corps.
Then look at the manner it was done. The PM kept the world on edge for a month whilst the press frenetically debated options on the 2 senior most generals and an outside possibility of the CNS becoming CJCSC.
No one even talked about Lt Gen Raheel - he was considered to be in the doghouse with Gen Kayani who had dumped him in our equivalent of the ARTRAC.
Lt Gen Raheel's mindset must have been contemplating life after the army when he got the call to meet the PM and hear the words " kyo mian Chief banoge?" ( with apologies to the Raja of Dungarpur).
The PM being a canny politician must have laid out his conditions to Lt Gen Raheel (u run the army and let me decide foreign and internal policy )- how many rank outsiders would have said no ?
Gen Raheel will now have his work cut out to balance the army hardliners, like Lt Gen Tariq Khan on one hand and the PM on the other.It wont be easy but most likely one thing is clear -the days of GHQ being the supreme policy clearing house are probably over.