India balances military exercises with US and China 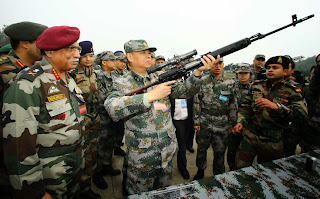 Today, in an almost too careful gesture of even-handedness, the Indian Navy began a seven-day joint naval exercise with the US navy off Visakhapatnam, even as the Indian Army kicked off ten days of joint training with the People’s Liberation Army (PLA) near Chengdu.

Interestingly, the ministry of defence (MoD) has taken pains to reduce the profile of the Indo-US Exercise Malabar. This is evident from the number and type of warships participating. Instead of the customary aircraft carrier battle group, the US has fielded a solitary Arleigh Burke class guided-missile destroyer, USS McCampbell, and a few P3C aircraft. India is fielding just two warships, INS Shivalik and Ranvijay, and some TU-142M maritime reconnaissance aircraft.

This is a marked reduction from last year, when a US carrier battle group took part in Malabar 2012, with the aircraft carrier USS Carl Vinson escorted by three other vessels. The Indian participation included five major surface warships.

Exercise Malabar 2007, the highest profile ever; saw Australian, Japanese, Singaporean and American flotillas train with the Indian Navy off the Andaman & Nicobar Islands. China shot off a written questionnaire, while India’s Left Front parties, indignant at what they considered an anti-China gesture, staged political demonstrations along the east coast against the warships exercising 800 kilometres away. That year, 13 major US warships had participated, including two aircraft carriers --- USS Nimitz and USS Kitty Hawk.

That Defence Minister AK Antony has taken note of Beijing’s feelings was made clear in April, when India clumsily withdrew from a trilateral exercise planned with the US and Japanese navies off the coast of Guam. When American and Japanese officials arrived in Delhi for a coordinating conference, they were taken aback to be told that New Delhi would not participate.

New Delhi and Washington both cite budgetary cutbacks to explain the reduced profile of joint exercises. The declining US defence budget, compounded by the effects of sequestration (mandatory spending cuts), has in fact played a role, for example in the Pentagon’s cancellation of the Red Flag Exercise in Arizona earlier this year. But there is also growing conviction in Washington that New Delhi is toning down the US relationship, apparently to placate China.

Compounding these feelings is the MoD’s apparent inconsideration. Earlier this summer, a US two-star general arrived in Delhi for a scheduled meeting with a MoD official. When he arrived at South Block, he was told that his interlocutor had gone to Italy in connection with the AgustaWestland AW-101 VVIP helicopter investigation.

Notwithstanding this, the MoD exudes optimism about US-India defence ties. “Our navies are natural partners, and we look forward to continuing to strengthen the bonds and personnel relations between our navies”, observed the MoD today.

Yet US defence expert and Pentagon watcher, Manohar Thaygaraj says there is cause for worry. “The number and scope of joint exercises, which is usually cited as one of the strengths of the US India defence relationship, has been steadily declining, partly for budgetary reasons, partly for political ones,” he says.

Meanwhile, 160 Indian soldiers, who travelled to Chengdu, China, started “counter-terrorism training” today with the People’s Liberation Army (PLA). The first exercise of this series, Hand-in-Hand, was held in Kunming in 2007, followed by a second in Belgaum the next year. In 2010, New Delhi suspended defence exchanges after China denied a visa to India’s top military commander in J&K. In July, during Mr Antony’s visit to Beijing, it was decided to resume the series.

Since Nov 2003, India has also carried out joint naval exercises with China, although these are far less sophisticated and operationally oriented than the Malabar series with the US, the Konkan series with the UK and the Varuna series with France.
Posted by Broadsword at 06:17

Yes, there should be more such exercises in the (future) enemy's land....same as was done by Germany prior to WWII when they got themselves trained in the vast open spaces of the then Soviet Union and later on took advantage of the knowledge gained to inflict an almost crushing defeat on the Soviet forces.

Thanks for this Ajai Sir. Nice, as always :-)