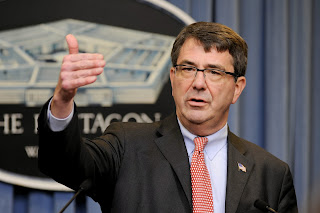 In a setback to the evolving US-India defence relationship, US Deputy Secretary of Defence, Ashton Carter, has announced that he will retire on Dec 4. Since the beginning of this year, when President Obama appointed Chuck Hagel to succeed Leon Panetta as Secretary of Defence, Washington has buzzed with rumours about Carter’s dissatisfaction at not being promoted to the post.

Since Jun 2012, Carter has almost single-handedly pushed US-India defence ties through the Defence Trade and Technology Initiative (DTI), which he co-chairs with India’s National Security Advisor (NSA) Shivshankar Menon. The DTI aims to smoothen the flow of high technology by unlocking US regulatory hurdles to the export of sensitive technologies to India.

With Defence Minister AK Antony disinclined to deepen ties with Washington, Menon encountered severe limitations on what he could do. Carter, however, continued to push the relationship, bulldozing the Washington bureaucracy into moderating its hands-off attitude to India.

As Business Standard first reported, Ashton Carter proposed that US and Indian industry join hands in co-manufacturing a range of defence systems, including the Sikorsky/Lockheed Martin MH-60 Romeo multi-role helicopter; the Raytheon/Lockheed Martin Javelin missile; a scatterable mine system; and the Mk-45 127 millimetre rapid-fire naval gun.

When that evoked no response from New Delhi, Ashton Carter upped the ante, proposing that the two countries cooperate to design and develop the next generation version of the Javelin, already the world’s premier anti-tank missile. The DRDO is understood to be studying this unprecedented proposal.

In contrast to the over-cautious and technically ill-equipped bureaucrats in New Delhi, Carter brought serious accomplishment to the table. He holds a Ph.D. in physics from Oxford, and has long experience in the Pentagon, including almost a decade of service on the Defence Science Board.

Endorsing Carter’s ability, Chuck Hagel said in a written statement last night: “(Carter) possesses an unparalleled knowledge of every facet of America’s defense enterprise, having worked directly and indirectly for eleven Secretaries of Defense over the course of his storied career.”

Carter’s last visit to India was on Sep 17-18, when he advocated a “new and much deeper form of partnership”, with R&D talking place cooperatively between the two countries.

India remains steadfast in refusing to sign what Washington terms the “foundational agreements” for a partnership --- the Communications Interoperability and Security Memorandum of Agreement (CISMOA); and Logistics Support Agreement (LSA). But Carter declared last month that the two countries “have decided to work around that.”

There is speculation about Carter’s successor. “The Obama administration is concentrating power in the White House, so somebody with strong political links would probably succeed Carter. The last time around, Michele Flournoy was one of the contenders. She could be considered again,” said a Pentagon watcher.
Posted by Broadsword at 11:57

"In contrast to the over-cautious and technically ill-equipped bureaucrats in New Delhi, Carter brought serious accomplishment to the table. He holds a Ph.D. in physics from Oxford, and has long experience in the Pentagon, including almost a decade of service on the Defence Science Board."

This sums up the problems faced in India, not just in defence ssector, but everywhere...

I did not think India would go for the deal proposed by Carter, but Carter's resignation will make the proposed deal (working together with USA on developing javelin, etc.) even less likely.