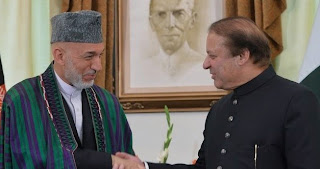 With the Afghan government in Kabul approaching Islamabad for help in opening “reconciliation” talks with the Taliban, a Pakistani role in shaping the political landscape in Afghanistan is now an uncomfortable likelihood for New Delhi.

Prime Minister Sharif, who declared that he wants a “peaceful, stable and united” Afghanistan, did not hesitate in accepting this opening.

"I assured President Karzai that Pakistan will continue to extend all possible facilitation to the international community's efforts for the realisation of this noble goal," said Sharif, in comments made live on Pakistani television after meeting with Karzai.

"In what observers and officials regard as an indication that the two leaders have found common ground, the Afghan president --- who was to return to Kabul on Monday --- has extended his stay in Pakistan in order to continue talks on Tuesday."

New Delhi, which enjoys enormous political leverage with Mr Karzai, has tried to convince the Afghan president not to approach Islamabad as a conduit to the Taliban. But, with the Pakistan-based insurgent group spurning Kabul’s direct overtures, and dismissing Mr Karzai as an American puppet, Pakistan has landed the role of middleman.

Speaking at a closed-door seminar in New Delhi on Friday, Indian Foreign Minister Salman Khurshid had repeatedly expressed regret that Kabul was talking to the Taliban. “Certain elements in (the reconciliation) process are not very comforting to us,” said Mr Khurshid

“We are not sanguine about some of the armed groups that Afghanistan is talking to, but that is for Afghanistan to decide,” he repeated.

It remains unclear who exactly Islamabad would bring to the dialogue table. Kabul has repeatedly asked Pakistan to release all Afghan prisoners from Pakistani jails, especially Mullah Abdul Ghani Baradar, a key deputy of Mullah Omar. Pakistan arrested and jailed Mullah Baradar in 2010, reportedly after the Taliban leader initiated a direct dialogue track with Kabul.

In June, Pakistan claims it brought more than two dozen Taliban representatives to Qatar, for opening a political office. That initiative quickly collapsed, with Mr Karzai furious that the Taliban had adopted the trappings of a government in exile.

Today’s Pakistan trip is a climb down for Mr Karzai, who has repeatedly accused Islamabad of blocking the Taliban from talking to the Afghan High Peace Council (HPC), the body set up by Kabul to pursue reconciliation between Afghan factions, especially the Taliban.

New Delhi intends to keep a sharp watch on Kabul’s talks with the Taliban. “We will study the solutions that Kabul evolves, and we will be grateful for being informed. But the solution has to be what Kabul wants, what it is comfortable with and which it must find for itself,” said Mr Khurshid.

Next year, Afghanistan is scheduled to undergo a dual transition. Mr Karzai, having served two terms as president, must hand over to a successor, for which countrywide elections are due. Also, 80,000 troops of the International Security Assistance Force (ISAF), which has underpinned security for over a decade, are due to be pulled out. Left in Afghanistan will be is a residual US presence, which remains to be negotiated between Washington and Kabul.
Posted by Broadsword at 06:52

Asking Nawaz sharif to mediate is meaningless. Nawaz Sharif is a clown peddling platitudes while the military-intelligence cabal let him play "Prime Minister". Unless and until the Generals in Pakistan feel confident, the Taliban will not engage anybody in any kind of talks. Futther, as they have already demonstrated the Taliban only see these or any such "talks" as a means to gain legitimacy. They will only play nice as long as it serves their purposes and as soon as the ISAF leaves - the Taliban will be gunning for Karzai - "peace deal" or no "peace deal". Further negotiating with one or two Taliban factions doesn't imply no more attacks against the ISAF or the Afghan forces - not every group is keen to follow the Paki lead nor play diplomat.

So let me get this right. The indians want the process to be driven by Kabul aka afghan led. Then why are they worried that Kabul goes to islamabad? Surely afghans can decide to involve whoever they want.

Karzi's main problem is that he has no power base. Even in Kabul! Pakistanis have made their conditions clear, both to USA and afghanistan, you involve india in anything that impacts them, you are a no no. USA have realised and adapted. Pakistanis and Taliban are not thinking 5 years ahead but 2+ generations.

India's is liked in afghanistan but not respected or feared! Pakistan is respected by the fact they stood upto a superpower and sided with the taliban. In pak/afghan culture this is considered a debt of honour and not something that you forget. Feared because what they have done and can do in future. Its cultural you see.

Reminds me of the tweet I received the other day.

For those English readers, here is an epic video portraying modern India's reality.