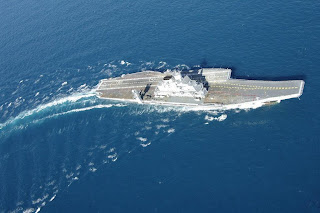 The aircraft carrier INS Vikramaditya, formerly the Admiral Gorshkov, which is expected to join the Indian Navy later this year, is already late by 5 years and its price has risen three-fold from $947 million in 2004 to $2.3 billion today. It now emerges that for the next 3 years or so, INS Vikramaditya will function without effective defences against anti-ship missiles --- a key threat to warships today.

For this the Russians are not to blame --- the Israelis are. The futuristic missile defence system that was supposed to be fitted on the Vikramaditya, called the Long Range Surface to Air Missile (LR-SAM), is also late by at least 3 years. The LR-SAM is a missile, fired from a warship to shoot down an incoming anti-ship missiles at ranges out to 70 kilometres. Israel Aerospace Industries (IAI) is developing the LR-SAM in partnership with the Defence R&D Organisation (DRDO).

On Thursday, Vice Chief of Naval Staff, Admiral RK Dhowan, said in New Delhi that the Vikramaditya would arrive without a “close in weapons system” (CIWS, pronounced sea-whiz), a ship-borne system to destroy incoming missiles and aircraft. The navy will fit an AK-630 rapid-fire gun system on the Vikramaditya when it arrives, but the more potent LR-SAM will only be fitted during the aircraft carrier’s first refit. That would be at least three years down the line.

Given these continuing delays, the navy’s ageing INS Virat --- already half a century old --- will continue in service till 2018. The INS Vikrant, the aircraft carrier that is being built in Cochin Shipyard Ltd, is being launched on Aug 12, but will only enter operational service by end-2018, says Dhowan.

The LR-SAM was to be ready by 2011 for equipping three Indian destroyers that Mazagon Dock Ltd is building in Mumbai under the so-called Project 15A. The LR-SAM delay has held up Project 15A, with INS Kolkata, the first warship in this series, having floating in the docks for the last seven years. INS Chennai and INS Kochi, the other two destroyers in Project 15A are delayed too.

But there is light at the end of this tunnel. Business Standard has learnt that a DRDO team is heading for Israel for the first “hot test” of the LR-SAM this month. This will check out all the missile systems --- detection, propulsion, guidance, command and control --- functioning in tandem. While the radar, control and navigation systems were tested last year, this will be the first test of the entire system functioning together.

Says DRDO chief, Dr Avinash Chander, “The crucial part of the test will be the missile’s ability to perform manoeuvres. After this full-configuration test, we will carry out trials next year from a ship.”

“There are always uncertainties when one is developing a system of a technology class that exists nowhere in the world.”

In exclusive briefings at the DRDO’s missile cluster in Hyderabad, Business Standard was told that the Israeli company is developing the front section of the LR-SAM, including the seeker head that guides the missile, the front controller, command electronics, and the explosive warhead that destroys the target.

The DRDO has developed the rear section, including the two-pulse rocket motor, the rear controller, the thrust vector control and the folded fins. DRDO scientists and designers have also participated in the Israeli part of the development.

The LR-SAM is made especially deadly by its two-pulse rocket motor. The first pulse propels the missile towards the incoming target; while a ship-borne radar tracks the enemy missile continuously, transmitting course corrections to the LR-SAM. When the LR-SAM is near the target, its seeker locks onto the target, taking on the job of guidance. Simultaneously, the rocket motor fires its second pulse, imparting to the LR-SAM a high velocity that leaves the target with little time to manoeuvre. The LR-SAM has both front and rear steering, which allows it to manoeuvre sharply, remaining locked onto even a twisting and turning target.

Once tested and proven, many LR-SAM components will be built in India. The DRDO says it has developed suppliers within Indian industry, with two vendors developed for each sub-system. For example, Godrej and SEC, a company in Hyderabad, will build the two-pulse rocket motor.

A ground-based version of the LR-SAM is simultaneously being developed for the Indian Air Force (IAF), which is desperately short of air defence systems.
Posted by Broadsword at 09:53

As long as the Aircraft Carrier rests in the carrier battle group, there is very little need for it having self defence capabilities.

Ajai,Good Article but can you please tell that if BARAK-8 will not be ready for another 3 years as it is still under Testing Phase then how come Israeli Navy has started equipping its SAAR class missile boats with BARAK-8 Missiles system ?

Never mind the Press TV Source , the same report came in "The Times of Israel " too...

Moral of the Story : Never, ever deal with the Russians.

Russia has cheated us on more than one occasion: be it spares for MiGs, no tech-transfer for T-90s, and swindling us on a second-hand Gorshkov.

Instead of investing any more billions on Russia, lets use the same money to spur our indigenous industry instead !

Why pay mother Russia, when Bharat Mata's kids can do the same job - and better ?

One also wonders why the Times of India, Hindustan Times and The Indian Express never publish such reports with the same frequency and malice that they report on DRDO's "delayed" projects.

You're probably the only journalist, who has the guts to take on the armed forces -- and hit where it hurts them the most.

Ajai Sahib, Any information on if the carrier battle groups ships are ready or are they still forming as well?

Well of my openion USA needs nuclear power CBG TO cross the antartic or pacific, we dont need to go or travel such long distances, different with subs az they are silent killers, I think we need more nuke propelled subs, possibly 10

I doubt that having dedicated LR SAM defense is necessary for an aircraft carrier, considering it will be a part of CBG with dedicated anti-air umbrella.
Why even bother.

Ajai: would it be possible for you to find answers to a couple of questions:

a) Is Barak-8 different from LRSAM? If so, how? Is the only difference that Barak-8 is 100% Israeli, while LRSAM has DRDO components? Or are there any performance differences?

b)The answer to the above might hopefully answer why Israel is already in the process of outfitting its missile boats with Barak-8, while LRSAM is still a couple of years away

Many thanks in advance

What Umbrella are we talking about here? The Same LRSAM, is going to be used by the other ships on escort, without it, their potency against carrier killer / disabler missiles is still questionable. Unless we have some other missile that is at par with the LRSAM for the missile defence role, in which case why even bother with the LRSAM.

I think india shold have bought russian air defence, how do chinese get rusdian tech, and we russian goods, russia would sell weapons to anyone, they do defence for business,
Our indian engineers and scientists are cool but our defence forces need to accept our stuff.
Arjun tank / 248 (2 versions)
Nag
Tejas 40 (mk1)
Artillery guns/ 150 pieces joke
Arjun is far better than T90, nag needs to be inducted and improved,
Stalin once said quality is qualitu but quantity has a quality of its own, 126 rafales could buy 350 tejas, but HAL SHOULD NOT take 30 years to delivet.

tdblog@yahoo.com:
No country in the world is willing to sell India a aircraft carrier. SO the following:
1. Out of choice customers like India in the case of Air craft carriers have only to thank there stars that this one is finally coming to India,
2. With Russia China friendship growing to the next level, we are only thankful that Russia hasn't planned shelving the project and are still delivering the ship, even if it is mediocre than what was aimed for,
3. If we are so keen on missile defence system, pls spend money on it and buy it from Israel, they will deliver it far more quickly than the russians. Americans do not even have an interest in sharing such arms to India.

Biased again...your statement already late by 5 years and 3 more to go for missile defence system, is only there cause it is a Russian delivery...had it been US delivery...same would have been decorated like a 5 star general and published on your blog.
Nothing wrong in being US friendly, but not at the cost of our Country's national security. Russia offers far more technological depth than US in any product...US is not even interested in co developing a single product.
Rest I leave on your prudence on how you would like to highlight your views.

I doubt that having dedicated LR SAM defense is necessary for an aircraft carrier, considering it will be a part of CBG with dedicated anti-air umbrella.
Gold für WOW

CVBG will have sufficient air cover. May perhaps install the Barak-1 / AK-630 or the Kashtan CIWS system in the interim. IIRC there were 8 Kashtans in the original setup.