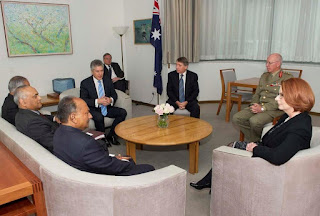 In Canberra today, on the second leg of his three-nation tour to Singapore, Australia and Thailand, Defence Minister AK Antony and his Australian counterpart, Stephen Smith broadly agreed to enhance defence relations between their countries.

In considering Australia’s increasingly fervent requests for a closer defence relationship, Antony walked a fine balance. On the one hand there is growing expectation across the Asia-Pacific for India to play the balancer in a region that worries deeply about a rising China. On the other hand, New Delhi is reluctant to be an instrument for containing China.

The joint statement from Canberra today is coloured more by Antony’s native caution than by Australia’s new ardour. He agreed to send Indian Navy warships to the International Fleet Review at Sydney in October. Existing mechanisms of engagement like defence ministers’ meetings, policy dialogues and officer exchanges would all continue. But Canberra’s key request for bilateral military exercises was conceded only half-heartedly.

The joint statement said that the two sides would “work towards a bilateral maritime exercise in 2015.”

Senior Australian diplomats had told Business Standard before the visit that Canberra wanted a “framework developed for more bilateral maritime exercises.” Australia had also asked for a bilateral air force exercise, pointing out that the two air forces flew common aircraft --- notably C-130J Super Hercules and the C-17 Globemaster III --- and that this would benefit interoperability.

Multilateral exercises have a mixed history in the India-Australia context. In 2007, the US, India, Japan and Australia proposed a “quadrilateral exercise” involving the Asia-Pacific democracies. Australia’s prime minister at that time, Kevin Rudd, backed off for fear of offending China.

After Australia, Antony will visit Thailand, another potentially vital southeast Asian country that the Indian prime minister visited just a week ago. Before that, the prime minister made a high profile, three-day visit to Japan that India’s foreign secretary termed “extremely successful.”

This sequential bilateral diplomacy with China’s neighbours is accompanied by a careful effort not to bait China in multilateral forums. Antony pointedly avoided attending the Shangri La Dialogue in Singapore that was held from May 31 to Jun 02, a forum at which China is frequently in the dock. According to South Block mandarins, China is best engaged one-to-one, rather than multilaterally.

An Indian diplomat says, “Sensitive issues are best discussed with China face-to-face, rather than through public exchanges in a regional talk shop.”
Posted by Broadsword at 06:43