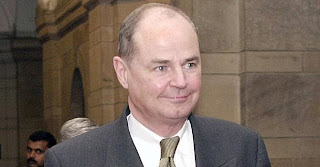 “Pakistan playing a positive role, hope this will continue”

Both Afghanistan and India have criticized the US-Taliban dialogue. On Jun 19, Karzai lashed out at the US after the Taliban inaugurated its new political office in Qatar with a plaque saying “Islamic Emirate of Afghanistan”, and the white flag and national anthem of the former Taliban government.

Dobbins is learnt to have told Lambah and Mathai that the Taliban violated the conditions of the talks by invoking the symbology of the former Taliban state. He claims that the US objected even before Karzai did, and the Qatar government quickly removed the offending flags and plaques.

According to Dobbins, the conditions accepted by the Taliban for opening the office in Qatar --- viz. no propaganda; no fund-raising; only political activities --- were specified in a diplomatic note that had been carefully negotiated over the preceding year and a half.

The dialogue, says Dobbins, is in limbo. With the Taliban representatives in Qatar viewing these restrictions as a setback for their image, they have referred back to the Taliban leadership about whether to continue talks.

Speaking to Business Standard, Dobbins said: “Having over-reached during the opening of the office, the Taliban have suffered a setback. Will they continue the dialogue? We don’t know, but we are not placing any early deadlines. Let them decide. There is clearly some debate within the Taliban between hard liners and those who are inclined to negotiate. Some at least realize that, despite whatever happens on the battlefield, things have changed too much in Afghanistan for there to be any return to the 2001 situation. And the Taliban would hope to gain legitimacy through negotiations with the United States.”

Asked whether there is certainty that genuine Taliban representatives have arrived for the talks in Qatar, Dobbins says: “The Taliban negotiators in Qatar include almost all the members of the Political Commission of the Taliban. And they clearly take orders from the Leadership Council, the next higher level. The fact that the representatives in Doha are hanging back suggests that they are awaiting orders from the Taliban leadership.”

Dobbins is learnt to believe that the Haqqani Network is also backing the Qatar dialogue. But Hizb-e-Islami chieftain, Gulbuddin Hekmatyar, has renounced the dialogue, apparently relying on separate negotiations that might yield him greater benefits.

Braving New Delhi’s scepticism, Dobbins is appreciative of Islamabad’s role in the dialogue. “We have good evidence that Pakistan is being helpful. Pakistan has certainly contributed to the Taliban’s decision to come to the table. We do not know if this cooperation will endure, but we hope so,” he says.

Asked why the Taliban --- for which freeing Afghanistan of “foreign occupation” is a fundamental tenet --- would talk in earnest with a “foreign occupier” that is simultaneously negotiating a Strategic Partnership Agreement with the Karzai government for a residual American presence after 2014, Dobbins says: “The Taliban has made contradictory public statements about a residual US force after 2014. First a Taliban representative recently said that they could accept a residual US presence; then another statement said that this would not be acceptable.”

On whether the Taliban could be entering dialogue in order to get NATO forces to reduce their tempo of operations, the US Special Representative points out, “The Taliban is clearly not intending to bring down the tempo of NATO operations because it is itself ramping up operations, as we saw from this week’s attack on the US Embassy in Kabul. We believe that the Taliban would like to see the US leave Afghanistan in defeat, not in victory, so they will step up violence and try to disrupt the elections. We are conducting our own military operations based on that assumption.”
Posted by Broadsword at 08:30

US policy on the Afghan exit: "Return of the weasels". These policymakers have no sense, no vision, just a cynical short-term view of how they can best Cover their you know what's as they high-tail it to the safety of the Appalachians. I am so glad that India has the spine to stand up to this stupidity. Dobbinses will come and go, India is permanently a part of the South Asian neighbourhood and has to figure out how to deal with the Haqqanis, the Taliban, the whole darned lot.