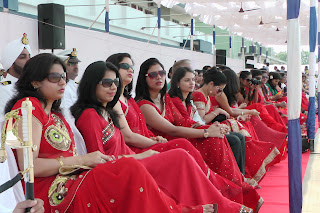 Wives of Indian Naval Air Squadron 303, in uniform for the inauguration of the MiG-29K squadron

Since 1910, when a barnstorming aviator first took off from a warship deck, naval fighter pilots have considered themselves a special breed. But few yearned to fly as much as Leading Aircraft Ordnance Mechanic (LAOM) Ajit Singh Gill, an enlisted Indian Navy sailor who eventually fulfilled his ambition by stealing a Seahawk fighter from the Meenambakkam base in 1964.

Only officers can fly fighters, but Gill was never selected, not even for an Emergency Commission after the 1962 war. So he learned to fly a tiny single-engine aircraft in the Delhi Flying Club and built aeromodels in his leisure time. On base, he volunteered for duty helping naval pilots strap into their Seahawk fighters, during which he asked casual questions about how to fly them. One Sunday, alone on guard duty, Gill clambered into a Seahawk, fired the starting cartridge and --- using all the information he had gathered --- roared off the runway into the sky.

At about the same time that the off-duty fighter pilots and the Meenambakkam control tower realized that an aircraft had been stolen, Gill realized he had no idea how to land the high-speed fighter.  Wisely choosing to land on water where he wouldn’t catch fire, Gill touched down just off Tiruvanmiyur beach. Since he did not know how to close the canopy, the unconscious Gill floated to the service where his opened hair was spotted by the frantic fishermen who had just had a fighter jet land amidst their boats.

Gill was court-martialled, to the regret of many naval fliers. Says Admiral Vinod Pasricha, himself a veteran carrier pilot, "I think Ajit would have made an excellent fighter pilot. He had all the right ingredients - courage, determination, capability, enthusiasm and perhaps the little madness associated with all of us."

Admiral Pasricha and other senior members of the navy's fighter pilot fraternity were at the inauguration of the first MiG-29K squadron, which was timed for the Diamond Jubilee of Indian naval aviation. Present in Goa on Saturday were three naval aviators who went on to become naval chiefs: Admiral Tahiliani, Arun Prakash and Sureesh Mehta.

It is the tradition of aircraft carrier operations that gives the Indian Navy a distinct edge on Sunday over its Chinese counterpart, the People's Liberation Army (Navy), or PLA(N). In contrast to India's long tradition of carrier deck operations, the PLA(N) has only now commissioned its first aircraft carrier, the Liaoning.

"It's going to be a long, hard learning experience for the PLA(N) because aircraft carrier operations are amongst the most complex military operations that one can think of. There are thousands of things that must work in unison whilst launching aircraft from a ship and nobody is going to tell the Chinese how to do those," explains Admiral Sureesh Mehta.

Adding colour to the occasion were 25 wives of the officers of the Mig-29K squadron, all dressed near identically in flaming red. "For us, this is like getting married," explained one.

The spirit of naval aviation seems alive and well, 60 years on.

I must say govt. has atleast taken 1 sensible & wise decision by maintaining a aircraft carrier in its force. Aircraft carriers r game changers in any type of war & last word in power projection. Even if our current Virat is old with just 11 harriers it has been refurbished & overhauled several times to maintain experience in handling carriers. Now britain will face difficulty as they have retired all their carriers & experienced pilots & personnels may not be available when Queen elizabeth class gets inducted. Surely chinese will also face difficulties initially as experience cannot be reverse engineered or copied from others.

Admiral Suresh Mehta would do well to not underestimate the Chinese. One shouldn't forget that their economy is the second largest in the world and is predicted to overtake the US in a couple of decades. They have the resources and do not lack in tenacity and ambition as proven by their success in space which mightily dwarfs all of India's efforts to date. Nevertheless, I would bet Indian fighter pilots are Top Gun over the PLAAF.

All "Pre-Owned" aircraft carriers have an unenviable history. They spend more time on the docks than in the sea! May it be Vikrant, Virat or even Vikramaditya. The story is the same.

There are many proverbs that can be cited to describe the situation. "Penny wise pound foolish" and "Mahenga roye ek bar, sasta roye bar bar".

To this I would add the ignominy of “Uttaran”. Using someone elses item to show off may not be a good idea.

Ajai, Being an ex-serviceman what is your take on internal mental health of Indian Naval Officers.

This is second time in less than 2 months that these news are doing rounds.

What are the Cavalry Cad's thoughts ? Well its also an old cavalry tradition so.....

The capabilities of INS Viraat are overstated and in my opinion, no body in the maritime world including Pakistan and China take her seriously. Viraat has been masquerading as an aircraft carrier for the past ten years if not more. Some one should ask a simple question as to how many deck landings and take offs have taken place from Viraat over the past ten years and the picture will be clear. And of course 'Night operations" would probably draw a blank. What I am getting at is that with the Gorshkov, we are actually starting from scratch and based on my own experience in induction of ships and technology, we will need at least 7 to 10 years to imbibe and start effectively exploiting the technology...