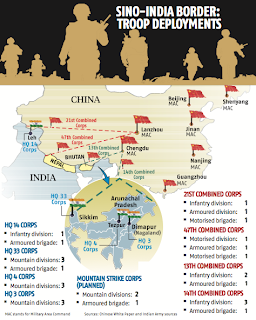 As the army’s Military Intelligence (MI) and Military Operations (MO) Directorates study the Chinese troop incursion into Indian territory at Daulat Beg Oldi, below the towering Karakoram Pass in Ladakh, military analysts are also scanning a newly-released Chinese document for information that might be of help.

Issued on Apr 16 by the State Council Information Office, the defence White Paper entitled "The Diversified Employment of China's Armed Forces" (hereafter “China’s Armed Forces”) provides an unusually clear look into the structures and missions of the People’s Liberation Army (PLA). The PLA includes China’s ground, air and naval forces, and the Second Artillery Corps that operates the country’s strategic arsenal of ballistic and cruise missiles, including those that carry nuclear payloads.

The document “China’s Armed Forces” has surprised Indian analysts by revealing that the PLA land forces (long regarded as the largest standing army in the world) are actually just half the size that intelligence agencies worldwide had estimated. India has always estimated that the PLA Army (PLAA) numbers 16 lakh soldiers; but the White Paper says the PLAA is just 8.5 lakh strong.

If the White Paper’s figures are authentic the Indian Army, with 12 lakh soldiers, is 50 per cent larger than the PLAA.

The PLAA’s numbers do not include the People's Armed Police Force (PAPF) and the militia, both of which operate behind the frontlines. The Indian Army too gets assistance from central police organization (CPOs) like the Indo-Tibet Border Police (ITBP), the Border Security Force (BSF) and the Sashastra Seema Bal (SSB).

According to the White Paper, 4 lakh airmen man the PLA Air Force (PLAAF), while the PLA Navy (PLAN) has 2.35 lakh sailors.

Indian military planners who prepare for eventualities like the current PLA incursion spiraling out of control, perhaps even into actual fighting, focus less on total numbers than on the units and formations that can quickly come into action. The White Paper fully corroborates the army’s estimates of Chinese formations on the Sino-Indian border.

Between them, these four Chinese combined corps muster up nine divisions and five mechanized brigades. The Indian Army matches that with nine divisions on the Sino-Indian border --- one in Ladakh, three in Sikkim, four in Arunachal and two in Nagaland and Manipur. In addition, India plans to raise a mountain strike corps during the 12th Defence Plan (2012-2017), which will add two more divisions. These will be stationed in the Brahmaputra Valley for launching offensive operations into Tibet.

India not just matches the PLAA division-for-division but, given the PLAA’s revised overall numbers, China’s formations could have significantly less troops than what had been earlier anticipated. That means numerical superiority on the Sino-Indian border quite clearly lies with India.

However, China’s road and rail infrastructure allows it the major advantage of being able to move troops rapidly, even from other MACs. This would permit the PLAA to quickly concentrate a large number of troops in a small area, attacking and overwhelming the Indian defenders at that point. Since the Sikkim and Arunachal roads are poor and railways non-existent, the Indian Army would find it difficult to move defenders as quickly to the threatened sector.

“China’s Armed Forces” is apparently Beijing’s response to the international community’s repeated demands for clarity on China’s worrying military build up. Beijing’s projection of a benign and responsible international image goes hand-in-hand with its rather more bare-knuckled handling of the Diaoyu/Senkaku islands dispute with Japan; its insistence on control over the South China Sea; and its recent protests over Washington’s decision to sell F-16 fighters to Taiwan.
Posted by Broadsword at 12:02

I think you the deployments slightly wrong there 14 corps has 2 divisions 8th and 3rd. Where one is for kargil and another for leh.

What the Special Tibetan Army on the Indian soil you were referring to in the 9 PM NDTV news on 22 April 2013?

This is totally a false news to misguide India at the strategic level. Maybe most of the military in China are in reserved benches but that doesn't undermines the matching or superiority of Indian army over the Chinese army. We have to admit that when it comes to technology,quality,quantity,decision making,network,etc the Chinese are far ahead of us. Yes the Chinese will not get a clear run to score a goal in empty field & will get a fitting reply. But by no means they are equal or inferior to Indian strength. Lastly the Chanakya niti always says that never undermine the enemy whether it is China or Pakistan or Maldives.

How much is the authenticity of this Chinese document.

A white paper made by china for the world. that in itself is suspicious. To allay the fears of neighbouring countries the number of personnel in the standing army might be fiddled with.
So is the information, about the quick move ability, which could be propoganda to make India think that China is much more prepared than it actually is, causing it to be wary of them...

"The document “China’s Armed Forces” has surprised Indian analysts by revealing that the PLA land forces (long regarded as the largest standing army in the world) are actually just half the size that intelligence agencies worldwide had estimated."

I am surprised that these analysts are surprised!!.

These analysts are just proving that they are very gullible.

go to any chinese hongkong store and buy something worth $500- they will bill it as $100, and send it to fool customs, duty and vat, same thing Indian importers are doing- buying at higher, billing at lower price and saving tax...... what i mean to say is that china hides more and shows less, don't underestimate. but that does not mean be afraid. saying that sudden movement in a certain theater is BS. area control and modern battlefield weaponry will lay waste of superior human numbers, making easy airforce targets, and the units that are in adjoining opposite areas can move in to cut their backs, rendering them in a trap like situation, leave the strategy to army, they do it better! we should just concentrate on equipping our army well, developing infra, and leaving behind the hesitation to aggressively end conflicts in our win

Of course 14 Corps has two divisions: 8 Div and 3 Div. But 8 Div is on the LoC with Pakistan, not on the China border. So it is not counted in any Sino-India troop calculation.

1. More men/troops: more meat for the enemies' gun fire, either from the air or from the ground.

So don't comfort yourself in the "numbers".

Read Sun Tzu's Art of War if you want to square up to the Chinese.

India is looking at a scenario of a 2 front war with Pak China in very near future.

with 2014 fast approaching when US scoots out of Af with tail between 2 legs that will allow Pak to re configure its troop deployment from western section with Af to eastern sector with India.

now with China making such deep incursions and even refusing to back off i see a confrontation on a much bigger scale looming.

Simply speaking Chinese presence in DBO is an indication of them trying to complete a linkup Tibet to Karakoram.

I think India doesnt have those many men or roads for guarding border vis a vis China. by including ITBP into IA fold and merging them with MSC will give us the number. Its high time we revive the Tibetan element of SFF to counter China, which as far as I know is not the case anymore since late 1980s and it now comprises only of Indians

The CHINESE HAVE NO EQUAL in their Preparedness and Tactics!

Since you think you are more worldly and wiser than analysts who do this for a living, why don't you give us your evaluation of Chinese force disposition?

Sun Tzu's Precepts to Determine the Victor in a War:
1. Which of the two Sovereigns is imbued with "Moral Law" ie "in harmony with his people"?
2. Which of the two generals has more ability?
3. With whom lie the advantages derived from Heaven and earth?
4. On which side is Discipline more rigorously enforced?
5. Which army is stronger - Morally and Physically?
6. On which side are officers and men More Highly Trained?
7. In which army is greater constancy - in both Reward and Punishment?

Measure the Indian Army against the Chinese Army first on the above bases - then you can determine who will win the war.

The Precepts of Sun Tzu:

1. All warfare is based on Deception.

3. Hold out baits to the enemy. Feign disorder and crush him.

4. If your enemy is of Choleric temper (Indian temper), pretend to be weak and let him grow complacent.

5. If his forces are united separate him.

6. Attack him where he is unprepared. Appear where you are not expected.

A classic preemptive strategy deployed by the Chinese PLA! The Indian fools led by the useless NSA, doesn't have an answer to such a sudden move by China. Indian military planners including the MoD is so inept and lethargic that they cannot even anticipate such Chinese moves. All they can say is "be prepared", when everyone in military knows, we are totally and utterly unprepared. Our time horizon for "preparation" goes into 2020 and beyond! The only strategy India has till then is "sue for peace". China knows this very well. By 2020, China will have a manned space station and the technological gap will only widen. So for the Indians, their strategy of "sue for peace" is a slow-death strategy. Congress is the only political party responsible for such a poor military situation for India. What then are civilian Indians supposed to do, on reading newspaper reports of Chinese aggression? Demand more reservations in all govt. departments based on minority statuses. A hopeless situation for Indians with the existing political system of dynastic politics, especially the Ghandi parivaar.

"Between them, these four Chinese combined corps muster up nine divisions and five mechanized brigades. The Indian Army matches that with nine divisions on the Sino-Indian border"

- So Indian Army is short by 5 Mechanized Brigades so it matches man to man but not machine to machine?

In Infantry division they have 6 division while we have 1 division.
the ratio is 6 : 1 china have clear upper hand

In mountain division they have 0 division while we have 9 divisions.
so the ratio is 0: 9 India have clear upper hand.

Infra structure wise china have about 58,000km roads and rail in south west china while we have 1 national high way in A.P. The districs kurung kumey, upper siang, dibang valley, anjaw dist have no trans arunachal highway. These have boarders with china. the changlang district major part have little or no road.

I am a novice lay man not an analyst but an Indian.

Vietnam defeated China in 1969, India defeated China in 1967 skirmish, Korean War was virtually a stalemate and the Russian war was a small affair which also ended in a stalemate. 1962 war was a defeat of the wrong policies of the political leadership. Despite our army being outnumbered by twice and wrong deployment of Indian troops, casualties and number of wounded on both sides had only marginal difference. Ultimate result was no loss of territory on either side. Akshai Chin was lost even before 1962 without knowledge of India's incompetent political leadership. It is a different ball game today.