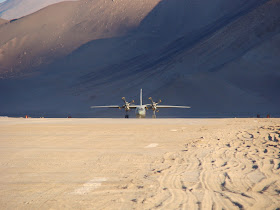 An IAF AN-32 landing at Nyoma in Sept 09, activating the crucial landing ground in Ladakh

China’s intrusion into the Daulat Beg Oldi (DBO) sector, at the northern tip of India just below the towering Karakoram Pass, is a demonstration of anger --- certainly that of the People’s Liberation Army (PLA), and possibly that of Beijing as well --- at the Indian Army’s third surge towards the Sino-Indian border.

The first Indian move to militarily occupy the Sino-Indian border began after 1957, when New Delhi discovered that China had built a nearly 200-kilometre-long highway through the Aksai Chin, a high altitude desert that abuts Ladakh on the east. Belatedly realizing the need to establish a presence along its claim lines in Ladakh and the North East Frontier Agency (NEFA, now Arunachal Pradesh), New Delhi rushed troops into these unknown areas in what was known as the “Forward Policy”. With the PLA fearing that India was backing a massive Tibetan rebellion, and with that apprehension inflamed by the refuge that New Delhi granted the Dalai Lama India in 1959, the Indian move forward degenerated into war.

The second Indian move to the border began in 1982. Army chief, General KV Krishna Rao persuaded Prime Minister Indira Gandhi that twenty years of fearful holding back had to end and the Indian Army moved forward again, deploying in strength over the next four years in Tawang and Chushul. In 1986, a Chinese patrol pitched up tents in a disputed area called Wangdung, north of Tawang, triggering a furious Indian Army build up that came close to actual hostilities. China sought a flag meeting; the PLA realized that it was dealing with a very different Indian Army from the one it had whipped in 1962. Diplomatic engagement led to Rajiv Gandhi’s 1988 visit to China. In 1993, Prime Minister Narasimha Rao visited Beijing and signed an “Agreement on the Maintenance of Peace and Tranquility along the Line of Actual Control (LAC) in the India-China Border Area,” which maintains a largely peaceful border even today.

We are now in the middle of the third Indian surge to the border and, like the previous two, it is being contested by China. It began with the raising of two Indian mountain divisions for the defence of Arunachal Pradesh and with the activation of three Sukhoi-30 fighter bases in the Brahmaputra valley. Simultaneously, seven Advanced Landing Grounds (ALGs) in Arunachal were refurbished, permitting their use for forward replenishment and for heliborne operations. Two armoured brigades are currently being raised and a mountain strike corps will begin raising shortly. The improvement of road infrastructure forms a part of this effort.

In Ladakh, too, India is thickening its presence on the Line of Actual Control (LAC), the de facto border with China. The arrival of 8 Mountain Division in Kargil during the Kargil War freed a full brigade for the LAC. With militancy reducing in Kashmir, another brigade moved out to Chushul. Landing grounds were activated in Nyoma and DBO and roads started coming up to connect isolated posts.

All this raises China’s hackles. Road building near the LAC, especially in the areas of Chushul-Demchok and a new alignment that will connect DBO, has been steadfastly resisted by the PLA. Chinese patrols objected to new bunkers built by the Indian Army near Chushul several years ago; like today, the PLA retaliated by establishing a camp on India’s side of the LAC, forcing the Indian Army to negotiate a settlement. The current PLA encampment at DBO is again retaliation for Indian Army defences constructed elsewhere.

The Indian Army has no good options in DBO, unlike in 1986 during the Wangdung intrusion. Then, the army was close to its road head and the helicopter base at Tawang, permitting a massive build up that quickly dominated the Chinese camp (that the Chinese are still there is another matter). Today India has no surface link to DBO, and the DBO landing ground permits only a limited build up. In contrast the Chinese enjoy a road link to their camp across the wide Depsang Plain. Like in 1962, India’s logistical build up has not kept up with the operational build up. Now there is little option but to negotiate a Chinese withdrawal.

China has clearly signaled its discomfort with India’s troop build up, submitting a draft proposal for a freeze on troop levels that will solidify and make permanent India’s disadvantage along the LAC. The Ministry of External Affairs (MEA), eager to create “deliverables” that could create an air of success around Chinese Premier Li Keqiang’s visit to India next month, is studying the proposal.

China’s strategy is evident: to confine Indian strategic attention to the Sino-Indian border, preventing New Delhi from looking beyond at Tibet and Xinjiang, China’s most sensitive pressure points. Beijing apprehends --- with the fearfulness of a state that knows its weaknesses --- that signing a border settlement would free India from the burden of having to continually lay claim to, and physically defend, a challenged border. China realizes that a settlement would change the fundamental nature of the New Delhi-Beijing engagement. No longer a supplicant, India could raise the issue of Tibet, a lead that western democracies would quickly follow.

So far, India’s military, bureaucracy and political elite have fallen for China’s game, directing their energies into placating China in the hope of a border settlement. Realizing our ill preparedness to defend our territorial claims has created endemic strategic defensiveness. New Delhi remains disinclined to change the game by challenging China on Tibet.

This remains so despite frequent reminders of China’s vulnerabilities. On Tuesday, 21 people were killed near Kashgar, in Xinjiang, in a violent armed stand off. The anger against Beijing in its restive border regions was again underlined on Wednesday when two Tibetan monks in Sichuan set themselves afire, adding to the gory tally of more than 100 self-immolations since 2011. China has flooded Xinjiang and Tibet with black-suited armed militias, whose members now carry portable fire extinguishers to douse Tibetans who are attempting self-immolation. But there remains widespread resentment at Beijing’s increasingly colonial presence in these areas.

In contrast, India’s border population along the LAC remains heartwarmingly Indian. In Ladakh, Himachal, Uttarakhand, Sikkim and Arunachal Pradesh, despite New Delhi’s inexplicable neglect, pro-India sentiment is high and China is regarded with distrust and suspicion that is constantly reinforced from across the border.
Broadsword at 07:14
Share