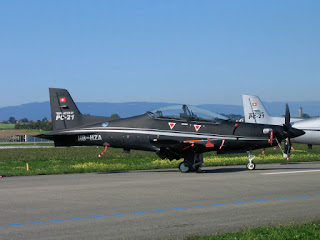 The Indian Air Force (IAF) will order 37 additional Pilatus trainer aircraft from Swiss manufacturer, Pilatus Aircraft Company, over and above the 75 trainers that the IAF has already contracted for Rs 2,900 crore. That will take to 112 the number of Pilatus PC-7 Mark II trainers on order from the IAF.

A top IAF official told Business Standard, “The contract for 75 Pilatus trainers, which was signed last year, includes an options clause that allows India to order an extra 50% of the contracted number of aircraft (i.e. 37 trainers) at the same price as the first 75 trainers. We will exercise this options clause this month.”

The first 75 Pilatus trainers were procured at a unit price of about Rs 30 crore per aircraft. At that price, the additional order will be worth about Rs 1,250 crore to Pilatus Aircraft Company.

The first three PC-7 Mark II aircraft have already been delivered by Pilatus. The IAF official who spoke to Business Standard said that 14 trainers, nearly a full squadron, would be delivered to the IAF by June. The IAF pilots course that begins initial training in June will learn to fly on the PC-7 Mark II.

This is an enormous relief to the IAF. Its longstanding basic trainer aircraft, the indigenous HPT-32 Deepak, has been grounded since a crash in July 2009; a total of 19 pilots have died while flying this unreliable aircraft. Since then, IAF rookie pilots have undergone a greatly curtailed Stage-1 training (as basic training is called) on the Kiran Mark-I trainer, a complex aircraft that is normally flown by pilots who have already learned basic flying on a simpler machine. This compressed training has placed a question mark over the flying ability of recent IAF batches.

But the course that begins training in June will fly a full training syllabus of about 65-70 hours on the PC-7 Mark II in Stage-1 training before they commence another 65-70 hours of Stage-2 training on the Kiran trainer. After that they graduate to Stage-3 training --- 65-70 hours on the Hawk Advanced Jet Trainer (AJT) --- before joining a frontline combat fighter squadron.

Even after exercising the option for 37 more PC-7 Mark II aircraft, the IAF will need 71 more trainers to meet its overall requirement of 183 basic trainer aircraft. Earlier, Bangalore-headquartered Hindustan Aeronautics Ltd (HAL) was to design and build 108 aircraft, dubbed the Hindustan Turbo Trainer – 40 (HTT-40). But, as Business Standard first reported (Dec 19, 2012, “MoD rejects HAL’s proposal to build basic trainer”) the MoD scrapped HAL’s proposal last September since its trainers would cost significantly more than those on offer from Pilatus.

The Pilatus PC-7 Mark II offers far more safety and training features than the vintage HPT-32, which did not even have an ejection system; in emergencies, pilots ejected manually. The HPT-32’s obsolete instrumentation and avionics restricted training to good weather. Its cockpit had no recording equipment that could monitor trainee pilots while they were flying solo. Unlike the older aircraft, the PC-7 Mark II can perform aerobatics, and train the rookie pilots on instrument and night flying and basic tactical operations.

The PC-7 Mark II is a hybrid aircraft, in which a PC-9 airframe has been mated with a smaller PC-7 engine to lower procurement, flying and maintenance costs. The trainer is in service with several air forces, including South Africa and Malaysia.

After long lapse of time they came to the correct path. It is heartening to see these trainer aircraft getting included.

This till the finance minister and other political netas will put a stop to it, stating financial crunch, the IAS will siphon off the money as they have done for the ONE RANK ONE PENSION that the veterans have a right to and fool the Indian public that whenever beheading of Indian soldier takes place or violation of our borders, they will give a stern yap yap, lip service that neither Pakistan nor China cares of. After all INDIA is the ONLY COUNTRY WHERE HER SOLDEIRS GET KILLED BY ENEMY ACTION EVERYDAY YET states herself not at war!!!

HPT-32's obsolesce is known since quite many years. So obvious arises, why did not IAF planned for its replacement in time?

Is it not utter disturbing that at one side IAF is going to get fifth gen fighters from home industry but at other its most basic aircraft are coming from foreign?

What if IAF had projected its acquirement for HPT-32 BPT in around year 2000 and asked for proposals from Indian industry (read HAL)?

HAL's primary responsibility should have been design, and manufacture of aircraft as per Indian forces requirement. It has been reduced to something like an MRO for the aircraft. It has failed miserably to come up even with a 'basic trainer' so far. LCA is nowhere near required standards, and appears to have been a waste of time, waste of money and a pastime for a few HAL honchos.

Today, HAL has 19 Production Units and 10 Research & Design Centres in 8 locations in India.

If in spite of such huge infrastructure and talent pool it cannot come up with one tangible of example of even a basic trainer, it's high time to disinvest and hand over the resources to reputed Industrial houses in India like Tatas/ Birlas/ Bajaj etc. These will do spectacularly well, given a chance.

'Sarkari Babu' mentality prevailing in HAL should be scrapped for national interests.