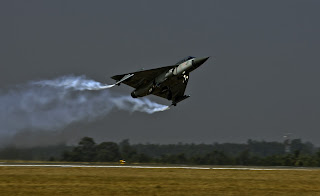 The Aero India 2013 show, which began at Bengaluru today, had a most unusual feature --- significant participation from aircraft that were designed and built in India.

Defence Minister AK Antony, who inaugurated the five-day event on Tuesday morning, began with the usual statements like “Self reliance is our focus area”, and “Indian companies, both private and public must spend more on R&D.”

But, from the time a Dhruv Advanced Light Helicopter (ALH) in army camouflage appeared before the spectators, disgorging commandos who slithered down a rope from the hovering machine, there was a sense that something was changing. And when the DRDO-built Tejas Light Combat Aircraft screamed off the runway and stunned the gathering with a brand new repertoire of aerobatic manoeuvres --- including loops, barrel rolls, high and low speed passes and a climactic vertical Charlie --- there was a palpable sense that this was now a combat machine, not just a DRDO pastime.

The handclapping for the Tejas had barely died down when the Light Combat Helicopter --- like the Dhruv, built by Hindustan Aeronautics Ltd --- appeared, painted black with a wasp-yellow tiger’s head on the fuselage. The LCH’s flying display quickly demonstrated that, over the last two years, the Indian Air Force’s airborne firebase had made important steps towards completion.

On Friday Feb 08, at Aero India, HAL will formally hand over to the Indian Army its first two home built Rudra helicopters. These heavily armed adaptations of the basic Dhruv helicopters are equipped with all the weaponry that is needed to support infantry soldiers in combat. The Rudra’s nose bristles menacingly with a Nexter cannon that can pour a thousand rounds per minute onto a target. Fitted on struts alongside the helicopter are rocket launcher pods and an anti-tank guided missile that will unerringly strike an enemy tank that is 5 kilometres away.

Business Standard has learnt that the Rudra obtained its Initial Operational Clearance last week and will now be in user service with the army. Over the coming months the army will develop doctrines and tactics with the new machine. Based on this experience, the LCH --- which uses many systems that have been built into the Rudra --- will be adapted and modified. This will save time in the LCH’s development process since practically its entire armament and sensor package would have been tested and brought into army use while the flying package is completed and tested.

“We are going to build 54 Rudra helicopters for the army and air force. We will go straight from development into full-scale production,” says P Soundara Rajan, the head of HAL’s Helicopter Complex, which is increasingly driving innovation in that company.

Another indigenous system that made its public debut at Aero India 2013 is the Airborne Early Warning & Control (AEW&C) System. Mounted on an executive jet procured from Brazilian company, Embraer, this unusual aircraft has a large flat radar antenna mounted above the cabin. Manned by IAF controllers, this will scan hundreds of kilometres of airspace, picking up every flying object and differentiating enemy aircraft from friendly ones. Developed by the Centre for Airborne Systems, a DRDO laboratory, this aircraft will be an airborne command centre from where the IAF will control the air battle.

But along with some success, Aero India 2013 also underlines major gaps in our indigenous capability. Even as the Rafale medium fighter delighted the crowds with its aerobatics, and drew throngs as a ground display, indigenous capability in the realm of medium fighters currently takes the form of a mock-up of the planned Advanced Medium Combat Aircraft (AMCA), placed in the stall of the Aeronautical Development Agency.

Any change to this will be driven from Karnataka, if Chief Minister Jagdish Shettar has his way. Speaking at the inauguration, Shettar passionately argued that Aero India continue to be held in Bengaluru, since the city has historically been the hub of Indian aviation. The Ministry of Civil Aviation had suggested moving Aero India to a city where commercial flights would be disrupted to a lesser extent.

But Shettar declared: “The history of aviation in India began in Karnataka. Barely eight years after the Wright brothers’ historic first flight (in 1903), the first Indian aviator was Venkata Subba Shetty of Mysore. The first aircraft factory in India, Hindustan Aircraft Limited, was set up in 1940 by Walchand Hirachand in Bangalore. The first aerospace laboratory, i.e. National Aerospace Laboratory, was established in Bangalore in 1960. The Indian Institute of Science, Bangalore, was the first institute for aeronautical physics in India; and the first course started in 1942. Today, Karnataka is the aviation hub of the country and produces more than a quarter of all components. Karnataka is home to a large number of aviation and defence research centres.”

It was a convincing argument. At the end of the speeches, Antony announced: “I now declare Aero India 2013 open. The next edition of the show will be held from 18th to 22nd February 2015 at the same place, in Bengaluru.”
Posted by Broadsword at 07:56

The first time that the Tejas made a public appearance was at the Aero-India show in 2003. It was restricted to +2g and flown by Sqn Ldr Suneet Krishna. Ten years down the road, it can perform impressive maneuvres upto +5g, as demostrated by Gp Capt (Retd) Suneet Krishna...but has still not obtained the Initial Operational Clearance (IOC), which will allow it to enter service to fly within a restricted envelope. The IOC Phase I, as reported by some, in 2010, is an absolute canard, stated, maybe, for political mileage. There is only one IOC and FOC (Full Operational Clearance), which are internationally recognised terms. Therefore, until the aircraft is inducted into service, it will remain a 'DRDO toy'.

Doubting Thomases now have reasons to believe that HAL Can indeed deliver.Too many brickbats are having some effect on functioning of HAL.Better late than never.

India is on the path to becoming an leader in aviation technology if the GOI and the military understand that only indigenously developed technology will enable India to become self-reliant and beholden to no other race or nation. For we are unique among the races of the world. Perhaps today its the turn of the Europeans, tomorrow maybe the Chinese, but us Indians are coming up fast and we definitely have plans for the long term. Proud to be Indian.

Col. Shukla could you please give us a status update of the production lines for Tejas at HAL. What is the progress on resolving production line issues? When and how exactly does HAL plan to deliver the order of 40 Tejas MK1 to the IAF? Are there some penalties imposed on it for not meeting deadlines? They can't seem to manage fulfilling existing orders and keep biting off more than they can chew with new Rafale deals. How many production lines are there for Tejas and why can't the number of production lines be increased to cut down time?

Great to see progress in desi aircraft. But we have miles to go .....

After so many heart burning for years, now we can say that at least Tejas-Mk2 is going to be a straight forward success.

Though I fully agree with him on the IoC-1 being a mere formality, the point is NOT that DRDO must get the IoC-II and all other approvals from a belligerant IAF.

The real point is that IAF must stop nitpicking on trivialities, and pick the Tejas as it is. Fast. Changes can come in later tranches.

The US Air Force inducted the F-16 after just 3 years. Over the past 40 years, it has been perfected as time changed.

In any case, the Tejas AS IT FLIES TODAY, is much much better than the most advanced MiG-21, MiG-23 or MiG-29 !! So, if the IAF can fly these outdated Soviet planes, what is stopping it from inducting the Tejas next week ?