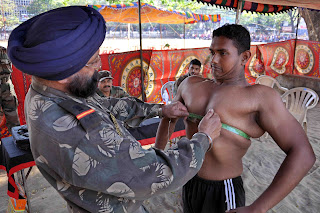 Indian defence gains muscle from the Russian partnership but, contrary to the breathless reporting, no new contracts were signed yesterday

Russian president Vladimir Putin’s sixth visit to India on Monday has been his most barren yet in terms of defence contracts signed between the two countries. An earlier Indian order, placed in Feb 2010, for 59 Mi-17V5 medium lift helicopters was increased marginally to 71 helicopters. And a protocol signed last year for the purchase of 42 Sukhoi-30MKI fighters led to the signing of a contract for 42 kits for licensed manufacture in HAL.

Never having had to compete for defence contracts in India, Russia faces increasing difficulties in competitive contracting, which is now mandated by the Defence Procurement Policy of the Indian defence ministry (MoD). But Moscow remains India’s largest weapons supplier, by virtue of transitioning up the procurement chain. A step ahead of the competition, Russia has offered defence equipment first as arms sales, then licensed production, then joint development, and the growing supply of what is euphemistically known as “sub-strategic” systems.

One such system, the nuclear-propelled attack submarine, INS Chakra, joined the Indian Navy in April on a ten-year lease for US $920 million. Defence Minister AK Antony has confirmed that there is a proposal to lease a second submarine. Russia’s ambassador to India, Alexander Kadakin, terms the Chakra “a shining example of the very confidential strategic cooperation between India and Russia.” Off camera, Kadakin flatly --- and factually --- states that no other country would transfer such a system.

India pays a price for this privilege. When Russia raised the price of the aircraft carrier INS Vikramaditya from $947 million to $2.3 billion, India quietly acquiesced. And when the delivery of the vessel --- which was originally scheduled for 2008 and then delayed to 2012 --- was pushed back by another year after a major engine failure during pre-delivery trials in September, India acquiesced again.

The matter was raised during President Putin’s visit today. It had been raised more strongly by Antony with his counterpart, Anatoly Serdyukov, when the former defence minister had visited India in October.

But Russia repeatedly compensates in the “sub-strategic” segment that remains below the radar. The indigenous nuclear ballistic missile submarine, INS Arihant, continues to benefit from significant Russian technological advice.

Another strategic programme being negotiated is for the “precision code” of Russia’s GLONASS satellite navigation system, an alternative to the US Global Positioning System (GPS). This would provide Indian aircraft and weapon systems with a navigational accuracy of one metre, something that only US and Russian systems currently enjoy. MoD sources tell Business Standard that the matter remains “under discussion” but will eventually yield results.

Russian officials also cite the joint development programmes that characterize Indo-Russian defence cooperation. The Brahmos joint venture has yielded a sophisticated supersonic cruise missile that is now being developed into a hypersonic missile that will travel at above Mach 6 (4,300 kilometres per hour). The supersonic Brahmos, meanwhile is being adapted to be fired from a Sukhoi-30MKI fighter.

Next year, design and development will begin on the $6 billion Indo-Russian programme to jointly develop a fifth generation fighter aircraft (FGFA). No other countries are collaborating on such an advanced aircraft, which involves sensitive technologies like stealth. Another Indo-Russian JV, Multirole Transport Aircraft Ltd (MTA Ltd), began work this month on a military transport plane for both air forces.

Given the strategic relationship, New Delhi considers Russian sensitivities. After the Russian MiG-35 was rejected in Apr 2011 in the Indian contest for 126 medium multi-role combat aircraft (MMRCA), the MoD ordered 42 additional Sukhoi-30MKI fighter, without any tendering or competition.

For Moscow, New Delhi is an increasingly crucial partner, and not only because India buys 30% of all Russian arms exports. Joint development with India reduces development costs and risk at a time when Russia is spending heavily on modernising its forces. Its State Armament Programme will spend almost $650 billion to increase the proportion of modern weaponry in the Russian military to 30% by 2015, and 70% by 2020.

Russian analysts close to the Kremlin are urging Moscow to deepen “an emerging common defence market” between the two countries. They are recommending the co-development of a fifth-generation medium fighter program in addition to the FGFA (which is a heavy fighter); and an advanced battle tank based on the Russian Armata.

A correction: The so-called FGFA is NOT being "jointly developed", contrary to statements coming from HAL, MoD, IAF etc.

India shall only purchase 144 of the Russian-designed PAK-FA, outright. HAL will assemble it under license.

Even if some avionics etc. are customized, that won't count as "joint development". 'Cutomization' is a more appropriate term, and which we've already experienced with Su-30 MKI over the past decade.

I still don't understand why the Indian media keeps referring to the FGFA as a "joint development" between India and Russia.

The friendship with erstwhile Soviet Union and then the Russian Union has stood our country in good stead. Its good that India values this relationship and is investing in it. So what, if there are some niggles as epitomised by the delay in the case of Vikramaditya. Don't we have have slippages in our own defence projects like the Tejas, Arjun etc. We must continue to have a cooperative relationship with the Russians.

hello Ajai,
Recently I read an article in a defense website(forgot it name)about burgeoning India- Israel defense ties, which stated that Israel is willing to give cutting edge technology to India which US and even Russia is not willing to provide with.How true is that?

How is the photograph in sync with the article?