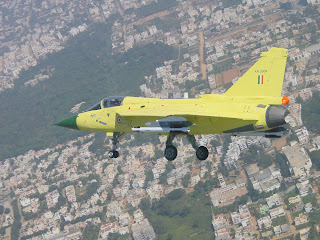 File photo of LCA in flight tests over Bangalore

The Tejas Light Combat Aircraft (LCA), which has remained grounded for more than three months, finally resumed flight-testing last week. Seven flights of the Tejas have taken place since then without mishap.

The grounding of the Tejas, which was kept a secret, took place because of the new pilot’s helmets. Since these protruded above the ejection seats, the helmets could have prevented a smooth ejection by smashing into the fighter’s canopy before it was blown off. Since that constituted a serious safety issue for the pilots, flight-testing was halted since August.

The Defence R&D Organisation (DRDO) chief, Dr VK Saraswat, confirmed to Business Standard that the problem had been resolved. The Aeronautical Development Agency (ADA), the DRDO agency that oversees the Tejas programme, has now provided a backup mechanism to blow off the canopy before the pilot’s head struck it.

“Yes, we had about three to three and a half months of gap [in flight testing]. Now that problem has been resolved. We have modified the Martin Baker ejection seats, making them more reliable and giving more confidence to our pilots. With that behind us, I think we are roaring now,” said Saraswat.

For the Tejas’ flight-test programme, which is already behind schedule, this three month delay has been a blow. The Initial Operation Clearance (IOC), which was scheduled for end-2010, and which the Indian Air Force (IAF) accorded only provisionally in Jan 2011, is now expected only around mid-2013.

The Final Operational Clearance (FOC), which clears a fighter for combat operations, was scheduled for end-2012. This could be delayed by at least two years.

An upbeat Saraswat says the three-month delay gave ADA an opportunity to resolve several other problems, which needed to be done on the ground.

“We have made use of this time by solving many of the problems which were part of the feedback that came from the flight test programme. I feel that by middle of next year we should complete (the IOC),” said Saraswat.

The Rs 14,047 crore LCA project involves building an air force version of the fighter in two models --- Tejas Mark I; and Tejas Mark II --- as well as a naval version that will operate from aircraft carriers.

The IAF has already placed orders on Hindustan Aeronautics Ltd (HAL) for two squadrons (42 fighters) of the Tejas Mark I aircraft. Defence Minister AK Antony told parliament on May 21, 2012, that the IAF would be delivered six squadrons (126 fighters) by the end of the 13th Plan, i.e. by 2022.

While this was not specified, the next four Tejas squadrons will be of the Mark II fighter, which will field the more power General Electric F-414 engine. The government has allocated Rs 4,353 crore for developing the Mark II fighter.

Meanwhile Pakistan’s light fighter, the JF-17 Thunder, which was developed in partnership with China, has achieved combat status. Three squadrons of the JF-17 are already in service in the Pakistan Air Force, and a fourth is currently being raised. The PAF expects to eventually operate some 12-13 squadrons of the fighter.
Posted by Broadsword at 08:37

1. Is it that difficult to develop a ejection seat in India, if we had one I dont think it would have been a problem with Tejas?

2. Is it a impossible to increase the thrust output of a engine?

3. I believe Tejas Mk1 is well on its way to be used as LIFT (lead in fighter trainer) rumors of which were rife since the time Tejas Mk1 numbers were capped at 42

4. Just like the Arjun project i think their could well be a Tejas Mk3 as a 5th generation 10 ton plus stealth aircraft.

5. It will mean India will eventually become only country to field 3 5 generation jets. A 30 ton plus FGFA, a 20 ton plus AMCA and 10 ton plus LCA.

6 While FGFA work depends on fast Russia works, LCA Mk3 depends on how fast LCA Mk2 gets FOC, the biggest problem is AMCA is still a on paper concept, a worrying sign

What are the technical difficulties India have in developing LCA tejas programme? And exactly how China/Pakistan was able to do it? reverse engineering?


Thank You Sir for this article.

Last year they have grounded due to fuel tank issues (due to uneven supply of fuel from 7th & 8th tank which is affecting the centre of mass, most probably not sure) but they have modified in some LSPs but left out some.

So have they utilize this time for resolving the fuel tank issues in other aircrafts also, which has not done last year ?

What about the EW test to be done in PV1/ PV2 version which you have published last year ? is there any progress ?

What about the status of LSP 8 & NP2 ?
Please provide some information about weight issues that ADA & boieng are working on in NP2.

Kindly provide some information on series production status & where they stands as of now ?

Thanks again & waiting for your reply.

Another step in the process of developing our own indigenous aeronautical capability and industry. This is the way to go forward instead of just getting the imports from other countries.

Stop developement and import it from China's J17 for Indian defence at lower cost.

What will I will tell. IAF will cancel all LCA order and order all RAFAEL fighter (124+250). All the development will go in drain. The DRDO employee with get nice pension and earn medal for worthlessness. Hard earned tax payer money goes wasted.

A hilarious idea. Chinaa will even agree for the $$$. Pakistan will explode.

But India needs indigenous aircraft manufacturing ability. I don't understand why did not purchase the complete production line for the Su-30MKI. Its much cheeper than the RAFALE, has grater payload and radar.

Delays like this are quite common in the development of advanced fighter aircraft. The history of the Tejas is well-known, with the ambitious nature of the program, mis-steps, sanctions, the need to develop not just the aircraft but also the entire industrial base to build/maintain it etc etc.

Can we go easy on the self-flagellation? Its a curious habit of Indian journalists to call a delay "a blow", "a setback", "the Tejas limps" and what not.

Thanks to Ajai for pointing out the cause of the delay, because it brings home the point about how we have to get a million design aspects correct to build a flyable plane. I wish he had done it without the hyperbole.

I dont get the point of the JF-17 comparison. Its not as if JF-17 is a Pakistan designed aircraft. If the point was to show that Pakistan is narrowing the air-gap, then yeah, maybe there is a point.

These delays suck, but we have to keep the faith. This is the beginning of what is going to be a long, upward road to self reliance in the military aerospace industry.

so since 1980s they only found out that their design for [pilot ejection was faulty..and they want us to abandon the T90 for arjun which in paper was hyped as 'guderyn's own just as the LCA was flying in brochures with indegenious engines and TATRA truck had been indegenised.