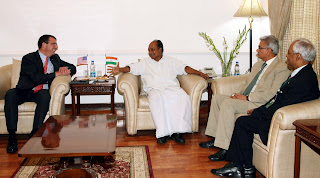 In New Delhi today, visiting US Deputy Secretary of Defence Ashton Carter declared that the Pentagon had, in the last two months, decided to move beyond merely selling India weaponry, towards a technology partnership in which American and Indian scientists would develop defence products together.

In June, US Defence Secretary Leon Panetta had appointed Carter his point man, specifically for deepening “defence trade” with India. But in Carter’s first visit to India since then, he avoided that phrase, talking up “defence cooperation” instead.

Responding to a question from Business Standard about the switch from “defence trade” to “defence cooperation”, Carter admitted that this reflected a better American understanding of New Delhi’s requirements.

“Trade suggests a buy or sell relationship or transactions. One of the things… Secretary Panetta and I learned as we… talked to our Indian colleagues…, we learnt that what India wants, and what we would want in the long term, is more than just buy and sell. We want to do things together and we want to develop products together and we want to produce technology together. So there is a little bit of a difference between trade and cooperation. And between the two we are really looking at cooperation.”

Carter said he remained upbeat about his mission even though he had no interlocutor. “I’m really focused on results not the mechanism. And I think we’ll get the results with whatever is decided on the Indian side,” he said.

Addressing a business and media gathering organized by CII, Carter outlined what he said were practical steps that could improve US-India defence cooperation.

First amongst them was to limit the powerful Washington and New Delhi bureaucracies that cited outdated rules and regulations to limit cooperation. “The only limit to our cooperation should be our independent strategic decisions – as any two states may differ – not bureaucratic red tape…. Our shared challenge in the next era is to find concrete areas to step up our defense cooperation, so that only our imagination and strategic logic, and not administrative barriers, set the pace,” said Carter, urging both sides to “set big goals.”

Carter talked up trust on both sides. “Practically, we want to be India’s highest-quality and most trusted long-term supplier of technology, in such fields as maritime domain awareness, counter-terrorism, and many others. We are committed to India’s military modernization. India is a top priority in our export considerations. We trust India and know India is not a re-exporter or exploiter of our technologies,” he said.

The ongoing reform of the US overall export control system under the “Export Control Reform initiative” would ease many of India’s concerns, said Carter. “India has been very frank in expressing its concerns with U.S. export controls and technology security policies.  We are taking real steps to address India’s concerns,” he said.

Carter also urged New Delhi to consider two measures that would deepen US-India cooperation: reworking the defence offset policy, and enhancing foreign investment limit of 26% in the field of defence.
Posted by Broadsword at 19:17

I doubt whether they will transfer technolgy as much as Russia or France, still it is a very good start. Atleast if they give critical equipments eithout signing CISMOA or other end-user agreements, it will be very useful.

The indian R&D establishment must be quietly fuming at guy just as they did back during indo-US nuke deal.

This Cartor guy talks so grand as if india is going to get it all for free.

But it's a nice speech. Just like Obama, all his subordinates are good orators too.

Americans may not give as much as Russians or French, but there are two things wrong with this argument:

2) Not stating that US has a lot more high tech then Russians and the French. The US has been a technology leader, the Russians and the French are always playing catch-up. So if the US sells us their older version, it's likely to be on-par or superior to what we can get through any other suppliers.
The only down-side I see with the US is the cost. But then again, there contract costs do not change half-way during the manufacturing or delivery phase and their timelines are probably quicker and more likely to be on schedule then our traditional suppliers. In the end if you get the contract terms right, then with the US you will get what you paid for.

Think, what carter wants is a open market in defense which is currently pegged at 26% (FDI)... This means that firms which have long history of making defense products and billions of dollar at their disposal would enter India and kill the Indian defense industry. There is no secret to it. He wants LSA, and 2 other agreements which would make India and Non NATO ally. Bear in mind, that defense products is usually used a tool in establishing foreign relations. China will not attach India, India will not attack Pakistan for a foreseeable future. If India wants to contain China independently..am sure the recent developments regarding the far east nations has already given jibes in china administration. China cannot afford to make enemies everywhere. India MUST NOT comply to these USA proposals and just stay the course.

Even i don't think any country will sell their latest version. Whatever USA is offering to India will be 90% similar to what they use.
My point is with USA, we will be only an end-user, they will never give access to their technology, even for their older versions. Technology transfer is something USA blocks even to Britain, so where will we stand? We can never develop our own(indigenous) product.
But we will get what we pay for, with USA, without any delays and the quality of the product will be great.

So all this co-operation seems to focused on removing the offset restrictions and the foreign ownership limit.

Perhaps the US can signal their commitment by an equivalent measure before India does anything.

US seems to be coming forward now on the right foot wrt India. Carter must be intelligent enough but someone else from US should not backtrack now with another statement just to appease China and/or Pakistan.

Russia, Israel and France are already the dependable suppliers and cooperators of India since long. US wants and needs to be included in this list, and they should now be given a chance. Based on its own priorities, India shall preferably cooperate firstly with the US in the fields of the highest technologies only, as it may be a testimony to the generation of the real mutual trust.

Shukla,
At the end of all your recent blog pieces you should have added one more line:
"this is an advertisement"...

Why are we so eager to receive tech transfer? We have done that for a few decades now. I see no evidence of our technical skills being improved by tech transfer. We have yet to buid a jet engine, for the LCA, Tank engine, tank gun, you name it. We have done tech transfers for several decades. All it does is teach us how to assemble various items, but nothing about how and why of any product. The only way you learn to develop one is to go through an LCA type project. That's the only way you will know how the product development works. If tech transfer worked, the LCA would have been inducted in numbers by now. Only thing we can do with Tech Transfer is reverse engineer a product and build illegal copies of it (like China). But, that would not teach us anything when it comes to why certain designs elements that were adopted and what the original designer tried before they got to the final product. There are no easy options if one is trying to get the technical know-how. I wish there was an easier way, but so far I have only known of one, and that is with a lot of blood, sweat, toil and tears.

Is there a country that has benefitted from US technological knowledge sharing and ending up standing on its own feet?

There is not a single country!

What normally happens is that the country ends up becoming more and more dependent on US and then US holds back key technology, such as source codes....> examples, Canada, Australia and UK...aka F18/F35, etc...

Guys can anyone of you guess what the duo are having? I mean what's served on the plates? LOL!

So no one have benifited from US Technical Knowledge Sharing.... I take you for your word. But, then there is no evidence that India has benifited from "Technical Knowledge Sharing" by Russians or French. Today, we are still not able to make a Jet engine for our LCA, even after assembling several for our previously made planes. We are still ironing out issues with our Tejas, Arjun, etc. We have not yet been able to make the engine or the gun for Arjun. We have to buy those from our traditional Technology Knowledge Sharing partners. The only benefit of tech transfer is that you can make illegal copies like China would do and probably sell to other countries who do not care about that kind of violations. IF there was a real benefit, we would have been making a lot more at home by now, but unfortunately we are still dependent on others who sell us what we need in the name of technology transfer. IT's not the technology that needs to be shared, it's how that technology was developed that the recepient should know prior to attempting to make one on their own. No one has held our hand, and probably no one ever will. If we want to develop procducts on our own terms, we will have to do it the hard way.

You are right about that. How many technology transfers but none of them was useful in creating 90 KN thrust engine. Okay we could leave that, because engine may be the most critical one, but even with GE engine,still LCA didn't get FOC.
For Kaveri engine again we are getting assistance from France. That is something to think about.

Let us make a deal - we Indians write all software for all defense systems that are shared by India and the US, and the source code remains with India. Then only proceed.