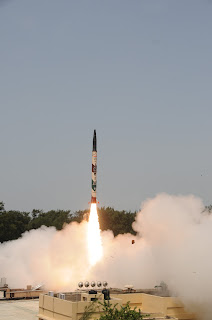 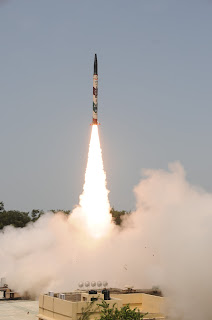 India’s 700 km range ballistic missile, ‘AGNI I’ was successfully launched today from the wheeler island off the coast of Odisha. It was a textbook launch meeting all mission objectives and the missile reached the target point in the Bay of Bengal following the prescribed trajectory.  The missile was launched from Road Mobile Launcher System and was tracked by Radar and Telemetry stations located along the coastline. Two Naval Ships located near the target point tracked the missile in the terminal phase of the Flight.

Indigenously developed by DRDO the missile is already in the arsenal of Indian Armed Forces and was launched by the Strategic Forces Command as part of training exercise to ensure preparedness.

Dr Saraswat congratulated all the Scientists and employees of DRDO and the Armed forces for the successful launch.

Defence Minister Shri A K Antony has congratulated the DRDO team on the successful launch of Agni I.
Posted by Broadsword at 13:10

Are we going in circles? Some months back it was the case of testing agni 4 and 5, now back to square 1>

Is DRDO desperately trying to divert our atention from its failures, cheating the govt, and lying to India abt its delivery of LCA,IJT , thus the IAF being vacant of basic trainers cumilating in deaths of young pilots and fooling the Indian by its emotional blackmail of indeginisation

I don't see the logic of going around in circles here. One test of Agni 4 or 5 doesn't mean that it is ready for induction. They have to go through a series of tests before they can be declared fit for induction.

Agni 1 is being tested post-induction for routine training exercise.

Read the post carefully, and please don't deride DRDO for no reason.

I'm curious about the conventional role of Agni-I. Are there any plans/preparations to use it against Chinese installations in Tibet/Chengdu?