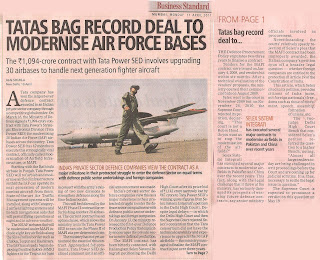 Last year, the MAFI contract (see my story, above)... now the TCS development. The private sector finally has its foot in the defense production door. Now let's see it deliver.

In a long-anticipated move towards unleashing the abilities of India's private sector in equipping the military, the ministry of defence (MoD) has chosen a private sector consortium to compete with Bharat Electronics Ltd (BEL), the public sector giant, to develop a backbone communications network for the 21st century battlefield. The project is worth an estimated Rs 10,000 crore.

Called the Tactical Communications System (TCS), this network will be created simultaneously by two Indian ‘development agencies', or DAs. Besides BEL, the MoD's traditional go-to shop for electronics and communications, South Block has selected a private sector consortium of Larsen & Toubro, Tata Power (Special Electronics Division) and HCL. The MoD today informed the two DAs in writing about their selection. Business Standard has reviewed a copy of the MoD letter.

The TCS is a mobile communications grid that is rolled out across the battlefield, even deep inside enemy territory, for advancing tank formations. Each TCS provides an army corps (some 60,000 soldiers) with the frequencies and bandwidth needed for its communications, including voice, data and video.

It operates like a cellular phone network, but with three major differences. First, the TCS is mobile, its exchanges and switches installed in high-mobility vehicles that can transport and install these anywhere, including mountains and deserts. Second, the TCS transmits enormous volumes of data, such as map overlays, video conferencing or streaming video from unmanned aerial vehicles. Finally, the TCS maintains secrecy, forestalling enemy eavesdropping by rapidly hopping frequencies, hundreds of times a second, in a coded sequence.

Given the importance of secrecy, the MoD ruled that the TCS must be built in India. It is the first project being taken up under the ‘Make' category of the Defence Procurement Policy of 2008 (DPP-2008). This mandates that an Indian company, or consortium, must develop the TCS, with a minimum 30 per cent indigenisation at the prototype stage.

The two DAs will now take about six months to prepare a Detailed Project Report (DPR). This will define every system, sub-system, and capability of the TCS network. After studying the DPR, the MoD will estimate the cost of developing a TCS prototype. Industry sources say a working TCS prototype for an army division (15,000 troops) could cost about Rs 300 crore. MoD will fund 80 per cent of this cost; the vendors will pay 20 per cent.

The next crucial stage, explains Rahul Chaudhary, CEO of Tata Power (SED), is the building of the TCS prototype, which the two contending DAs would do separately, taking some 18 months. Then, in six to eight months of user evaluation trials, MoD will choose the better design. The DA that indigenises technology better will have an advantage over the one that relies more on foreign technologies and components.

The trials would also give the user a last chance to recommend design changes. The finalised design, to be documented into a General Staff Qualitative Requirement (GSQR), will be the TCS that enters operational service. The government could nominate a single winning vendor —between BEL and the L & T-led Special Purpose Company (SPC) — to build all seven TCS systems the army needs, each worth some Rs 1,500 crore. However, most insiders expect MoD would speed up production and hedge risks by distributing the order 65:35, with the superior design getting the lion's share.

About time. Plan AREN and ASCON did their job but to be a modern force with C4I(and more) capabilities, about time we junked the crap that BEL has been doling out. I cant believe that the ANPRC is still in the service. Great move on the MOD's part. Hope the pvt sector delivers

The MOD decision is acknowledgement of Private sector capabilities, though after lot of convincing. Confident, the Users will get the System in time Like PINAKA. Now let us hope FICV decision will follow soon.

This is commendable. They should adopt such modern and fruitful practices more and more.

http://www.bharat-rakshak.com/NEWS/newsrf.php?newsid=19133 interesting article worth the read!

Shukla your TRP's are going down buddy. Do something fast or else they will pull the plug.....Joking, you enjoy luxury to be online with even bad metrics.