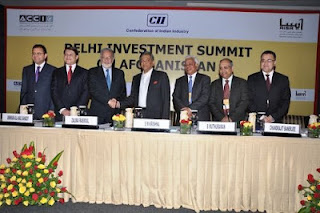 The slick cityscape graphic playing on the screens --- depicting sailboats catching the wind on a grass-lined canal; and broad, orderly roads lined by glass and steel buildings --- was a world away from the grim, gritty reality of Kabul today. But this was the future envisaged by the Afghan government today at the Delhi Investment Summit on Afghanistan, the first concerted attempt to lure foreign investors to that country.

For a decade now, starting from the 2002 Tokyo Donors’ Conference held in the wake of the Taliban’s ouster from Kabul, the international community has passed the hat around for the expenses of running a country with practically no source of income. Next month, the hat will be passed around again at Tokyo to meet the commitments of last month’s NATO conference in Chicago, where the international community pledged its support for another decade.

But after 2024, Afghanistan might well have to pay its own bills. And to get its economy rolling, Kabul is flaunting its natural resources, its hardworking people, and a strategic geography that makes it a land bridge between south and central Asia.

India is playing an anchor role in supporting Kabul’s outreach. New Delhi policymakers worry that the drawdown of NATO forces by 2014 would leave, in the words of Foreign Minister SM Krishna today, “a political or security vacuum that will be filled by extremists once again.”

New Delhi believes that only a rejuvenated economy and accelerated job creation can stave off serious instability, even civil war. Said Krishna, while inaugurating today’s summit: “Let the grey suits of company executives take the place of olive green or desert brown fatigues of soldiers; and CEOs, the place of generals.”

But there was clear apprehension amongst the approximately 150 Indian, 85 Afghan, and 70 foreign companies and organisations at the summit, that Afghanistan’s troubled security landscape is hardly congenial for business investments.

Each of the four senior Afghan ministers who spoke tried to allay those fears, arguing that a minimum level of security already existed, which would greatly improve once the domestic economy picked up steam.

“I would like to assure you that most parts of Afghanistan are stable and secure. Almost everywhere the level of security is well above that which is needed for economic development to occur.  We are well underway towards creating a virtuous cycle in which growth strengthens stability and the increased security leads to further growth,” said Anwar-ul-Haq Ahady, the Afghan Minister for Commerce and Industry.

Said Afghan foreign minister, Zalmai Rassoul: “While it is true that there are certain areas in Afghanistan where the security situation is not ideal, we should remember that these areas represent a small part of the country.”

Besides security, Afghan ministers talked up Afghanistan’s business climate, where Kabul has created a “liberal, legal regulatory regime.” Investors would benefit from a financial investment law based on “international best practices”, the lowest tax rates in the region, 100% foreign ownership of companies and cheap and plentiful labour.

However, corruption remains an investor concern. Afghanistan has consistently scored low on the World Bank’s Doing Business Indicator (DBI). It is also at No.2 in the corruption index of Transparency International.

India has provided Kabul with $2 billion in development aid, making it Afghanistan’s biggest regional donor. Private sector investment, however, has been low at just $25 million, of which only 16% has been in the job-creating manufacturing sector. This is set to change; last year, a seven-company, SAIL-led consortium, named Afisco (Afghan Iron and Steel Consortium) won a contract to develop Afghanistan’s Hajigak iron ore deposits. This is expected to generate $12-14 billion worth of investment, including the setting up of a steel plant, a coal-fired power plant and a hundreds of kilometres of railway lines.

The extraction of minerals is a key element of Afghanistan’s plan for self-sufficiency. Minister for Mines, Wahidullah Shahrani said that revenues from mining would comprise 45% of Afghanistan’s GDP by 2025.

Besides mining, Afghan officials made a plug for investment in the sectors of power transmission; hydroelectric power generation; infrastructure development, agri-based industry; education and healthcare.

According to the World Bank, Afghanistan’s economy will grow at 4.9% annually between now and 2025; this could increase to almost 7% with enhanced progress in agriculture and resources.

Indian foreign ministry officials say that the outcome of the Delhi Investment Summit would play a role in the outcome of the Tokyo Donors’ Conference on July 8th, where Kabul will present an economic roadmap, entitled “Path to Self Reliance”.
Posted by Broadsword at 11:45

Take a look at this map showing the ethnic(and sectarian) composition of afghanistan:

Am I wrong in being pessimistic? Else give me a reason to be optimistic?

I was a follower of your blog but its quality has deteriorated over tym....sad to see that....