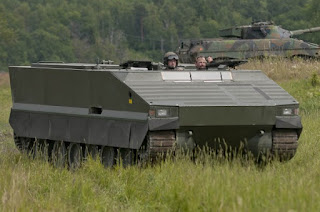 The SEP infantry combat vehicle developed by BAE Systems' Swedish arm for potential users. The FICV will be larger, more lethal and able to swim, something that no contemporary ICV does other than the Indian Army's BMP-2

Last week, the MoD flagged off India’s first competitive development of a major military system, the high tech Tactical Communications System. Now all eyes are on the second, with the MoD finalizing the two winners in the four-cornered contest to develop a Future Infantry Combat Vehicle (FICV) for the army. While figures are tentative, this is by far India’s biggest-ever land systems contract, the Rs 50-60,000 crore production of 2600 FICVs to replace the army’s venerable Russian BMP-2.

Of the four contestants that submitted proposals to the MoD in Oct 2010 --- Tata Motors; the Mahindra Group; L&T; and the MoD-owned Ordnance Factory Board (OFB) --- the MoD will select two as “Development Agencies,” or DAs, who will each design and build a prototype of the futuristic vehicle. The better one will be selected as the final FICV design, which will go into production.

The MoD is pursuing this project under the “Make” procedure of the Defence Procurement Procedure of 2008 (DPP-2008), under which Indian vendors develop major defence platforms. The MoD funds 80% of the cost of developing a prototype that must be at least 30% indigenous; the Indian DAs pays the remaining 20%.

The FICV will be a tracked, lightly armoured, off-road vehicle that can zoom over sand dunes or across a river. Operated by a three-man crew --- a commander, a driver and a gunner --- it will also carry seven fully equipped infantrymen into battle protecting them while they are aboard from bullets and shrapnel. The FICV’s strike power --- an anti-tank missile; a rapid-fire cannon; a 7.62 mm machine gun; and a grenade launcher --- will enable it to destroy enemy tanks, ICVs, missile carriers, attack helicopters and infantry.

“The FICV will be a 22-24 tonne vehicle with the strike power of a 45 tonne main battle tank (MBT),” predicts Brigadier (Retd) Khutab Hai, who heads the defence business of the Mahindra Group.

The army’s insistence on an amphibious FICV constitutes a key design challenge. The generals believe an ability to quickly swim across rivers would be a battle-winning ability in the riverine Punjab plains. The BMP-2, its current ICV, is fully amphibious. But not since the Soviet Union days has any army inducted a fully amphibious ICV.

Since Oct 09, when the MoD approved the FICV project, private sector aspirants like the Mahindras, Tata Motors and L&T have put in place the designers and technical facilities needed for developing the complex FICV in the MoD’s tight timeframes. Now there is concern that, 20 months after submitting their project proposals to the MoD in Oct 2010, the winning proposals have not yet been announced. According to the MoD’s own timelines, this evaluation should have been completed in 8 months.

“The Mahindra Group has invested Rs 30 crore in putting together our FICV team. For two years, we have trained our people, working with our technology partners, BAE Systems, in Sweden; and Rafael in Israel. We are looking for an early decision from the MoD. Keeping this team idle costs us money,” says Brig Hai.

L&T, too, hopes for an early decision. It has set up a design facility at Talegaon, and tied up with technology partners like CMI of Belgium. Interestingly, L&T is looking to Indian company, Ashok Leyland, to play a role in the automotive aspects of the FICV. “L&T’s design strengths are well known. Many hours of skilled engineering have gone into the innovative design that we have presented to the MoD,” says MV Kotwal, L&T’s heavy engineering chief.

Meanwhile, uncertainty clouds the Tata’s proposal, which has German giant, Rheinmetall, as a technology partner. MoD sources say that at least one of Tata’s rivals has objected, pointing out that the CBI is investigating Rheinmetall Air Defence for allegedly bribing former Ordnance Factory Board chairman, Sudipta Ghosh. It is unclear whether the MoD’s delay in finalising the DAs for the FICV is related to this.

The MoD has not responded to an emailed query from Business Standard on this question?

The MoD says that programmes like the FICV, under the “Make” category of the DPP, will be key to developing India’s private defence industry. Vivek Rae, the MoD’s procurement chief, stated during the Defexpo 2012 international defence exhibition in New Delhi in March, that the MoD would soon announce many more “Make” projects.

“There will be a list of 150-180 ‘Make’ projects that (the MoD) will put on the web. With Indian companies tying up with one another and competing, I think we could energise the industrial base of the country. The sheer act of design and development, sharing of risks and sharing of costs (in an 80:20 ratio) will be a very significant move forward,” said Rae.
Posted by Broadsword at 08:04

sir why only tracked ICV's i thought there will be a wheeled version !!!!

What you are saying about FICV gives clear signal that Abhay ICV is now well and truly dead.

Also it looks like the FICV will be used as a light tank (for mountain warfare) considering the amount of firepower it will have.

By the way its a good omen for private defense players in India as after RM Antony removed a DPSU from preferred suppliers list, giving them a chance to gain foot.

But what needs to be seen is that whether exports of FICV will be allowed in future and if the loser is brought in for joint production.

The FICV will be a 22-24 tonne vehicle with the strike power of a 45 tonne main battle tank (MBT),” predicts Brigadier (Retd) Khutab Hai

No ICV can match a MBT... An ICV would always avoid a MBT not take it head on... It is far inferior in armour & weaponry...

20 months and running against an 'own timeline' of 8 months ?! Wonder wat our MOD guys do during Office hours!

Joydeep, clearly you didnt know that the Abhay was a TD program meant to demo technologies for a FICV program and not a product by itself!! It achieved its purpose and allowed the Army to see what was achievable and what was required, which is now in the FICV GSQR!! The pvt companies are likely to approach DRDO for systems developed by the Abhay IFV which is another spinoff of the program!!

Dear Blogg owner.Clear ur thoughts..FICV will mostly have wheeled vehicles and small no. of tracked ones....Search the internet and u find it everywhere

India and its Armoured Corps remains stuck with Pakistan !!

Its high time we out sourced the production to pvt sector, Fire power is inadequate . what about night fighting capability ?? An area where weare really blind !!!

But i thought that Tata's were partnering Rhinemetall Land Systems and that RAD,Zurich is the black listed company.So whats the fuss about!!

The Korean K21 IFV is amphibious.