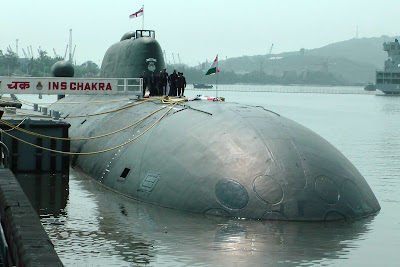 The INS Chakra, minutes before it was inducted into the eastern fleet at Vishakhapatnam on 4th April 12
by Ajai Shukla
Business Standard, 5th Apr 12
A thin trumpet call wafted over the warm, humid air of the dock, heralding the arrival of defence minister A K Antony to induct into the Indian Navy its most recent and most potent submarine, the nuclear-powered INS Chakra. In late February, the Chakra, leased from Russia for 10 years at an estimated cost of $900 million, set off from snowy Vladivostok. After a 40-day underwater odyssey past Japan and through the disputed South China Sea, undetected by anyone, the Chakra reached sweltering Visakhapatnam on Saturday.
Key functionaries of the Chakra’s all-Indian crew lined up on its deck to welcome Antony. The 12,000-tonne Akula II class vessel is a shockingly large cigar-shaped cylinder, painted a drab black. The only splash of colour came from the gold braid on the officers’ shoulders and the fluttering tricolour. Like so many Russian weapon platforms, the Chakra conveys an understated menace — functionality without the frills.
There were brief speeches by the Russian ambassador to India, Alexander Kadakin, naval chief Admiral Nirmal Verma and Antony. Then, a band struck up the national anthem and the Chakra joined the navy’s Eastern Fleet. Kadakin termed this “a shining example of the very confidential strategic cooperation between India and Russia.” Antony took a crack at Kadakin, reminding him of the Russian promise to deliver the Russian aircraft carrier, INS Vikramaditya (formerly the Gorshkov) “on time”. The Vikramaditya is already three years late.
Beyond the banter, military planners are thrilled at this massive boost to India’s power and reach in the Indian Ocean region. While China enjoys military advantages on the land frontier, India’s ability to choke Chinese shipping at straits like Malacca and Hormuz constitutes a powerful strategic lever. And, nothing performs such “sea denial” missions as effectively as a nuclear attack submarine, known by its acronym, the SSN.
Making the SSN a game-changer is its ability to remain submerged indefinitely. Stealth is a key attribute in a ‘sea denial’ mission to shut down, for example, the Strait of Malacca. A submarine must slip undetected (which means underwater) into the patrol area and lurk in ambush for days on end, listening through its sonar for propeller sounds that give away the presence of a ship. Then, it must launch torpedoes to destroy the target and escape at high speed before the enemy can come and destroy her.
One great drawback of the conventional submarine is lack of endurance. Since its diesel engines cannot run underwater for lack of air, it can remain submerged for only as long as its on-board electric batteries provide power. When the batteries are drained, typically in eight-72 hours, depending on how fast it must move, the submarine must surface to run its diesel generators and recharge its batteries. A surfaced submarine with generators running is a sitting duck, inviting an attack by enemy aircraft, surface ships or submarines.
But a nuclear reactor can run underwater, allowing an SSN to remain submerged for as long as its food supplies last. While a conventional submarine moves slowly underwater, to conserve batteries, the Chakra can sprint for long durations at speeds of up to 33 knots (61 kilometres per hour), faster than most surface vessels.
The Chakra’s capabilities are provided by a 190-Mw nuclear reactor, powerful enough to light up a medium-sized city. It is armed with the versatile Russian Klub anti-surface missiles that can strike a ship almost 300 kilometres away. It also has four 533-mm and four 650-mm torpedo tubes.
Says P Asokan, INS Chakra’s first skipper, “I commanded a conventional submarine before this and we were restricted by battery power. But now, I have no restrictions. I can chase a vessel anywhere, overtake her, play games with her, and the nuclear plant never runs out of power.”
Across the water from INS Chakra is the Ship Building Centre, a gigantic hangar where the indigenous nuclear submarine, the INS Arihant, is being constructed. The Arihant is not an SSN like the Chakra; it does not engage in naval warfare. It is an SSBN, a nuclear powered underwater platform from which nuclear-tipped missiles can be launched. The Arihant and its successor vessels would form the third leg of India’s ‘nuclear triad’.
The INS Chakra could be followed by a second SSN from Russia, a proposal the navy has already raised. Questioned on the issue, Antony responded, “There is a proposal (about a second submarine), but we have not taken a decision about that.”
The Indian Navy has 14 conventional submarines in service. Also under construction are six Scorpene conventional submarines at Mazagon Dock, Mumbai, scheduled to enter service by 2018.
According to Antony, seven new warships, including submarines, would enter service with the Navy this year, while an average of five warships would be inducted each succeeding year.
Posted by Broadsword at 10:22

Why don't you join politics and become defense minister of India ?

Finally, the articlet i was waiting for. There is one thing I want to point out. There is that title for the picture "The INS Chakra, photographed by me". Remove that 'Photographed by me', Its understood that you have photographed. You need not state it. Just a suggestion. Please take this with a pinch of salt and correct it. Donot put your ego first and please donot show this to the rest of the world.

The INS Chakra, photographed by me,

Your orders have been implemented in full, Saar!

It is a fallacy that the nuclear submarine has "unlimited range".

They are limited...by food and water supplies..

Col. Shukla, I have always enjoyed your articles in this blog and your attempts at sharp analysis on many issues. The following is regarding your interview on a popular TV Show given to KT. Pardon my unsolicited comment on subject that’s not INS Chakra. You don’t have to publish this in the comment section if you do not wish to.
In the beginning of the interview you say, ‘I have supported him (Gen.V K S) where I think he is right, I have criticized him where I think he is wrong’ and this is a fair statement to make. But in the later part of the interview you start to question Gen V K S’ methods of dealing with issues. When you say I expect him to give ‘crisp’ statements and march with a resignation letter in his pocket you effectively want the Army chief to adhere to your framework of conduct, since he does neither, you no longer support him? That I think is not a fair thing to say.
How many stories do we know of Army chiefs having walked in with their resignation letter in pocket [hand] to MoD and MoD heeding to their demands? How many stories do we know of instances where people have been pacified and consoled with false promises in the past and the ministry and bureaucracy has gone back in to their comfortable slumber? Have you thought about a culture in which if something is not in the media glare then it is not being actioned?
Col. Shukla, have you considered the fact that Gen. V K S is within his legal limits in giving interviews to media and public? But by questioning his means and labeling it as ‘gossip’ you may be losing sight of your journalistic objectivity? Gen. V K S may certainly be a frustrated man with an impaired sense of judgment but he is still operating within the frameworks of legality. If he is being verbose and dramatic, which I most certainly think he is not, in getting the message across then that’s his choice. Any means to achieve right objectives is justified provided it is with the limits of constitution. You have a military background and you have been trained to fight, so please don’t succumb to the fallacies of your mind and allow emotions impair your judgment. The Army Chief might have never sought your support in discharging his duties but you might be failing in yours by compromising on objectivity.
Please do not see this as a criticism but as a constructive feedback.
Satyameva Jayate. May the truth prevail.

Dear Ajay Sir,
We shall not be too much happy by acquiring just one SSN; as we have vast marine interest an shorelines for protection. Moreover, the seas have become more dangerous and threatening as here the real power games are played. Just see the recent Chinese threats and warning to Indian oil exploration in South China Sea (Vietnam/Cambodia)basin. Maldives government is also not too favorable to Indain interest. There are many sea alleys for careful watch and not allowing someone to armtwist us. I would request if you can comment on how much is Turn Around Time (Time to Refit/ Maintenance in Yard) and then operationally deployable in seas for this SSN. Noteworthy is that our VIKRANT aircraft carrier was in Dock going refit in 1965 ware, whereas it sailed in crippled state, with just one boiler firing in 1971 war. Therefore we did not have any airpower projection capability in 1965 and very poor maneuverability in 1971 war. Despite investing huge amount of Tax Payers money, we do not want that this system (SSN) shall be absent when nation needs it most. Rest.. best wishes to SSN team.

pankaj: In what language are you writing? I got a headache trying to decipher your bizarre sms writing style and still could not understand what you were trying to say!