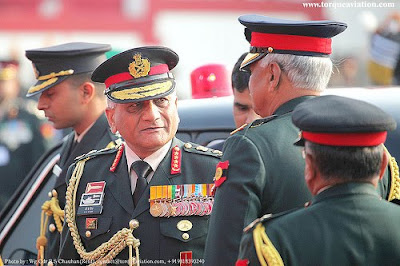 Did the army chief arrange for two units to "practice mobilisation" towards Delhi as a warning to the MoD not to sack him for going to court on the date of birth issue? We might never know the answer!
by Ajai Shukla
Business Standard, 6th Apr 12
An army under effective gag orders is reacting with incredulousness and outrage to a The Indian Express report on Wednesday, under a banner headline, which recounted an “unexpected” and “non-notified” move of two army units towards Delhi on the day that army chief, General VK Singh, filed a writ petition in the Supreme Court against the government on a personal issue relating to his date of birth. The word “coup” does not feature in the report, which instead highlights “confusion and unease” within the top echelons of government at a time of a “strained… political-military relationship.”
Senior serving army generals, talking on the condition of anonymity to Business Standard because Ministry of Defence (MoD) orders prohibit them from speaking to the media, dismiss the idea of a threatened coup. They point out multiple inaccuracies in the Indian Express story, which they say has been “spiced up” without basis.
The Indian Express report suggests near panic in the government after central intelligence agencies detected, on the night of 16th Jan, army movement towards Delhi from the cantonments of Hisar (165 km away in Haryana); and from Agra (204 km away in UP). According to the Indian Express, the government recalled the defence secretary, Shashi Kant Sharma from Malaysia; he arrived in Delhi and summoned the Director General of Military Operations (DGMO), Lt Gen AK Choudhary to a late-night meeting in his MoD office to “explain what was going on.” Later, he “was told to send the units back immediately.”
Top generals flatly deny this. “It is completely false that the defence secretary summoned the DGMO and passed orders to him to send back the units. There was no meeting between the two, nor were any units ordered to return to their locations. The units had come out for training and they left on their own after completing that training,” says a senior army headquarters officer who was privy to events.
Business Standard has learnt that the unit that had come from Hisar was 20 Mechanised Infantry Battalion, a new arrival in that station that was undergoing its initial familiarisation. The “unit” from the Agra-based 50 (Independent) Parachute Brigade was actually a mix of small Special Forces teams.
Senior serving officers are emphatic that there are no protocols or regulations that require “any military movement, at any time, in the NCR (National Capital Region) to be pre-notified to MoD,” as the Indian Express story asserts.
“Army units move every day of the week towards Delhi; into Delhi; and within Delhi. These include vehicle convoys of units going on firing or training exercises; as well as vehicle convoys of units that are moving on permanent transfer from one station to another, a journey that every combat unit makes every two or three years. These unit convoys often make administrative halts in Delhi,” says a brigadier who coordinates army movements.
The army’s greatest irritation stems from the implicit suggestion in the Indian Express story that the move of two units to Delhi could be seen as a threat to the government. “There are two full infantry brigades and an artillery brigade permanently located in Delhi. That adds up to ten fully armed units in Delhi, 365 days of the year. That is the level of mutual trust between the government and the army. Mischievous news reports like (the Indian Express story) seek to undermine this trust,” points out an army lieutenant general.
These officers also say that the permanent army garrison in Delhi was supplemented during January by thousands of troops from the contingents that come to participate in the Army Day and Republic Day parades.
The army’s public relations interface, the Army Liaison Cell, has been approached for an official response, as also the MoD’s Directorate of Public Relations (DPR). So far, there has been no response.
Posted by Broadsword at 07:06

Good, that the veracity of such reports is being openly questioned in the media. Actually there should be a 'code of conduct' among the press-houses, that any 'out-of-line' reporter should be immediately sacked for posting unverified news reports. Most of our private media channels have lost credibility by howling during newscasts. India has no credible news source such as CNN, BBC etc. Our channels lack the depth of research required to present news.

Since when has a soldier's or an officer date of birth been a personal issue? That kind of a line is amusingly intringueing from a man who had been a Colonel (of course with a date of birth)!!

In your hit piece earlier where in you had pointed out that Chief had placed Rajput Regiment officers all around Delhi, I had pointed out through my comments that you guys are slowing spreading a coup canard !

It is a terrible shame that mischief mongers publish such shitty reports in national newspapers.

I think it is a case of some bigot within the government having planted this story with the gullible and naive reporter from the Indian Express who must have been looking for his tehelka moment without any verification, as a majority of our "journalists" are prone to do. Sensationalism... but so pathetic and against national interests. Blind blind reporters.

are you guys stupid...

The whole fiasco is created so as to take away powers from army commanders to even conduct exercises. Now for even conducting such drills, the army commander will ahve to stoop to askign permission from the Babu....this will ultimately chanelise to the army commander either not being bothered to beg for permission and thus the power/excuse to punish him with the Babu or to morally degarde the commander by him having to beg for routine exercise..thus pcycologically showcasing him junior to the idotitc deranged phsyciopath babus

This express news is absolutely rubbish and seems to have been leaked at the behest of some vested interest to malign the army chief and in turn drag the army which is a strong apolitical institution into a controversy.There seems to be a strong lobby against him which repeatedly plants such stories/leak.We have seen such lobbies at work against anna hazare

Indian Media and their theories. Just immediately after Osama killing, they put up their own hypothetical plans over how India could launch a killing of if i remember right Dawood Ibrahim in Pakistan via Submarine e.t.c

What is the point of this sensationalism? It would be nice to actually point and positively highlights the achievements in DRDO cadre and other indigenous efforts which would otherwise go unnoticed.

But again.....its all about the flashy headlines....and us to whine about how nothing is being done in PSU.

Why bother commenting here as i feel many will figure out something to retort in my comments, but in short...i am just plain disgusted with this.

Its a complex scenario which needs to analyzed carefully. Media goofing up, yes. Gov rattled, yes. Army wanted to do something mischievous, May be not.

Wonder how western media has reacted to this.

Some of the retired or rather ex service generals are being made use of by the opponents of General Singh quite well. Many of them are exposing their plain stupidity and hollowness and making mockery of the status and rank of a General. Many like Hoon force you to think who made them Generals. Many others who have become professionals but are not generals like you or Maroof knowing the pitfalls of yapping on the idiot box are doing well.

Why do not you folks conduct a cadre for these retired generals or better ask them to speak very less rather than making it clear like Ahluwalia that he is sponsored.

Though the retired IAS etc like Mishra, Subhramaniam and KC are also not far behind in making themselves a laughing stock. One wonders what kind of prejudiced elites run India!

I watched your interview on IBN with Gen Shankar Prasad wherein you said that most of the Generals warm their chairs in the Army HQ !

How true, how true but why only in Army HQ. They are doing that every where and in every formation. Warming their and their bosses afts. Rest all goes to hell.

I am really at a loss to understand the motivation of people like Gen Hoon and Gen Shankar Prasad who have occupied loft posistions long ago and often talked about and held in esteem (high or not).

I think these guys have run out of money !
*
Having known you quite sufficiently, my only request to you is to caste away your AC hangover as early as possible so that the country benefits from your services. lest you remain in garages like your AC tanks...

I am amused that Lt Gen Panag has been seen as a cerebral General. He is amongst the most convoluted flag-rank officers to have risen to Army Commander rank - his persona corroded with pet peeves and idiosyncrasies that made him a Tughlaqian-terror to his chain of command in Hissar (33 Armoured Division) and Bhopal (21 Corps). Unabashedly parochial, his fetish for trim bellies and saluting was carried to bizarre extents; not to miss his cinematic projection as a Guderian strategist (just see the videos of Exercise DESERT STRIKE).

Leave Panag out as a 'cerebral' General - he was and is an attention-seeking masochist who lost his wife's affections early on in his service and managed to raise a daughter as a tomboy (she's still a tomcat today) and a son who makes up for his sister's lack of feminity. In the Army he remains known as a bully and fascist who never stood up for what was right.

...and your idea of a cerebral general is who?