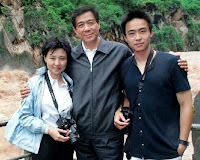 This year could end with a new president in Washington, but it will certainly see a brand new Chinese leadership. A fifth generation of Chinese leaders will take power this autumn at the 18th National Congress of the Chinese Communist Party (CCP).

China has moved beyond Mao Zedong and Deng Xiaoping; no single strongman controls all the levers of power. Instead, power is distributed between nine senior leaders who make up the Politburo Standing Committee (PSC). Watchers of Zhongnanhai (Beijing’s equivalent of the Kremlin and South Block) agree that even Hu Jintao --- China’s president and general secretary of the CCP --- is merely the “first amongst equals”. Collective leadership is now the norm; the 2007 Party Congress defined this as “a system with division of responsibilities among individual leaders in an effort to prevent arbitrary decision-making by a single top leader.”

This autumn, seven of the PSC’s nine members, including President Hu Jintao and Premier Wen Jiabao are expected to step down, having reached retirement age. The two who will continue are Xi Jinping and Li Keqiang, both in their late 50s, who were elevated to the PSC at the 16th Party Congress in 2002, when the current fourth-generation leadership was anointed. Reared thus for leadership, Xi is set to be president while Li will be China’s next premier.

How will the rest of the PSC be chosen? In theory, the 350-odd members of the CCP’s Central Committee elect 25 members to the Politburo. These then elect the 9 gentlemen of the PSC (ladies, stand aside please!), which then elects its own general secretary.

But the CCP’s internal democracy approximates that of the Indian National Congress. In what is actually a top-down process, China’s most influential leaders confabulate beforehand and allocate amongst themselves quotas in the Central Committee. They also “approve” in advance the members of the Politburo and the PSC; their decisions are later rubberstamped up the election chain. The outgoing PSC will reportedly meet this summer at the resort of Beidaihe to nominate the next Politburo, PSC and general secretary. Also influencing these decisions will be retired supremos like Jiang Zemin, Li Peng and Zhu Rongji who all back protégés to retain proxy influence and continue their favourite policies.

While nobody can accurately predict the factional bargaining and deal-making that will produce the new elite, it is clear that the next PSC will be drawn from the 204 full members of the 2007 Central Committee. After eliminating members who have retired, or will soon, the less experienced, and military leaders -- who are ineligible for the PSC -- there are just a few dozen candidates left.

A key determinant will be the faction or coalition that each candidate represents. After the growth of the last three decades, China includes the nouveau riche of the coastal regions and marginalised and disadvantaged groups from the inland provinces. The party has deftly accommodated both interests, creating the slogan “one party, two coalitions”. The “populist” coalition to which Hu Jintao and Wen Jiabao belong, are dubbed the “tuanpai”. They speak for the farmer, migrant worker and urban poor. The “elitist” coalition, headed by Wu Bangguo and Jia Qinglin, include the so-called princelings (descendents of powerful party elites) with successful careers in the economically developed industrial zones.

The CCP balances these two coalitions, marrying tuanpai expertise in rural administration, propaganda and organisation with elitist skills in economic policymaking, foreign trade and investment and banking. This accommodation is set to continue: Xi Jinping is from the elitist coalition, while Li Keqiang is from the tuanpai. Both coalitions agree on fundamentals: ensuring the survival of CCP rule; ensuring socioeconomic stability; and enhancing China’s status as a global power.

After applying all these filters, Zhongnanhai watchers like Cheng Li of the Brookings Institution believe that there are 14 favourites for the next PSC. Seven of these candidates, i.e. exactly half, are tuanpai with close ties to Hu Jintao: Li Keqiang; Li Yuanchao; Liu Yuanshan; Liu Yandong; Wang Yang; Ling Jihua; and Hu Chunhua. Two of these --- Li Yuanchao and Liu Yandong --- are also princelings. They could play crucial mediating roles if factional infighting escalates, giving them a potential power advantage.

Along with Xi Jinping and Li Keqiang, Wang Qishan and Li Yuanchao are likely to emerge as China’s top four fifth-generation leaders. Wang, a Politburo member and the party chief in Guangdong, is a bold reformist who wants more political and media freedom. Li, too, is a reformist who advocates a crackdown on corruption.

Vice-Premier Zhang Dejiang and the CCP’s propaganda chief, Liu Yuanshan have both served two terms on the Politburo and so are “entitled” to move up to the PSC. Shanghai Party Secretary Yu Zhengsheng has also served two terms, but only just makes it in the age cut-off. Given his formidable political clout, however, there is apprehension that the tuanpai might negotiate for his retirement (along with that of Liu Yandong, also born in 1945), arguing for a younger leadership.

That still leaves a couple of seats to be filled. All eyes on the Middle Kingdom!

SIR Do you have any sources
in IAF

Right Now there are reports coming
of EUROFIGHTER getting MMRCA

Sir,
Shouldn't India develop a longer range brahmos12 since restrictions have been lifted ?

Since Deng Xiaoping they have degenerated fast in to hybrid fascists and so are surprisingly running fastest on the capitalistic racecourse. They were never a democracy and are never expected to be. They do not have an iota of good feelings towards India and Vietnam.

Apart from usual business, the only good thing that India can do for them is to be prepared with MMRCA and quality/quantity nukes.

Col. Shukla -
As you know, one common thing amongst all these gentlemen, starting with Xi Jinping and Le Keqiang is that they all are quite the hardliners when it comes to India (and the United States). So, there will be much continuity in China's antagonistic Indian policies for the next 12 years. Hopefully our wisemen from across parties are taking note.

On a side note, we should send some of our Bengali and Malayalee communists there for them to see how the last bastion (forget Cuba) of Communism has made China what it is today.

India isnt a member of MTCR treaty still. The complicating factor is that NPT must be signed before MTCR.

Obama promised membership into four such regimes with a special exemption.

Even China isnt part of MTCR.

Without the constrains of a free and mostly irresponsible media towards national security, China with its communist dictatorial regime has progressed in leaps and bounds in a mostly capitalistic world.

This progress has been tremendous in the last 30 odd years and it has been brought about by young, capable and visionary leaders.

On the other hand India is languishing far behind and bogged down by political infighting between rival political factions without any regard to national security and economic progress.

The rival political parties with aging dinasaurs as leaders are only keen on holding onto power at national and state levels.

It is high time the leaders past their prime are discarded (but remembered for their contribution to nation building) and replaced with more young, dynamic, visionary leaders if India is to become a developed country not just in urban areas but also the rural agricultural areas.

India needs a charismatic leader who is above bipartisan politics and who can mould the disparate religious and ethnocentric races into a single nationality.

The Chinese though belonging to different clans and from different geographical areas stand united and form a cohesive entity when it comes to their national aspirations and security. They are go-getters who do not hesitate to do whatever is necessary to achieve their national goals.

Can we at least emulate the Chinese in deeds and progressive leadership?

Sir, having been an ardent follower of your blog I'd like to say that this article has offered the readers who usually follow technicalities & transfer of military hardware, an exceptional insight in international affairs. Though slightly dull, it is these kind of articles that are larger source of information on foreign relations and help shaping our defence needs. Thanks once again.

Why did you find it appropriate to post this particular picture (Bo's family) ?

Because it was already evident to watchers of Zhongnanhai that Bo Xilai was ruffling too many feathers with his US-style campaigning... which went against the CCP tradition of back-door confabulations rather than open confrontation.