INS Tarangini gets a sister sailship: the INS Sudarshini 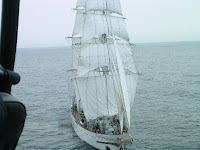 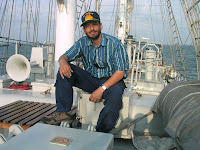 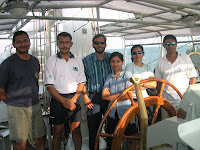 The INS Sudarshini, the navy's second training sailship for cadets, awakens memories... of the time I spent on the INS Tarangini in 2004 during its trip around the globe. Posted are 3 photos of that trip on the Tarangini (above). Three photos of the Sudarshini are pasted below those
The Indian Navy's press release on the commissioning of INS Sudarshini is pasted below:
INS SUDARSHINI JOINS SOUTHERN NAVAL COMMAND
INS Sudarshini a three masted barque (sail ship) and the second sail training ship of the Indian Navy was commissioned by Vice Admiral KN Sushil, Flag Officer Commanding in Chief Southern Naval Command at Naval Base today. INS Sudarshini is a follow on class of INS Tarangini which joined Southern Naval Command in 1997. The ship commanded by Commander P K Boyiri Varma is built by Goa Shipyard Limited and is designed by the British Naval Architect Mr Colin Mudie. INS Sudarshini with an overall length of 54 m, has 20 sails, 7.5 kms of rope and 1.5 kms of steel wire rope. She can sail for up to 20 days with its complement of 05 officers, 31 sailors with 30 cadets embarked for training. INS Sudarshini will join the First Training Squadron based at Southern Naval Command at Kochi. Interestingly, the ship was launched by Smt Letha Sushil, the spouse of Vice Admiral Sushil at Goa Shipyard on 25th January 2011.
Sail Training Ships are crucibles for future Naval Officers for training in seamanship, navigation, ship handling, and braving the elements. The inclusion of a second sail training ship will ensure the availability of either of the ships for training of cadets on a continuous basis. INS Sudarshini is expected to undertake a historic ASEAN voyage in September this year. The voyage, which would cement the historic ties of India with the countries of ASEAN region, will touch 18 ports in 8 countries and will conclude in April 2013. Southern Naval Command eschewed the traditional grandeur befitting a commissioning ceremony today, in view of the passing away of the Governor of Kerala. The ship will proceed on its first mission later today.
Posted by Broadsword at 20:35

Ready to take on the might of the Chinese navy!

When was the last time that IN launched a ship and gave it a muslim name?

Muslim is not a language, may be you meant Arabic, Einstein?

Ajai, Please watermark your images. Too many "chor" guptas on the prowl

You publish both positive and negative comments. My hats off to you on that respect!

To make this easy for you i shall do a simple illustration:

Do you know the name Aurangzeb? Do you think it is arabic?

*My* point (which I didn't bother laying out *literally* because I thought ishaaras were supposed to be sufficient with samajhdaar people) was that it is obvious that the *Indian* Navy would give names to its ships that come from a language of *Indian* origin.

Note that religion has absolutely *nothing* to do with any of this.

P.S.: I already know your next response so let me save both of us a step. 1: Aurangzeb is a word from the Farsi language, and not Urdu, and, 2: I do not differentiate between Hindi and Urdu anyway, like almost everybody else in the world (including linguists and encyclopedias).

Aurangzeb is a Persian word meaning,'suitable for the throne'cannot see anything 'Muslim'in the word itself.
What cultural, historical and other attributes are attached to words is another matter.

The Indian Navy tends to name its vessels on geographical features like places,rivers ,flora and fauna or abstract human qualities.

Well the Coast Guard has a ship named Chand Bibi and another named Habba Khatoon.

The crest of the destroyer Mysore represents the crest of Tipu Sultan if memory serves me right - "The Gala Banda" i.e. two headed Eagle.

And a base named Kunjali.

One of the most beautiful ships of the Indian Navy! I was very happy when it participated in the tall ships rally!