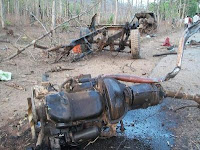 The remains of a CRPF vehicle after it was blown up by a Naxal IED, killing seven policemen. The culprit: ammonium nitrate

Besides the 24 people killed and 130 injured in this month’s Mumbai bomb blasts, this year has already witnessed another 266 Indians killed or injured in 76 explosions set off by Kashmiri, Naxal and Assamese militant groups. The Ministry of Home Affairs (MoHA) admits that most of these attacks feature easily available explosives --- like TNT, dynamite, slurry and the deadly ammonium nitrate-fuel oil mixture (ANFO) --- that were stolen by militants. Yesterday, the Home Ministry (MoHA) clamped down on the availability of ammonium nitrate, declaring it an explosive under the Explosive Act of 1884. But New Delhi bureaucrats continue to block a revolutionary new non-explosive material that would take those “old-style” explosives out of circulation.
This new, game-changing product, called Green Break Technology, does the same job as traditional explosives like ANFO: splitting open rocks, bringing down buildings and making tunnels through mountains. Unlike traditional explosives, though, Green Break Technology (or GBT) cannot be made into bombs since it cannot be detonated or exploded. That makes it useless for terrorist products like exploding suitcases, car bombs and improvised explosive devices (IEDs).
The secret of GBT’s non-lethality is that it burns relatively slowly. Conventional explosives, like TNT, dynamite and ANFO burn at 1000-3000 metres per second, producing devastating shock waves that send splinters or shrapnel flying hundreds of metres. In contrast GBT does not explode when it is ignited; instead, it reacts chemically, releasing a large amount of harmless gas. This gas rapidly builds up inside, say, a rock, exerting outward pressure and fracturing it within milliseconds. Since GBT burns far slower than explosives, there is no lethal shock wave and no splinters shooting outwards. The broken chunks of rock fall harmlessly just 5-10 metres from where the GBT cartridge is ignited. The shock wave cannot even break a windowpane, far less blow up a security force vehicle or kill patrolling jawans.
In international testing, in accordance with “UN Recommendations on the Transport of Dangerous Goods; Manual of Tests and Criteria”, GBT has been placed in “Division 1.4”, the same category as a car airbag, reserved for “Substances and articles which present no significant hazard.” This allows GBT cartridges to be safely transported even in passenger airliners, without police escort. GBT is being flown into India on Qatar Airways commercial flights for demonstrations that have been requested by Delhi Metro Rail Corporation; Defence R&D Organisation (DRDO); Border Roads Organisation; Mazagon Dock Ltd; and the Border Security Force, amongst others.
Green Break Technology Ltd, South Africa, which holds a global patent for GBT, plans to develop a global supply hub in India, from where it could export 4-6 million GBT cartridges every month. It has licensed an Indian company, Eco Breaking Technologies India Pvt Ltd (EBT India), a part of the Alchemist Group, to manufacture GBT cartridges at a factory near Alwar, Rajasthan. But the government has stymied this plan.
Last December, EBT India applied to the Dept of Industrial Policy and Promotion for an industrial licence. Within days, the DIPP asked the MoHA and the MoD for their views. But the MoHA, the key agency in approving this manufacture, has sat on this application for the last seven months.
In a telephone call with Business Standard, Utthan Kumar Bansal, the MoHA’s Special Secretary for Internal Security, flatly rejected a request for comments. “You have no locus (standi) for seeking information on this highly confidential matter”, said Bansal.
Josy Cohen, the South African chief of Green Break Technology Ltd, points out that official foot-dragging in India contrasts with the enormous interest in GBT overseas. “From the technological viewpoint, GBT is a major breakthrough, the longstanding dream of experts in infrastructure demolition; underwater applications; and even mining,” says Cohen.
According to Cohen, GBT’s greatest advantage is its eco-friendly nature. The gases produced when GBT burns are harmless nitrogen, carbon dioxide and water vapour. Since none of these are combustible, GBT is ideal for underground mines, where pockets of inflammable methane gas render conventional explosives unusable. And GBT is ideal for underwater use, since there is no shock wave that kills marine life. This gentleness remains GBT’s only drawback, since it cannot be used for heavy duty “primary blasting”.
MoHA officials admit that the lack of regulation of factories manufacturing traditional explosives like slurry and ANFO permits the diversion of large quantities of explosives from legitimate users, especially road builders. Last August, the media extensively reported that 300 tonnes of explosives, manufactured by Rajasthan Explosives and Chemicals Ltd (RECL) went missing. At the same time, there is no precedent for licensing a radically new product like GBT. Since the MoHA and the DIPP are unwilling to accept international testing results, and they remain unwilling to arrange their own testing, EBT India’s request for an industrial licence continues to languish.
[ENDS]
Types of Burning:
Burning : up to 200 metres/sec
Deflagration : 200 to 1000 metres/sec
Explosion : 1000-3000 metres/sec
Detonation : 3000 to 10000 metres/sec
Ammonium nitrate slurry has detonating velocity of 3200-3500 metres/sec.
Dynamite has 6000-7000 metres/sec.
GBT has a deflagration velocity 200-1000 metres/sec.
Posted by Broadsword at 22:17

The GBT is environmental friendly, cost effective technology, which has immense potential in infrstructure development, Mining, and other sectors. In our context, the inherent societal advantage of this substitute over existing materials which are prone to misuse by undesirable elements is likely to be beyond expectations. It is sad that such a project has to wait for months to get Industrial license.

Either there may be some adverse effects on the economy due to changeover or the product may be too good to digest.

Yawn.So mixed up facts here I am afraid. Ammonium Nitrate Fuel Oil is a IED used by nutcases like Timothy McVeihg (Oklahoma federal building bombing) or more recently the Norwegian nutcase Brevik and other assorted terrorists etc . It is a highly unstable dangerous to handle substance that no sane industrial user will use. This product you are promoting is no way going to block the home/backyard made ANFO. The MHA is right in trying to control nitrate fertilizer without which ANFO is not possible.

Yeah. Industrial users use dynamite/TNT etc, which your wonder product can substitute greatly and prevent diversion to Maoists etc.

It would be preferable if you could do some actual reporting rather than being a paid agent of Alchemist and Josy Cohen or god forbid, an unwitting unpaid agent.

Sad incident! If political will is not there, maoists cannot be destroyed.

DRDO musr be planning to do a thirty year reserch on it and then claim it to be "indegenious"...

So far MHA goons are concerned, delay is one of the methods to obtain palm greasing !

Even today, ANFO made from fertilizer and diesel is regularly used to divert dynamite sticks (which are more expensive) from legal blasting, usually for illegal fishing, but sometimes for more sinister purposes.

And contrary to what anon at 15:54 says, ANFO is highly stable, and needs a primary to explode! At least read wikipedia before mouthing off.. http://en.wikipedia.org/wiki/ANFO

Thanks for giving some detailed technical insights into the matter..

@arak, u seem to know a lot about non-explosive breaking. i wanted to set up a facility myself. can u give me some ideas...