The INS Kalpeni, which intercepted a pirate mother ship in the Arabian Sea yesterday 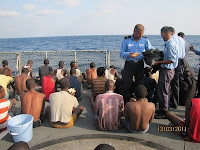 The INS Kalpeni being handed over to the Indian Navy last October in Kochi. Today, 61 pirates sit on its deck! The official account of the incident is pasted below
INDIAN NAVY NABS 61 PIRATES AND RESCUES 13 CREW NEUTRALISES PIRATE MOTHER VESSEL VEGA 5
On the night of 12th Mar 11, at about 2100 hrs INS Kalpeni intercepted a pirate mother vessel called Vega 5 in the Arabian sea about 600 nautical miles west of India. 13 crew members were resuced and 61 pirates have been nabbed.
On 11th Mar 11, a Naval Dornier while responding to a call from MV Vancouver Bridge under pirate attack, located Vega 5 a pirate mother vessel in the area. Seeing the naval aircraft, the pirates immediately aborted their piracy attempt and the mother vessel attempted to escape from the area. Whilst IN Maritime Patrol Aircraft continuously tracked the pirate mother vessel Vega 5, Indian Naval Ships Khukri ( a missile corvette) and Kalpeni (a Water Jet Fast Attack Craft) already deployed for anti piracy patrol, were diverted to intercept and investigate Vega 5.
On the night of 12 Mar 11 INS Kalpeni closed Vega 5. In the darkness, the pirate mother vessel launched two skiffs which fired at Kalpeni. INS Kalpeni responded with limited firing. Thereafter it was observed that a fire had broken out on Vega 5 (mother vessels are known to carry additional fuel drums to fuel the skiffs). Personnel were also seen jumping overboard. INS Kalpeni in conunction with INS Khukri recovered 74 personnel comprising 61 pirates and 13 members of the original crew of the fishing vessel. Preliminary investigations revealed that the pirates were carrying about 80 to 90 small arms/rifles and a few heavier weapons (likely to be RPGs).
Vega 5, a Mozambique flagged fishing vessel was hijacked on 28 Dec 10 and has thereafter been used as ‘mother vessel’ for piracy operations. This vessel had been a risk to international shipping for last four months and has carried out several attacks.
Naval ships and aircraft are presently in the area searching for any other fishermen/pirates.
South Eastern Arabian sea is a focal point of international traffic and the security of these sea lanes in the Arabian Sea is critical to the flow of global trade. In addition to the anti-piracy patrols being sustained in the Gulf of Aden since Oct 2008, in view of the dangers from vessels such as Vega 5, the Indian Navy and the Coast Guard have been maintaining vigil West of the Lakshadweep Islands in the last four months. This has proved effective and piracy incidents in this area have seen a 60% decline since December 2010.
It may be recalled that Indian Navy has already apprehended two pirate mother ships on 28 Jan and 05 Feb 11 in the Arabian Sea. A total of 43 pirates had been apprehended in these incidents. The present apprehension of 61 pirates in one incident is the most significant success against the pirates so far. The manner in which the firm and resolute actions have been taken by the Indian Navy demonstrates the nation's determination to strengthen safety of merchant shipping in the international sea lanes in the Arabian Sea with due regard to international humanitarian law, even when dealing with a group of hardened pirates.
Posted by Broadsword at 12:13

Col Shukla,
We must also look into the Al qaida and ISI angle to these piracy attempts. There is a possibility of both coming true considering it is happening so close to Indian territory - Lakshadweep.

It's heartening to see IN taking form action.

It is a commendable positive action.

BZ to the young sea warriors!!Considering the increase in the threats from the seas around us it is time to upgrade the Southern Naval Command to a full fledged operational command with focus on anti - piracy,Africa,SEZ,LAKSHADWEEP,etc..Ships,aircraft and helicopters capabilities should be enhanced under FOCINC SOUTH to combat this menace.India will need to step up manpower recruitment of officers and sailors / attractive retention schemes of existing trained manpower.The turmoil in the Arab world will test the sinews of the Navy in the near future as millions of our countrymen,women and children are residents in these countries and will need to be evacuated.Lawlessness on land will spin off to the Arabian sea too and innocent commercial passage and trade will be hit in even larger numbers.