The Tejas LCA, in display colours, rehearses for its aerobatics display at the opening of Aero India 2011 in Bengaluru today 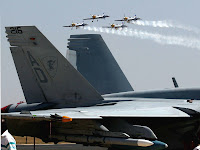 The Sitara trainer being readied by HAL for an air display at Aero India 2011. The aircraft has undergone a major fuselage reinforcement after it cracked during stress testing
The Flying Bulls, a Czech display team, rehearses the day before Aero India, framed here with the tail of a F/A-18 Super Hornet
By Ajai Shukla
Yelahanka, Bengaluru
Business Standard, 9th Feb 11
Air shows in this country have traditionally been more Russian than Indian, the skies crowded with the Indian Air Force’s fleet of Sukhoi and MiG fighters, Mil helicopters, and Antonov and Ilyushin transport aircraft. But that is changing. Aero India 2011, which will be inaugurated in Bangalore on Wednesday, will showcase a major Indian and American aeronautical presence.
As the first generation of Indian-designed and built fighters, trainers and helicopters nears the end of tortuous development processes, the country’s premier air show will include air displays from the Tejas Light Combat Aircraft (LCA); the hitherto unnamed Light Combat Helicopter (LCH); the Dhruv Advanced Light Helicopter (ALH) flown by the IAF’s renowed Sarang heli-batics team; and --- a surprise inclusion --- an aerobatics display by the Sitara Intermediate Jet Trainer (IJT).
America’s growing share of India’s aircraft market will be evident from the presence of the IAF’s recently delivered C-130J Super Hercules, the first of a billion dollar order of six of these transport aircraft. Also participating will be the KC-135 Stratotanker refueller, and the C-17 Globemaster III strategic airlifter. New Delhi is processing a US $4 billion purchase of 10 Globemasters with the US government. Rounding off the US presence will be the F/A-18 Super Hornet and F-16IN Super Viper, both of which are competing for India’s $10 billion tender for medium fighters.
One of the interest points of the show could be the IJT Sitara, designed and developed by Bangalore-based Hindustan Aeronautics Limited, to plug a major IAF shortfall of trainer jets. Four years ago, at Aero India 2007, the Sitara had careened off the runway as its canopy burst opened during its take off run, fortunately without injuring anyone. Today the Sitara is a front-runner --- given its all-Indian flavour --- for selection for the IAF’s reputed Surya Kiran aerobatics team, to replace the vintage Kiran trainers that they currently fly.
“The IJT will get Final Operational Clearance by end-2011”, HAL chief, Ashok Nayak told Business Standard. “We have already built the first three of an IAF order of 12 trainers, having successfully integrated the new Russian AL-55I engine. This aircraft is entirely HAL-designed, HAL-built, and we will do all the testing here as well.”
Business Standard has learned that the IJT has just overcome a major setback, in which the aircraft cracked into two during structural testing. In this demanding ground test, the fuselage is subjected to heavy loads to ensure that it can bear more stress than it could encounter during flight. Due to this failure, HAL lost months in strengthening the IJT’s fuselage.
“The reinforced aircraft cleared all the structural tests just a couple of weeks ago. Now it is ready for an air display during Aero India”, said Nayak.
The 8th Aero India show, organised by the MoD in partnership with the CII, will be conducted from 9th-13th Feb at the IAF’s Yelahanka air base outside Bengaluru. Anticipating some 70,000 business visitors and official delegations from 45 countries, some 380 foreign and 295 domestic exhibitors will showcase their aerospace products. The air show is also expected to have 1,75,000 visitors from the public, who can enjoy the air displays from a vastly expanded Air Display Viewing Area (ADVA).
Handily beating previous records, 93 aircraft of various types will be on display. Civil aviation will comprise 55% of the participation in Aero India 2011, including a major presence of business jet manufacturers like Gulfstream, for whom India Inc. represents a major emerging market.
But the star attraction will be the twice-daily aerobatics displays, in which the contenders for India’s medium multi-role combat aircraft (MMRCA) tender will outdo each other in impressing the spectators. The Super Hornet and the Super Viper; the Russian MiG-35; the Swedish Gripen; and the Eurofighter were on display at the last edition of Aero India two years ago. This time the French, Dassault-built Rafale fighter will make its debut in India.
Also coming to India for the first time is the Flying Bulls Aerobatics Team, a private enterprise, which has accumulated a fleet of vintage aircraft that are maintained in impeccable condition. A regular feature in international air shows, the Flying Bulls are expected to be one of the highlights of Aero India 2011.
A key enabler during the 7 previous editions of Aero India has been the Government of Karnataka, which has adopted the policy of developing the Bangalore area as the country’s premier aerospace hub. More than 900 acres near the Bengaluru International airport have been earmarked for aerospace industries.
Posted by Broadsword at 06:36

I am sure it's because I am not an aerospace engineer, but why does the LCA wing look like it's held together by cellotape?

Whats wrong with the paint on LCA?

There are tapes on LCA because it's still under flight testing..so tapes are for sensors which is common for any aircraft at this stage..