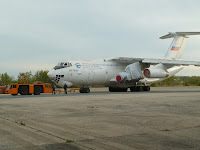 A photograph of the Flying Test Bed, an IL-76 aircraft, at the Gromov Flight Research Institute, Moscow. The Kaveri engine can be seen fitted on the inner pylon
Broadsword had first reported (read in the archives: "Kaveri jet engine finally poised for first flight", 7th Sept 09) that the DRDO's engine was preparing for flight trial evaluations in Russia. The DRDO now reports that the Kaveri's first flight has been successfully completed. The press release is reproduced below.
DRDO CONDUCTS SUCCESSFUL MAIDEN FLIGHT TEST OF KAVERI ENGINE
New Delhi: Kartika 13, 1932
November 04, 2010
The indigenously designed and developed Kaveri Engine was successfully flight tested by DRDO yesterday during the Flying Test Bed (FTB) Trials at Gromov Flight Research Institute (GFRI), Moscow, Russia. The engine was tested from take-off to landing and flew for a period of over one hour up to at an altitude of 6000m at a speed of 0.6 mach in its maiden flight. The engine control, engine performance and engine health during the flight were found to be excellent. With this test, Kaveri Engine has completed a major milestone of the development program. During the coming months further 50-60 test flights will be carried out to mature the engine in terms of reliability, safety and airworthiness. These trials would pave the way for further flight trials of Kaveri Engine with a fighter aircraft.
An existing IL-76 aircraft was modified as a Flying Test Bed for this trial, with Kaveri engine replacing one of the four engines of the aircraft. The modifications included instrumentation required for trials as well as integration of mechanical, electrical and fuel system. The engine was controlled by the pilot from the cockpit. A number of taxi trials were carried out with Kaveri Engine integrated with the aircraft, before this maiden flight. The engine data was recorded in the aircraft as well as transmitted to ground station by telemetry.
A team of 20 scientists from Gas Turbine Research Establishment, DRDO, have been working along with GFRI for these trials. Dr Prahlada, Chief Controller, R&D (Aeronautics & Services Interaction) briefed the Media about the significance of the first flight.
Kaveri engine is being developed for fighter aircraft, at Gas Turbine Research Establishment (GTRE), a DRDO laboratory based in Bangalore with the active support of several other DRDO labs, academic institutions and industry partners. During the development phase, Kaveri engine has successfully completed various stages of development including component testing, safety tests, ground based engine tests, endurance tests etc, both at GTRE as well as test facilities abroad.
Posted by Broadsword at 16:38

Good News and Happy Diwaali to All !!!

Awesome. Congrats to all the scientists

Too little too late...but still step in right direction.

I think, it means that Kaveri has passed high altitude test.

Leave your cynicism aside for a minute and answer me the following questions:

1. How many countries/companies in the world have indigenous capability to design, develop and produce a plain gas turbine, leave alone an afterburning turbofan jet engine, in house?

2. Is the relevance of this development only concerned with the LCA? Did you even think about the numerous applications of gas turbine engines across industries? And how much foreign exchange would will be spent if all these contracts are given to rolls royce and GE over the next 20 years? From ship propulsion to power plants? India doesnt even have indigenous turbines for dams yet.

3. What exactly is your background and what do you know about developing an aeroengines and the infrastructure and knowledge base required to make it? It requires the best in materials, computing, testing and manufacturing, only industrially developed countries can even think of making thier own jet engine.

4. Please read, 'The Jet Engine' by Rolls Royce and you will have changed your mind.

This is a great news! Just a quick reminder to my fellow Indians, I saw some very derogatory/demoralizing comments. Suspecting some sour Pakistanis pouring their jealousy here. Never mind them! But, first congratulations to our scientists who have given us our first Engine. Enjoy this news with some sweets and Happy Diwali to all of you out there! Yeah, no sweets for sour people from across the border.

Awesome news. Someday we will have an all-Indian fighter aircraft.

Great.
One of the best ever Diwali gift to the nation by GTRE / DRDO. India is still has a large population who live a life of poverty. Success of Kaveri aero-engine will have a major impact on our national economy. The nation must review the Kaveri program now to expedite the same. We must now install a few Kaveri engines on PV series of LCAs and start further flight testing of the engine. Safety should be assigned highest priority during such flight testing. Is it not possible to modify a IL76 aircraft available with IAF and replace one of its engines with a Kaveri engine for continuation of the testing in India. This will save money and make us self reliant. Examine if any aircraft can be suitably modified for installation of the Kaveri engines for flight testing purpose. We must examine all possibilities to expedite the induction of Kaveri engines on LCAs.
Please inform the status of the Marine Kaveri engine. More number of Marine Kaveri engines must be manufactured and put on sea trial. After-all sea trial of marine Kaveri has no risk.
I also appeal to the nation to be vigilant against sabotage to the success of the Kaveri engine program by corrupt politicians and defense officials.
P.K.Chaudhuri.

Good going GTRE. I wish they will share the technology, specifically the superalloys, with private industry.
Any chance of GTRE developing blisks for future iterations of the Kaveri?

First of all CONGRATULATIONS to GTRE&DRDO scientists.
This is crossing of a major milestone not only by Kavery but also by Indian science&technology.
For those who are skeptic about this development- even after 2050 nobody is going to give you any state of the art technology.You have to develop such techs indigenously for our country's sovereignty. You people dont understand this.The GTRE scientists definitely deserve appreciation.

What an incredible achievement! Congratulations to the GTRE and DRDO!

There is a whole thread on BR dedicated to this announcement: http://forums.bharat-rakshak.com/viewtopic.php?p=973590#p973590

@PArth :
This is an engine with Snecma core. Snecma was roped in after GTRE gave up. How does that count as inhouse development ?

Still, I would be pleased if we can manufacture this part-foreign engine indigenously without importing even a single screw.

Afterall, thats what the Chinese do. Look at their aircraft. They are jokes. Just carbon copies of jets like Mig 21, Lavi, F-16, Su-27 etc. Only area where Chinese have indigenous capability is avionics etc.

Why are people only thinking of this as an LCA engine ? Gripen, F-16, F-18 share almost the same engines. It is not like we need to develop a new engine for every aircraft. We could use this for our AMCA, future trainer aircraft, future awacs, arjun tank, frigates etc.

Snecma engines are known for their lightweight and superb performance. Just look at rafael. Its extremely light but at the same time has more range and payload than eurofighter.

+1 Parth
People forget that this is our first effort.
Look at IN, we can build any kind of ship today.
IAF and Army tech and production lines will get there . . .

Any idea how much power it produced?
Was it at full throttle?

Are you sure the engine tested on the Il 76 had a snecma core. I have heard of future joint developed kaveri engine using the snecma core but nowhere have I heard that it already uses one.

This is the original Kaveri, not the Snecma effort. That effort is still evolving.

The great thing about this test is that it has proven that all the basic technologies have been mastered. Of course these will have to be refined so that Kaveri can move up the performance curve, with lower weight. Even if this particular engine will not power the LCA, the technologies developed and the expertise gained can be used to develop lower cost Indian variants for a variety of tasks.