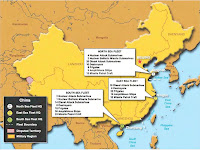 A map from the US Office of Naval Intelligence report on the People's Liberation Army (Navy), indicating the PLA(N)'s current deployment
by Ajai Shukla
Business Standard, 19th Jan 09
A mistake by a US Navy intelligence official has given the world an unexpected peek into the secret world of China’s navy. The US Office for Naval Intelligence (ONI) committed the blunder of posting, on an open website, the agency’s assessment of the state of the Chinese navy. Before the ONI could rectify this indiscretion by pulling off the report, it had been downloaded and posted on a publicly accessible website.
The 47-page report, entitled, “A modern navy with Chinese characteristics”, is still posted on the website of the Federation of American Scientists, a policy advocacy body (http://www.fas.org/irp/agency/oni/pla-navy.pdf).
The ONI report analyses the capabilities and the future direction of the People’s Liberation Army (Navy), or PLA(N). Interestingly, the ONI assessment differs substantially with the conventional view --- widely prevalent in India and the Indian Navy --- of a China racing unstoppably towards naval superpower.
The assessment notes China’s recent deployment of Task Groups --- each consisting of two warships and a replenishment vessel --- for anti-piracy operations in the Gulf of Aden. This marks the first time in over 600 years that a Chinese flotilla has operated in waters beyond China’s immediate vicinity. But the report concludes, “none of these operations indicates a desire on the part of the PRC (People’s Republic of China) to develop a constant global presence. Beijing’s ambition appears to remain focused on the East Asian region, with an ability to protect the PRC’s maritime interests in distant seas when required.
The Chinese navy last went global during the Ming rule in the early 15th century, when the great Chinese admiral Zhang He --- incidentally a eunuch --- stamped the authority of the Chinese navy across the Indian Ocean, reaching to the shores of Africa. But, in 1435, China decided to focus inwards. Around 1477, by the emperor ordered the burning of records of Zhang’s seven great voyages, from 1405-1435. Thereafter, no further naval activity was permitted in the southern seas.
This inward focus continued through Mao’s revolutionary war, which brought the communists to power. Thereafter, a coastal navy was sufficient to enforce China’s claims over most of the East and South China Seas, and the need to deter Taiwan from declaring independence. But the US Navy’s dominating presence in the Asia-Pacific and need to protect China’s supply lines convince Beijing of the need for greater naval power. China’s Defence White Paper of 2008 calls for expanding the navy’s operating range, and a greater role in international security.
The PLA(N)’s most key acquisition, says the ONI report, is a sophisticated anti-air capability, which would allow its ships to operate in “distant seas”, far from land-based air-defence systems. The Luyang I class of destroyers, already formidable, have been followed by the Luyang II class and the Jiangkai II frigates, which are linked with an air-surveillance network as good as America’s world-standard Aegis system.
Submarines, both conventional and nuclear, will be a key deterrent in the PLA(N). The ONI report says that Beijing will replace its large number of low-tech submarines with “smaller numbers of modern, high-capability boats (submarines)”. But while the number of surface ships remains constant, today’s fleet of 62 submarines will increase over the next 10-15 years to 75.
[In that time-frame, India’s submarine fleet will be about one-third that of China’s.]
Most worrisome for the US Navy’s pre-eminence in the region, is the programme to develop the world’s first Anti-Ship Ballistic Missile (ASBM), a variant of China’s Dong Feng – 21 missile. The ONI report reveals that the ASBM’s peculiar flight path, involving a mid-course trajectory correction, will make it very difficult to intercept.
Despite the addition of high-tech platforms, US intelligence estimates that much of the PLA(N) will still remain outdated 10-15 years from now. Its surface ships will remain vulnerable to air attack, while command and control systems will still be relatively undeveloped. Therefore, while the PLA(N) will be gradually expanding beyond the South China Sea, it will focus on what Beijing calls, “military operations other than war.” These include protecting its international lines of supply, humanitarian relief, and naval diplomacy.
CHINA’S NAVY TODAY
Diesel attack submarines 53
Nuclear attack submarines 6
Nuclear ballistic missile submarines 3
Destroyers 26
Frigates 48
Amphibious ships 58
Coastal patrol missile boats 80+
ROADMAP FOR THE FUTURE
Move only gradually into international waters
Underway replenishment to increase 67%
Focus on better air defence capability, including aircraft carrier
Bigger, higher-technology submarine fleet
Need for better command and control systems
Current focus on “operations other than war”
Posted by Broadsword at 07:23

Hello Mr Shukla, I see no evidence that publishing this was a mistake on the part of the US ONI. There has always been tons of information of this kind freely available.

You do understand, I hope, the difference between "freely available" information, and the same information incorporated in an official intelligence assessment?

I totally agree with Dr Roy, a lot of information is available on the internet abt the Varyag which the Chinese buoght as amusement park and now have refurfurbished it in Chinese colors for training in aircraft carrier operations.

Similarly huge amount of information is available abt their naval bases, their current armament levels, and their ship building capabilities.

Biggest example is what they are doing with F-22 mmultirole frigates for Pakistan.

However I m more concerned abt my countries naval preparedness.

What ever Shiv Aroor said abt Indian and Chinese navy on yesterdays TV program (on Headlines Today) is very correct assessment of Chinese and Indian capabilities.

Whatever Admiral Vishnu Bhagwat said abt starting a 3rd production line 4r subs or inviting pvt companies to make subs is really important. If we follow his advice I believe its enough to make India stand up to Chinese or Pakistani challenge on high seas. However I hav some queries, abt our sub strength. I have some qureies,


Q1. what abt INS Sindhukirti, it has been lying in Vizag repair yard 4r the past 5 yrs.

Q2. India has paid for 2 Akula's. INS Chakra is coming this summer, what abt the 2nd.

Lets face it Mr Roy- its not that the Americans never make mistakes- god knows -there are a couple hundred tucked through history......

Nice leak by the Yankees! I hope our deaf min Shri AK Antony does not go by this Yankee assessment and create a better prepared India navy.

Would really appreciate a comparison between the PLAN and the resources of the Indian Navy's as it stands today and in say 10 years from now, when the IAC and the Scorpene subs would be complete, not to mention the Arihant class would be fully operational.

Maybe also compare and contrast the different naval philosophies of the two forces. As in Sea-Denial VS Sea-Control etc.

This is America's assessment compared to USN. Compared to IN it might be a potent fighting force.

How I used this kind of information ten years ago during the Kargil war has been told here:

"You do understand, I hope, the difference between "freely available" information, and the same information incorporated in an official intelligence assessment?"

my response is merely that a lot of "official intelligence assessments" in the American system are done by technical agencies for Congress, and almost all of those are freely available. There have been numerous intelligence assessments by the Pentagon and other agencies of Chinese military intentions and capabilities. What POTUS receives would be a different thing.

Leaking of information through either anonymous source or, by "mistake" is part of American politics.

Some people think the proposed defense cuts in the budget does not reflect emerging threat scenarios. I think they are right.

Its a calculated leak to put up the information in larger public domain and create pressure on Pentagon to fund new program to deal with "colossal" PLAN threat.

Rememebr a few weeks back I had told u abt what should India do to counter the chinese and pakistanis by 2020. I had given some figures that India may need.

I had also said figures abt the force multipleirs,
we need atleast 18 AWACS (todays article on idrw.org says talks for 12 are on)

Atleast 24 mid air refullers to meet any eventualities. (if all goes well Indfia will have atleast 18 by 2020)

I we listen to what Admiral Vishnu Bhagwat said on Headlines Today, I think we will have 20 subs (nuke n conventional) by 2020.

Instead for bothering abt other we need to work on our own to build capacities.

This can be an American response (purposeful leak), to Chinese hacking attacks.

Interesting that we are a puny navy compared to PLAN with 8 destroyers, 11 Frigates and <10 operational submarines!

Also, China has a large number of missile boats of Type-022, I think we seriously need such boats, especially against PN. In 1971, our missile boats were effective in inflicting a lot of damage to PN ships in the Arabain sea

Back in October 2005, an article of mine surveyed three or four "US Espionage Failures":

The PDF is still available on the nmic.navy,mil website. I dont think this is a goof up.

This is a perfect Bait. Smaug the dragon is very good at fielding baits.
Now, will a smart Bilbo takes that bait or not!

Procrastinating over this is dangerous. I hope our Tony and his team gets the message.