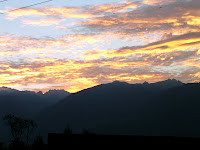 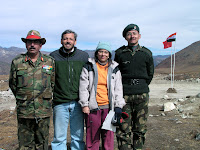 Photos: courtesy Ajai Shukla
Sunrise over Tawang, looking towards the border with China
At the Bum La pass, with the Chinese and India flags visible at the Zero Point
By Ajai Shukla
Business Standard, 14th Nov 09
The ongoing visit of Tenzin Gyatso, the 14th Dalai Lama, to the disputed Tawang region of Arunachal Pradesh has speciously played out in the media as a three-sided event between New Delhi, Beijing and the Tibetan government in exile. In fact, there's a fourth side: the people of Tawang.
On Wednesday, at a public meeting in Tawang, the cameramen jostling for photos of the Dalai Lama only needed to turn about to film the actual exemplars of this high-stakes drama: the local Monpa tribal people who --- after centuries of domination by contemptuous Tibetan officials, and now eagerly coveted by China --- have decided unambiguously that they are Indians.
Tawang, after all, only became a part of India on 6th February 1951, when a Naga officer, Major Robert Kathing, leading a platoon of Assam Rifles, was welcomed by cheering Monpas after he crossed the Sela Pass and ordered the people of Tawang to stop paying taxes to the Tibetans. Until then, Tibetan officials had controlled the Tawang tract, a huge chunk of territory protruding south towards Tezpur.
And Tawang only remained a part of India after the Chinese People’s Liberation Army, which occupied Tawang for more than a month in 1962, got an unambiguous message from the Monpas: we don’t trust you; go back to China.
And Tawang will only remain a part of India if the Monpa people remain as staunchly patriotic as they are today. On 11th April 2005, India and China signed an agreement on the “Political Parameters and Guiding Principles for the Settlement of the India-China Boundary Question”, in which Article VII stipulates that, “In reaching a boundary settlement, the two sides shall safeguard due interests of their settled populations in the border areas.”
New Delhi was initially convinced that this implied status quo on Tawang, but Beijing now insists that this does not prejudice its claim over that border area. Chinese scholars argue that the Monpas’ interests would be better safeguarded with China, and that only the Monpas could decide their future. So Monpa perceptions and opinion of India remains important for the future of Tawang.
That is why, amidst all the signalling that has attended this visit --- New Delhi’s signals to Beijing, Beijing’s signals to New Delhi, the Dalai Lama’s signals to Tibet, etc --- the most vitally important message is the one sent out by New Delhi to the Monpas. India has signalled clearly that Tawang will not be handed over to China.
Ever since India’s abandonment of this area in 1962, Tawang’s opinion-makers have doubted India’s staying power in the face of serious Chinese pressure. And New Delhi has not done itself any favours with its disregard for its image on its vulnerable frontiers.
“Take a look at the army’s temporary barracks”, says Karma Wangchu, a former IB operative and then MLA, pointing to the flimsy tin sheds in which soldiers live. “The government seems ready to pack up and leave Tawang again. If they plan to say, why do they not have permanent buildings?”
Visible from many places on the Indian side of the border are China’s well-built concrete barracks, with roads connecting many of their border outposts. The Indian Army’s ramshackle infrastructure makes a deeply unfavourable contrast.
“Why does India not come out strongly and say that Tawang will never be given to China?” asks Lhakpa Tsering, a road-building contractor who has travelled widely across India. “The Dalai Lama’s visit shows that India is learning how to defy China, but people in Tawang need to be reassured. They feel that New Delhi will barter them away in a border settlement.”
In Buddhist-predominant Tawang, where the Dalai Lama is a living God, China remains the Bad Guy, a country that persecuted the holiest of all Lamas. In that respect, Tibet’s Buddhist identity builds common cause with India. Politically, though, New Delhi and Lhasa never reached a settlement on Tawang. From 1947 until 1949, when Communist Chinese forces overran Tibet, Lhasa refused to acknowledge that Tawang was a part of India. Tibet’s historical control over Tawang underpins China’s claim today.
The Dalai Lama, himself, had long maintained a careful ambiguity about Tawang, rejecting Chinese claims over it, but never openly rejecting Tibet’s.
Posted by Broadsword at 09:00

"Chinese scholars argue that the Monpas’ interests would be better safeguarded with China, and that only the Monpas could decide their future."

If this is the case, then let's ask the Tibetans in Tibet if they want to be a part of India or China.

For example, why is Manasarovar, a holy lake to Hindus, under Chinese control? Isn't China happy to apply a historic precedent to all it's border claims? If that's the case, Manasarovar should be with India.

And lastly, if China wants to arm Indian insurgents, what's stopping us from training and arming Tibetans to go fight the PRC?

It's sad that Indians living in the mainland remember people from the North-East only when India is faced with a border crisis. If India fails to develop that region and to strengthen ties with the locals, the next generation of Monpas may change their minds and will not hesitate to declare themselves as Chinese.

I do hope we act on our promises to strengthen our defences in Tawang, so that the people of West Kameng are even more confident of their trust that the Korea Brigade will always be there for them.

If you ever have the time to write about what you think of the two additional mountain divisions for the North- East, and how effective you think they will be in deterring the dragon, I'd love to read the article.

Ajay
As usual you have provided a perspective which goes beyond the usual media frenzy and takes the more humane approach.
I am sure your stay in Arunachal would have sensitized you towards the people and their problems, which clearly comes across in this article.
Would also like to point out that not only our Govt, but the media also tends to be ignorant and insensitive of the people in NE... Only thing which everyone seems to specialize in is having an expert opinion, blaming someone or the other for all the ills, and all this while sitting in our drawing rooms with a bottle of scotch..

Thanks for actually being there and doing some great reporting...