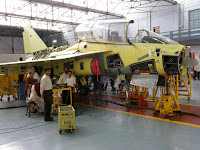 Photo: courtesy Ajai Shukla
The Tejas twin-seat trainer being assembled at HAL Bangalore some months ago. This same prototype (PV-5) has its first flight test today.
by Ajai Shukla
Bangalore
Business Standard, 26th Nov 09
On Thursday morning the first prototype twin-seater, trainer version of the Tejas Light Combat Aircraft (LCA) will taxi out to the runway in Bangalore. With its design team watching tensely from the sidelines, the two test pilots will rev up the engine, race down the runway and, if all goes according to plan, lift the twin-seat Tejas into the sky for its first ever flight.
In the cockpit will be two of the IAF’s most skilled test pilots, now a part of the National Flight Test Centre (NFTC), which handles all Tejas test flying. Air Commodore Rohit Verma, a MiG-21 ace will be the commander; behind him will be Group Captain RR Tyagi, a veteran Jaguar pilot.
Over the last few days the first twin-seat Tejas, called Prototype Version 5 (PV-5) has been carrying “high-speed taxi trials”. In these, the Tejas PV-5 has been speeding down the runway at speeds of over 200 kilometers/hour, applying the brakes just short of take-off speed. But on Thursday the pilot will not brake; keeping the throttle pressed he will pull back the joystick and make history as the trainer actually takes off.
The first flight of the twin-seat Tejas is a crucial landmark in the LCA programme. With the first squadron of the single-engine, single-seat Tejas already ordered by the IAF, and the order for the second squadron being processed, twin-seat trainers are urgently needed for training the IAF pilots who will man these two squadrons. Every IAF squadron is authorised 18 single-seat fighters and 2 twin-seat trainers.
The twin-seat Tejas is also important for the Indian Navy. The naval version of the Tejas, which will operate off aircraft carriers, will be based on the Tejas trainer; it’s higher cockpit allows the pilot a view of the carrier landing deck while descending steeply to land. In the naval Tejas there is no second cockpit; its place is taken by an extra fuel tank and some avionics.
Single-seat Tejas prototypes have completed about 1200 test flights, but the first flight of the twin-seat trainer is almost like testing a new aircraft. Though the trainer’s engine and fuselage is the same as the single-seater’s, internal systems have been extensively re-engineered to create space for a second cockpit, complete with a second set of controls, for the trainee pilot. Flight-testing will determine whether this new configuration works perfectly.
The twin-seat Tejas’ first flight comes almost 6 months later than originally planned, because the agency developing the Tejas --- the Aeronautical Development Agency --- wants to minimise the chances of a failed test. The ADA chief, PS Subramaniam, told Business Standard in Bangalore in August that caution in flight-testing was one of the drawbacks in the Tejas programme, but was understandable given that India was testing and certifying a modern fighter for the first time.
European aerospace consortium, EADS, which has been appointed consultant for the air force Tejas programme, is expected to advise on how to cut down on flight-testing without compromising safety. Reducing flight-testing by a year, believes Subramaniam, would save Rs 1000 crores in costs and bring the Tejas into operational service early.
In the absence of major hiccups, the twin-seat Tejas trainer is expected to complete testing and certification by 2014 and start being delivered to the IAF by 2015.
Posted by Broadsword at 07:04

Wonderful! Please show us some good quality pics! Thank u for ur coverage Ajaiji!

1KG sugar in your mouth. Thanks Ajai. This really lifted my spirit up. Hope everything works fine this time.

I hope it goes well. After Agni II fiasco, some good news will be morale booster. Good luck to all involved and thanks to you for sharing it.

wow.. Nice to hear that. Next in Line is LSP 3. waiting for news on that..

Ajai , Does the HAL/ADA team staffed enough to do parallel testing of multiple fighters.. I mean two LCA at the same time .

Or is it happening one at a time.

but ajai sir I hav some querries

Q1. Can these 2-seaters be ever used in wartime situation

Q2. wats powering these planes, is there a chance 2 upgrade these thhe engine with the enhanced GE414 being developed

Your reports are the best.

I will eagerly wait for more news about twin-seat Tejas on your blog.

Thanks again, Ajai. And here's wishing goodluck to the test pilots and everyone connected to the Tejas Programme.

gr8 news...hope fully everything goes on well and we also succeed in kaveri also soon

Ajai Sir,
you're in Bangalore yes? Please post some nice pics.
Thanks!

Atlast ajai... a good news... was expecting a lot to happen this year like IOC to be completed...

Looking forward to some video footage. The NLCA is going to be a good looker... :-)

Ajai, what time is the flight scheduled to happen? Is it done already? Can you please confirm how it went by? If possible, some pics too...

Thank god...good news atlast. Although it is 6 months behind schedule, the successful flght will make up for this delay.
Looking forward to see some good pics of today's flight & if possible some video footage.

Thank You Sir for sharing this news. Sometimes I wonder what would have happened to common people like us if we didn't have Broadsword.

Godspeed PV-5, the eyes of the whole nation is on you.

It is been successfully test flown.

If Navy was interested in N-LCA then why is it sending out RFIs for more aircrafts? I hope the foreign bug has not bitten the Navy.

Hope they paint the 2 seater in yellow. Looks fabulous

Well done....i am very happy to hear this. But I am unhappy, As you said, if HAL manufactured the 10 LCA and 14 Su-30 per year. It was completly disappointment. Let us give up believing the HAL,ADA and GTRE. GTRE took 25 year for developing the Fighter Aircraft Engine. They are simple wasting time and money. As the government concern way of handling the project is the problem and lack of dignity and dedication. Indian has very good innovative knowledge and creative. Government should change the policy and encourage the private sector like TATA, L&T and Reliance to manufacture the core product of Indian Air force and navy.