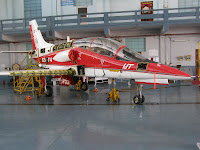 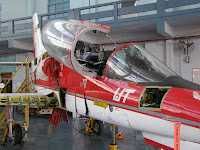 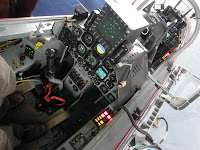 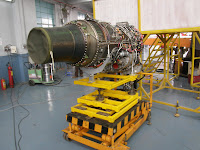 Ajai Shukla
HAL, Bangalore
Business Standard, 01 Sept 09
Not since the dark decade of the 1990s, when the Indian Air Force crashed 177 aircraft — losing 54 young pilots and some Rs 1,000 crore worth of equipment — has the air force faced such a pilot training crisis. The long-delayed Hawk trainers, which began arriving in India in 2007, have improved advanced training for IAF flyers. But the crucial introduction to flying, conducted in antiquated HPT-32 Deepak and HJT-16 Kiran aircraft, is taking a growing toll on pilots’ lives.
On July 31, after two senior flying instructors from the Air Force Academy near Hyderabad, died in a crash, the IAF halted all “Stage-1” training, which is done on Deepaks. Chronically prone to engine failure (100 engine emergencies reported in recent years), 10 Deepak trainers have crashed this last decade. A recent CAG report has slammed the aircraft as “technologically outdated and beset by flight safety hazards”.
But “Stage-2” training, which is done on the HJT-16 Kiran trainer, is an even grimmer story: 13 crashes over the last decade have taken a deadly toll on pilots’ lives.
Now Bangalore-based Hindustan Aeronautics Ltd (HAL) has stepped into the breach, renewing an offer to develop a modern replacement for the Deepak. Ashok Nayak, chairman of HAL, told Business Standard: “Two years ago, we offered the IAF a replacement for the Deepak. This single-engine aircraft, which we call the Hindustan Turbo Trainer — 40 (HTT-40), can be delivered within six years.”
But a flustered IAF, short of pilots and keen to recommence training, is demanding immediate purchase of Stage-1 trainers from the global market. The Ministry of Defence is evaluating whether the IAF’s immediate requirement can be bought off-the-shelf, while HAL goes ahead with a programme to design and build the HTT-40. A total of 200 basic trainers is the estimated requirement.
The last purchase of trainer aircraft, the BAE Systems Hawk, took 18 years to materialise.
HAL executives are confident that the HTT-40 can be delivered in six years. They point to the success of HAL’s ongoing project to develop and build an Intermediate Jet Trainer (IJT), which will replace the Kiran as a Stage-2 trainer. Powered by a custom-designed AL-55I engine from Russia, the first Sitara trainer from the production line is scheduled to fly next week.
Says the HAL chairman: “The IJT project has demonstrated HAL’s capability to design, build and deliver trainer aircraft on time. We will deliver the IAF’s current order of 12 IJTs by the end of next year.”
If the HTT-40 enters service as a Stage-1 trainer, the entire spectrum of fighter training for IAF pilots will be conducted on HAL-built aircraft. After Stage-1 training on the HTT-40, Stage-2 will be conducted on the Sitara IJT; Stage-3 training will be done on the Hawk advanced jet trainer, now being produced in HAL Bangalore, under Transfer of Technology from BAE Systems, UK.
Meanwhile, HAL is pushing the concept of Phase-4 training on a supersonic fighter: it’s newly-developed twin-seater Light Combat Aircraft. So far, the IAF hasn’t bought the idea.
Posted by Broadsword at 06:30

Atleast a small number say about 50 basic trainer need to be purchased immediately from overseas market within months. HAL can start developing the HTT-40 in parallel to the procurement process.

Ajai,
Can you do some bashing on the Kaveri engine issue ?, the folks at DRDO have slacked out a huge sum of money.

We need some tough reporting to puts things in perspective, it would be great if we could expect some vitriolic uncompromising analysis of the Indian defense scene.

Nice article. It is so disturbing to notice that decision making process in our DPSU is so slow that nothing concrete ever gets decided. Once it is decided then the execution process is again slow. Everything has to be done with L1 buying process. There are no systems to even do a design and manufacturing concurrently forget the systematic MRO plans.
They have to have systems to leverage the knowledge generated from the pas experience. This has been always residing in the heads of the great people who have retired and are retiring. Where do we go from here I do not know. Learning from global aircraft manufacturers experience must happen and not just in the name of indigenous development we keep repeating the same mistakes what they did. They must understand that they are playing with human lives and taxpayers money!... JSF

Seems IAF guys are obsessed with VIDESHI MAAL.Everything with the tag MADE IN INDIA is rejected in no time.Why can't they follow navy??I can understand their problems of non-delivery on time etc etc......but issuing tenders for PHOREN MAAAl will do no good either.It will take CENTURIES to materialize and after that the great INDIAN TAMASHA will begin.
NO wonder China is feeling the heat.

1] Are they short on funds?
2] Do they just need more time? Babies take 9 months to develop. It doesn't matter how many mothers you add to the process.
3] Is it the fault of management not being able to estimate correctly, unable to check feature creep, or inability to prioritize projects?

Nobody tells us what the problem is! If we don't get truthful answers, people will start assuming, in anger.

I think the answer for the current failures is number 3. Gross management f up.

Are these pictures new?
What is the current condition of prototype 2 after the crash landing (belley landing) on February 4 2009 ?

HAL clearly has too much on its plate. they should concentrate of the LCA and LCH. there's also the IJT and the MTA in future.

IAF/MOD should ask a pvt manufacturer to simply license manufacture some proper trainer.

The exhaust on picture 1 still looks like the Larzac engine exhaust isn't it.

Good to know the modified plane to resume flights soon.

What's the update on the LCH?

Thank you for the report

even the UK license manufactures the tucano for RAF

This prototype continues with the Larzac engine. The second prototype, which crashed in Aero India, was repaired and fitted with the first AL-55I.

And, of course, the two production IJTs (one of which will fly this fortnight) and all subsequent IJTs will be powered by the IL-55I.

Report coming up on the Kaveri engine.

Ajaiji, any report on the Tejas that gives updates ? no news has come from that front for a long time and no new pictures either..would love to see the two-seater and the LSP-2 as well, if you took it. Thanks !

the build quality of the IJT Sitara is very good ! if you've seen older generation fighters from up close, you'd know what I'm talking about.

We have no time to argue over Indian vs Foreign. The India Airforce ( thanks to all concerned ) is now in a middle of a solid block obsolescence and offers from HAL etc should not be heard at all . This is nothing but an eyewash as they do not have the werewithal to put up a competent product and the term deadline does not mean anyting to them.


The Govt. should immediately designate an Airforce team to select the best the market has to offer quickly and immediately purchase a minimum of 40 trainers plus infrastructure. In my opinion HAL should not be involved - instead the foreign company should be given an SEZ type of inducement to set up facilities in India ,if possible a JV with an Indian co-manufacturer and commence assembly and manufacturing in 18 months.

An ab initio trainer like HPT 32 are very cheap. E.g. Diamond D20 of US airforce costs around 300k each. IAF can fulfill its requirement for only around $150 million by purchasing off the shelf equipment. HAL should focus on projects already on their platter.

Another of HAL's disastrous schemes the HTT-40. While it may or may not materialise as a safe flying machine, this offer must DEFINITELY not be used to hold the IAF hostage. This is a desperate situation that calls for desperate measures. The IAF should go for an off the shelf purchase. I hope the govt realises the enormity of the situation.

What baffles me is the utter lack of the armed services to strategically plan for equipment!

Except for the IN, the IA and IAF are constantly in the headlines with knee-jerk procurement plans... shows a complete lack of leadership on the IA & IAF part to be able to negotiate with the babu's and the corrupt politicians.

Every large purchase is political... If our armed forces heads don't have the cunning to devise strategies to navigate Indian politicians what confidence can we possibly have in them going up against China or other crafty non-state actors.

The fact that Pakistan, has been a constant thorn in our side shows a complete lack of a strategic response from our security and defence apparatus.

Blaming politicions or defence acquisition policies after all these years is very lame excuse!

Long-run we need to indigenise.... what is the IA's and IAF's plan?

The IN has a plan... maybe the fat IA/IAF heads better wisen up fast and learn from the IN!!

Let them use limited number of Hansa for basic training before HTT-40 arrives.

To hell with HAL's offer. Thanks to them being short-sighted and laggard the HPT-32's replacement has materialised only now.

I agree that IAF should look abroad for this requirement. Developing a turboprop trainer is no major technological leap. There is no need to start a six-year long(probably closer to a decade given HAL's track record) development program just for the sake of having an indigenous plane when so many comparable options are available cheaply and off-the-shelf.

In fact, given the urgency of the IAF's requirements it would be downright criminal to endanger our pilots' lives for another 6-10 years just to give HAL yet another project.

Either buy or license-build 200-300 trainers ASAP. What if it's videshi? It's not HAL employees or anonymous commenter's lives at stake here.

If IAF dont want this trainer, DRDO beter market and sell this beauty to the airforces of other nations which ar ein need and make some money for future developments.