An interesting article on the F-22 Raptor 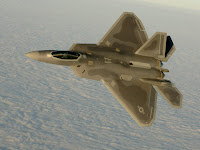 This article is from today's Washington Post... a well-rounded study of all the issues and problems surrounding the development of a new fighter aircraft. I'm sure fans of the LCA will have lessons to draw from this. See below:
Premier U.S. Fighter Jet Has Major Shortcomings
F-22's Maintenance Demands Growing

Hi,
I am new here.Like your blog

Its time that F22 is phased/ out/stop production to make way for F 35 JSF if all the short comings have been fixed from F22.

In response to Tejaswy post.
Just because u have some teething problems one cannot just phase out F-22. All the problems mentioned in here are cosmetic, as in dealing with the stealth aspects of the plane, be it canopy,which is made invisible to radar or be it the skin coatings. They are the only trouble spots for the plane and nothing else.
Give some time for the engineers to fix the problems, they will do it.

I know the compounds used for the F-22 stealth.Every electromagnetic engineer with a good enough chemical engineering knowledge can figure out the radar absorbent and reflecting materials.

there are usually two different types of compounds to do the job.
the most basic ones are the one that we see and use in a every day basis.but the unfortunate thing is that no one does really realises that these provide radar stealth. and as per what LM is facing today there are mostly ineffective if met with molecular compounds like water,alcohol,and some other amino-acidic natured ones.

the other type of compounds use a clading of different material over the above mentioned compounds.there by overcoming the few shortages mentioned earlier.Probably LM might have tried the secondary but failed to keep the clading tight over the core of primary.hence they went along with core compound without knowing the risks involved.

you will see the secondary in the indian version of MCA. cheers...

hi ajai,
thanx 4 the F22 post.
i was wondering if u gonna cover the historic launch of ATV on 26th jul or 15th aug @ Vizag.
hope 2 read your report soon.
thanx.luv ur work!
madhur

Anonymous 09:30... thanks for that post. It is enormously informative.
Let's have more such!
thanks

How do you know the "compounds" used on the F-22 Raptor? That's kinda hard to believe.

Do u think that Indians are that dumb and dont know anything?

we excel in some pretty high end technologies where no other nation on this blue planet didnt even dreamt about.

Give us the needed funding and the required go ahead to start what ever research project we opt for.
We will be technology leaders in no time,even considering the bottle necks.

Coming to the point,

me and my friends knew the same technology 12 years back.we donot have any proper platform to put it on.neither we dont have any funds.So instead of spending time on this older technology which you term as a modern one,we got our hands busy on the next gen+ invincible stealth.It means so far on earth there is no compound or material that can beat bonding of our gen+ stealth.And to add munch for the vodka you are drinking ,add the suffix cost effective and maintainance less.

I am pretty much sure,all you guys here will be freaking out after exactly 4 years from now.once the prototype and pre-production model of our unlimited endurance and non-destructible,all terrain,self reliant,laser gun battle support commando vehicle rolls out.

To anonymous at 21:57 -Have you get any offer from ADA for making stealth skin of forthcoming MCA?

I am pretty much sure that our Anonymous friend is definitely from some Govt. Agency.

@Anonymous
Do you have any links to confirm what you are saying ? or any further reading on India's development on these latest technologies. I'd love to read on them.

Sorry about not commenting on very good coverage by Ajai Shukla.

Excellent coverage and after a hell lot of reading about the worlds best Aircraft I came know even world's best is not the best why we guys always blame our indigenous effort LCA and Kaveri (even if it is a failure to meant for what it was started) but still it is great success for us that we have a start and moreover it's positive. Our LCA is about get IOC and look what Kaveri has produced: Kaveri Marine Gas Turbine. I'm pretty sure India soon will develop it's own engine too.

dudes this slogan of jai ho is really nausiating..for god sake realise that slum dog millionaire is a BRITISH Film made on the povety and slums of india..something the west like looking and pitying at..the 8 oscars are British oscars, not India!

anonymous at 21:57 13 july is talking about hsdtv{avatar} with laser pod mounted on it to destroy the curise missile....long endurance by taking in oxygen in as fuel.... it has speed-mach 8>... it has aerospace command if all goes well with the launch of satellite in 2010..
lets cheer india
jai ho!!!

Unfortunately it is true that "slum dog millionaire is a BRITISH Film made on the povety and slums of india..something the west like looking and pitying at..the 8 oscars are British oscars, not India!"

But it is true that we are still living in poverty (to hell with anyone's pitty) and yes still JaiHo! because it is not for the truly shown our poverty in some movie....it is because for the pride of India and no matter what I proud to be an Indian and JaiHo!!! to our success and our positive vision of the future...JaiHo! to India a Million times.