6 months after 26/11, modernisation of police stalled by PSU infighting

Right: An internet image of the SAR-21 carbine
Left: An internet image of a Singapore Navy team carrying SAR-21 rifles
by Ajai Shukla
Business Standard
26th May 2009
Exactly six months ago, on what has come to be known as 26/11, Indian security men in Mumbai, clutching antiquated rifles, fled shamefully before a handful of well-armed terrorists. Now, documents available with Business Standard reveal that if a similar attack were to take place today, much the same might happen. The reason: infighting within the government has scuttled the Ministry of Home Affairs’ bid to equip its police with modern weaponry.
For six years, India’s central police organisations (CPOs), which include the CRPF, the BSF and the CISF, have urged the home ministry to equip them with carbines to replace their cumbersome military-use rifles. CPO jawans presently carry the INSAS, and even World War II era .303 rifles, which are no match for the terrorists’ AK-47 and AK-56 assault rifles. Carbines, in contrast, are lighter, smaller, and can spray bullets at a target, better equipping a policeman for encounters in confined and built-up areas.
Just five days before 26/11 — in a telling coincidence — NSG commandos completed trials on two carbines offered to the home ministry by the Ordnance Factories Board (OFB). One of them, the OFB-developed AMOGH, was rejected outright. The other carbine, the SAR-21 MMS, jointly offered by the OFB and Singapore Technologies Kinetic (STK), was found suitable by the NSG for India’s needs.
The stage seemed set for an immediate purchase. The home ministry's five-year modernisation plan urgently sought 47,286 carbines for the CPOs by March 2008. This deadline was extended till March 2010 because OFB-developed carbines failed repeatedly to pass user trials.
The OFB was ready to deliver the first carbines within six months of an order, and complete delivery of all 47,286 carbines by February 2011. STK pledged to transfer technology in full, thereby allowing the OFB’s new factory (coming up at Korwar in the Amethi parliamentary constituency) to manufacture lakhs of carbines for the CPOs in subsequent five-year plans.
The army, too, is separately purchasing several lakhs of carbines.
Had the home ministry placed the order, the first OFB-STK carbines would have been entering service now. Instead, the process was derailed by a mysterious red herring. The home ministry informed the OFB (in letter No IV-13018/8/2009-Prov.II dated 17 March 2009) that a foreign vendor, Israel Military Industries (IMI), had written in, alleging bias in the carbine procurement.
As if on cue, controversial Samajwadi Party MP Hari Kewal Prasad (in 2007, he had alleged being offered Rs 10,000 to vote for Pratibha Patil in the presidential election) wrote to the home minister, making the same argument in very similar words.
It quickly became evident that this was an attempt to scuttle the carbine purchase. On March 26, IMI’s Marketing Director to India, Bran Sela, wrote to the home minister, clarifying that the letter had not been sent by IMI. The letter also pointed out that IMI was no longer producing small arms like carbines; its small arms division had been sold to a private Israeli company, Israeli Weapons Industries (IWI).
IWI’s stakes in the carbine deal quickly became obvious. In early March, just days after the fake letter, government-owned Bharat Earth Movers Limited (BEML) threw its hat in the ring, informing the ministry of defence that it would import, market and manufacture IWI weaponry for the Indian market. BEML’s Chairman and Managing Director V R S Natarajan wrote personally to the home ministry (letter No CMD/606/1923 dated 20th April 09) asking for the tendering to begin, so that the BEML-IWI carbine could be offered.
Exactly six months after 26/11, the purchase of carbines is at a standstill, while two defence ministry production units — the OFB and BEML — compete for the order. And defence ministry sources said any decision on this issue is most unlikely after the arrest on May 19 of the recently-retired OFB Chairman Sudipta Ghosh on corruption charges.
Posted by Broadsword at 07:41 43 comments: 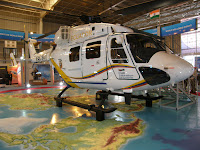 (Photo: courtesy Ajai Shukla)
The VIP-kitted Dhruv helicopter that is now being used by the President of Ecuador
by Ajai Shukla
Business Standard, 23rd May 09
The prospects for India’s most promising defence export — the Dhruv Advanced Light Helicopter (ALH) — have just been dealt an unexpected blow. India’s Ministry of External Affairs (MEA) has turned down a Bolivian request for a line of credit to buy seven Dhruvs from Bangalore-based manufacturer Hindustan Aeronautics Limited (HAL).
Senior officials in India’s Ministry of Defence (MoD) are livid. India’s defence exports languish at about Rs 300-400 crore per year, barely 1 per cent of the Rs 30,000 crore spent annually on importing weaponry. The export of seven Dhruvs, each worth Rs 44 crore, would have effectively doubled defence exports.
MoD sources said the MEA turned down Bolivia’s request for a line of credit on the grounds that it was for military equipment. The MEA has not responded to an emailed questionnaire from Business Standard on the subject.
Dhruv ALHs, in fact, have civilian as well as military uses. Of five Dhruvs delivered to Ecuador this year, one was kitted out as a VIP transport for the Ecuadorian president. India has also supplied Dhruvs to Nepal and to Mauritius on easy credit, even as gifts.
Says a senior MoD official, “Frankly speaking, I was surprised by the MEA’s decision. I can only surmise that this decision was taken by someone at the lower level, without realising the implications on India’s defence exports.”
Bolivia barely registers on the MEA’s radar. That country does not have an embassy in New Delhi; an Honorary Consul represents India in La Paz, Bolivia’s capital.
But for the MoD, the sale of Dhruvs to Bolivia would be a vital step in cracking America’s domination of the South American helicopter market, which HAL was targeting aggressively. As more Dhruv ALHs flew in South American skies, HAL planned to set up major support infrastructure to pull in even more customers.
Five years ago, with the Chilean Air Force poised to buy the cheap and rugged Dhruv, Washington’s pressure allegedly forced Santiago to opt for US-made Bell helicopters. HAL bounced back by selling Ecuador five Dhruvs in 2008; Ecuador is reportedly considering a follow-up order. Chile, too, continues to watch with interest.
HAL’s Chairman and Managing Director, Ashok Nayak, refuses to talk about the MEA’s decision, but points out that HAL’s growing presence in South America will inevitably bring in more customers from that region.
Nayak explains, “We have already delivered the five Dhruv helicopters ordered by Ecuador. Our pilots are training the Ecuadorian Air Force; we have posted 15 HAL maintenance personnel in Ecuador for backup support, along with a substantial inventory of spares. We are steadily gaining experience in supporting the operations of Dhruv ALHs in South America. That is bound to pay off soon.
Helicopters are a vital part of the Bolivian Air Force, since anti-drug operations are its main focus. Without a single fixed-wing fighter aircraft, the Bolivian Air Force currently relies on the venerable American UH-1H Huey helicopter, which is approaching the end of its service life. With the Dhruv providing a state-of-the-art alternative at a price 25 per cent cheaper than its alternatives, Bolivia remains a potential buyer.
Posted by Broadsword at 07:15 23 comments: