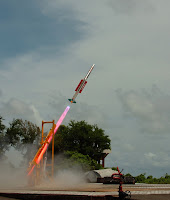 now WAIT A MINUTE... this is an air-to-air missile, when the hell are they going to test it air-to-air?

I dont understand what they are trying to prove with these ground tests. Almost 80% of the testing would be wrto attaching this to an airframe, how smoothly it gets released, impact of the plume on the aircraft intakes, how it chases and destroys an actual target, and most importantly how it performs at designed altitudes and ranges...

Can someone explain what was so successful about this test? was an actual target destroyed? how close are ground environments to actual release from aircrafts? As I remember it, this test was supposed to be from an Su30

I second that, anon

There was supposedly no "actual" target.
The target information was "virtual"..fed through secure-data-links to mission computer on the missile..i.e. mid-course updates..guidance if u will..
Ground trials suggests therefore..that program is nowhere near to mating to platforms like MKI or mirage..3-4 years more may be..

The whining of the Net Nabobs never stops.

Don't worry your highnesses, the DRDO is striving hard to meet your high standards and secure your approval.

As I am relatively new to A2A missile development, could somebody please spell out the significance of this test in the overall development of the missile?

Many thanks in advance!

ankur, to understand the significance of this test, you have to first know the type of missile astra is and its guidance system.

astra is a active radar homing or ARH a2a missile. that means it carries in its nose an active radiowave seeker which is nothing but a small radar.

however, these radars being small have ranges of less than 15-20 km against fighter sized targets but as we all know, the missiles have ranges around 80km to more than 100 km.
so how would you guide the missile to its target ?
this is what happens :
the fighter with the missile detects a hostile aircraft at 90km(say) in the frontal aspect, moving towards it. but it's missile's seeker, with a range of 10km can't lock on the target.
to take care of such situations, modern a2a missiles have something called "mid-course guidance" using secure datalinks from the mother aircraft to guide the missile on it's way to a virtual engagement box where if it switches on its on board seeker, it can "see" the target and then hit it.
this aspect is one of the most important pieces of the astra validated in the recent test, witness the reference to "two virtual targets" in the hindu article.
and then there is the validation of the on-board computer to use those datalink updates to compute optimum engagement trajectory, the navigational system to correctly estimate the missiles own position and not to mention the all important aerodynamics and propellants.

let me mention that the astra's propellant is state-of-the-art, witness the colourless and smokeless exhaust just out of the nozzle, confirming the propellant achieves near 100% burn rate.

incidentally, this ground test would cover at least part of one of astra's operational profiles, that against low flying cruise missiles.

BTW is that picture genuine ?

Eh, why do you think it is not genuine ?

THIS IS WHY IAF,IA,IN DO NOT BELIEVE
IN DRDO BECAUSE WHEN THIS MISSILE IS AVAILABLE IT WILL BE OUTCLASSED BY OTHER ADVANCED MISSILES.

JUST LIKE OUR BALLISTIC MISSILE PROGRAM LOOK AT AGNI 3 IT IS STILL NOT READY YET.

abbey ALL CAPS IDIOT,
fc-1 is about as advanced as a souped up mig-21, no wonder they did that quickly.
dear paki, if you think posting in ALL CAPS makes your claim any stronger, you are just an IDIOT, an "ALL CAPS IDIOT" !

you don't know what IA IAF etc believe in, so stop shouting.

THIS IS WHY YOUR PARENT DON'T LOVE YOU BECAUSE WHEN YOU WILL GROW UP YOU WILL BE A GOOD FOR NOTHING BLABBERING IDIOT, JUST LIKE THE ONE YOU ARE NOW !
GROW UP PAKI !

just realized that the link is not working.
http://www.defenseindustrydaily.com/images/ORD_AIM-120_AMRAAM_Launch_F-15C_lg.jpg

sorry, please use this one :
http://tinyurl.com/58hrcc

fighterclass: thanks! That clears a lot up. Could you possibly put this into context with the overall development of the missile - i.e. what percentage of the missile development/validation is done and what comes next (and a tentative operational date)?

P.S. Was impressed by the clean burn on first viewing, but the explanation helps me appreciate it more! Great job by the engineers.

ankur, it is difficult to put a number on the completion of the project. frequently, the last 5-10% of a project, performance-wise takes up more than 20-30% of the time and effort. kaveri is a perfect example.

the basic parts of the missile has been validated, like the datalinks, navigational instruments, on-board computer, auto-pilot software, telemetry and of course the propulsion and aerodynamic structure.let me also mention that the above mentioned sensitive instruments require to be extremely rugged since astra is supposed to be able to withstand up to 40 G-FORCES ! high g maneuvers are necessary so that the target aircraft is not able to turn tighter and avoid the missile. note that fighters are designed to withstand only 9g's which is the human limit.

important parts that remain to be tested are :
#seeker performance at the estimated ranges, resistance to jamming and preferably an ability to home on the jammer itself, which would make it among the best in the world. do ask if you didn't understand the last part.

# the whole aerodynamic envelope will be expanded gradually to the limit of 40 g's.

and I almost forgot the warhead and the laser fuse itself !
if all goes well, expect a date of late 2012.

fighterclass thanks for the explanation. could you also explain the capabilities of the 'Astra' in terms of similar missile in its class and more importantly 'Astra' in relation to its competitors.

4 those people who are commenting abt the ground test------- go anf fcuk urslef u SOB`s.

Just know the heirarchy of testing an AAM. and its process in validating all the flight and mission parameters.

During the test, first the rocket motors have to be tested on ground and the thrust parameters have to be validated.

then the rocket motors along with airframe have to be tested to validate other parameters whether the airframe can bear the pre-tested rocket motor and the shocks.

Then the installation of guidance and control systems takes place.

and they let the missile hit the simulated target and validate all the mission parameters.

IF the DRDO people are suckers as like u,then they would have gone through the flight testing directly on MKI.

But fortunately they are pretty smart and you ass minded people not knowing the procedures will come online like this and fart despite of knowing facts.

As the ground launch ended up sucessfully and the rocket motors showing clear fuel burn out the next step will be a launch from an aircraft which is a matter of time .

anon, the basic thrust and control surfaces were probably validated in last year's test itself.
this one was a much more complex test, checking the robustness and reliability of the datalink, INS and the auto-pilot software.

fighterclass thanks for the explanation. could you also explain the capabilities of the 'Astra' in terms of similar missile in its class and more importantly 'Astra' in relation to its competitors.
____________________________________
hey, I may post a more detailed analysis later.
for the moment, let's just say that astra is right up there with the amraam D version and r-77.
a future ramjet version may rival even the meteor, which is about the most advanced medium to long range A2A missile in development.


In comparison to the present day BVRAAM`s,ASTRA is on par with the latest ones like AIM-120D and its predecessors along with Adders.

With a maximum speed of Mach 4+ and its high g capability and the same western seekers will make it highly lethal.

No matter wot? enemy will be a toast despite the high counter measures usage.And ASTRA can overcome all of them .ITs perfect mid-course as well as INS will make it highly agile.

Despite all these and its capabilities one has to praise DRDO for getting into the development of an BVRAAM with out any prior experience .So far we didnt even made the fins for an small range AAM and directly going for BVRAAM is highly incredible.

And all these fcukers come along bashing DRDO no matter wot the product they develop and how comparative it is to present day ones world wide without any prior experience.


For sure ,expect the nest BVRAAM from DRDO to be a ramjet version.As they have mastered the ramjet tech with akash SAM it can be even used as an AAM.

As its nothing new that even the AAM can be used as SAM`s and vice versa.

But the present mach 2.5 for akash makes it unsuitable as AAM.

So a version of the same ramjet with high speeds is on envil.

What would be the difference in range between the solid propellant ones and the ramjet designs? what is the timeline around these mk1, mk2,mk3, if we can call it that..

It would be great if astra can be converted to a SAM (like AIMs). With a lighter missile, we can design vehicles to carry more of them!

who knows, DRDO may even think of a hypersonic AAM using the work already being done on that project !
that would literally re-write the rules of the game, like brahmos did !

it won't be too maneuverable but time to target and kill probability would just sky rocket !
JMT.

we need one fleet of mig31 so as to neutralize paki and chinese awaca,tankers,orions

we also need two sunny deols for china and pakistan and one mithun da for BD.