A CRPF manned by soldiers: should army soldiers be sidestepped to paramilitary forces after 7 years of soldiering? 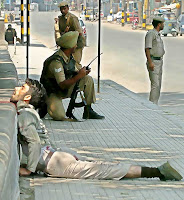 (photo: CRPF troopers in Srinagar, J&K, after shooting an alleged militant. The towns and cities in J&K are now almost entirely held by the CRPF, along with the J&K police)
by Ajai Shukla
Business Standard: 6th May 08

Officers constitute less than 5% of the defence services, but the military’s objections to the 6th Pay Commission recommendations appear to centre largely on the concerns of officers, particularly issues of status parity with their IAS counterparts. But the crucial military manpower issues actually revolve around the 16 lakh soldiers, sailors and airmen who are grouped under the somewhat dehumanizing acronym of PBOR (persons below officer rank).
This year, India has budgeted over Rs 22,000 crores for salaries for its fighting men and women. How much the pay commission will add to this figure is still unclear. In addition, defence pensions will absorb more than Rs 15,500 crores. But the big manpower question --- can India be defended by fewer people --- remains a hot potato. If thought has been given to personnel issues, it is on two other issues: reducing the pension bill, and keeping the fighting forces young.
The military’s plan for meeting both these objectives involves enrolling jawans for shorter service periods, after which they would transfer laterally to other government forces who would benefit from an inflow of trained and disciplined manpower. The 5th and the 6th Pay Commissions have recommended that India’s plethora of central police organisations (CPOs) --- which include the Central Reserve Police Force (CRPF), the Border Security Force (BSF), the Central Industrial Security Force (CISF), the Indo-Tibet Border Police (ITBP) and others --- take in large numbers of soldiers who have finished 7 years in uniform.
There are huge financial benefits to such a policy. The CPOs and civil defence organisations, numbering some 750,000 men and women, spend Rs 100 crores each year just on recruiting and training. Taking in the 50,000 trained jawans who retire from the military every year would save this amount. Even larger savings would accrue in the defence pensions bill. Instead of receiving pension from the age of 37 onwards (the average age of retirement after 17 years in the military), the jawans would serve for at least another 13 years in the CPOs. That would save the exchequer Rs 700 crores each year, growing cumulatively for 13 years. At the end of that period, pension savings would be Rs 9100 crores annually. The military would also save the money it spends on resettlement schemes and courses.
A leavening of trained and battle-hardened soldiers would enormously boost the capabilities of the CPOs, which appear depressingly weak in the face of a growing extremist threat from J&K, the naxals, and from the north-eastern militant groups. Pakistan, in contrast, has long used ex-servicemen as the backbone of its armed police forces (the Rangers, Scouts and the Frontier Constabulary), which function far more effectively than our CPOs.
But every sensible idea has at least one government agency opposing it. The 29th report of Parliament’s Standing Committee on Defence points out that the Ministry of Home Affairs (MoHA) is resolutely blocking the 5th Pay Commission’s sensible suggestion for the CPOs and the military to jointly recruit soldiers who would serve 7 years in the military and then sidestep into the CPOs. The MoHA’s arguments against this proposal make little sense and add credence to the belief that the CPOs are simply safeguarding the financial windfalls and networks of patronage that are associated with recruitment.
The Standing Committee has comprehensively rebutted each of the MoHA’s objections. The first of North Block’s objections is that soldiers who have already served 7 years in the military would make the CPOs older and greyer. Not so, says the Standing Committee; the average soldier is recruited at 19 years and would be only 26 years old when he finishes 7 years of military service. Since the current age cut-off for recruitment into CPOs happens to be 26 years, the soldiers would not just make the cut-off, but also come fully trained.
The MoHA then protested that soldiers are trained killers, used to employing excessive force, whereas the CPOs must function with a softer touch. The Standing Committee dismissed that objection too, pointing out that soldiers are extensively employed in counter-insurgency operations, and have conclusively demonstrated the restraint that such situations involve. Members of the Standing Committee snort that “CPO restraint” seems to occur most frequently when face-to-face with naxals and militants.
The next objection from the Home Ministry was that military personnel would bring 7 years of seniority with them, which would provide them an advantage over direct recruits into the CPOs. Admitting that ex-soldiers would bring their service seniority with them, the Standing Committee noted that direct inductees would be protected, both in salary as well as in promotion vacancies. In any case, the situation would be temporary; eventually all CPO recruits would come through the defence forces.
The CPOs are being shortsighted in getting the MoHA to stonewall a scheme that will greatly improve their manpower pool, and therefore their image and reputation. As the army withdraws from internal security duties in J&K, and as political will grows to confront growing naxal extremism, CPOs will be called upon to handle increasingly challenging duties. Manning central police forces with ex-military jawans would make them qualitatively superior and save money all around. It is an option that must not be turned down.
Posted by Broadsword at 08:39

It is a great tragedy of India, that such sensible ideas are being stonewalled by vested interests.

When will we learn that such actions only make India weaker & make it easier for our enemies to undermine / weaken us.

But, does not this belie the basic difference between a police force and a military? If one accepts this idea in principle, we also agree that we cannot deal with extremism and violent dissent without the intervention of the armed forces. Thus, we are talking of increasingly 'militarised' police and a 'control state'.

Talking about vested interests in CRPF recruitment. An autorickshaw driver in Mumbai told me he paid Rs. 1 Lakh to get his brother a job with CRPF. He was from UP & this bribe was paid in UP. While I cant verify this statement, I dont believe he was lying or exaggerating.

Wont the army run short of troops then, if everyone ditches after a 7 yr stint and runs to CRPF and what not?

The standing committee arguments are a straight lift from the SCPC report. And uncredited too!

So much for their thought. I agree that the parliamentary committee had raised the issue in an earlier report which dealt with the implementation of GOM recommendations after the Kargil committee report.

The MHA had raised similar arguments then and the government had chosen to sleep over it.

Btw, the army is not in favour of this proposal, if unofficial reports from the MoD are anything to go by.

The issue with the SCPC was about reducing the pensions bill. That is what services have to look at seriously as it is multiplying every year.

The XLRI study for the SCPC also showed that 70% of the Cost to Government salary for a soldier is due to pensions [early age of recruitment and retirement and increasing lifespans]. The comparable figure for a civilian employee is 30 odd percent.

I think even the govt would be against the idea and would not implement the said proposal in toto. The reason is that many believe till date that the CPOs are a counter to the defence forces just in case....., an imaginary fear but still the ethos behind raising a plethora of PMFs/CPOs. That is what is wrong with us - no umbrella org and utter chaos : one CPO to man the tibetan borders (ITBP), a different one for other borders (BSF), one for internal conflicts (CRPF), one for railways (RPF), and a different one for the nepal border (SSB now). This gives anti national elements a chance to hide in the folds and provides fodder for jurisdictional goof ups.

i think this is not a great idea. CPOs can't be made dumping ground for army personnel. army personnel are told shoot to kill. while in paramilitary the persl have to take care the human rights in their mind. it can only create chaos in the totally differnt forces made for different purposes.

Ajay,
considering u have been in the army, i felt u would know something about ur men. but sorry, i was mistaken. u belong to the current breed, which can't see beyond me my myself. a soldier after 7 years of hard life would never like the life of a paramilitary, where corruption is rampant, ppl come and go as per their wish. police, well i would agree, because he would be in his home state, close to his family. paramilitary culture is poor (u would not know much 'cause of the arm u served in). so stop being an armchair journalist (that's the least u could expect from an ex-army officer). speak to some of the men who served with u and take their opinion, before u write articles like this.