HAL looks beyond offsets to grow 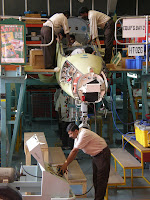 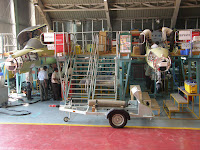 (Photos by Ajai Shukla: The Hawk production line; the first three Hawks being assembled in HAL, Bangalore)
by Ajai Shukla
Business Standard: 28th February 08
HAL, Bangalore
On 23rd February 08, the Indian Air Force (IAF) formally inducted into service its new Hawk 132 Advanced Jet Trainer (AJT) at Bidar, near Hyderabad. And Hindustan Aeronautics Limited (HAL) will soon follow up with another Hawk landmark. In early March 2008 it will deliver to the IAF the first Hawk trainer built in India. Two more will follow at one-month intervals
The Hawk production line in HAL Bangalore is a hive of activity with engineers from BaE Systems, the maker of the Hawk, overseeing construction of the first three Hawks being built in India. This involves assembling 11,000 components , which have come here in numbered plastic packets from the BaE Systems plant in Brough, Yorkshire, UK.
An ingenious double-level platform allows engineers to work simultaneously on the cockpit and controls at the upper level, and on the engine and undercarriage at the lower level. Despite that, each Hawk jigsaw puzzle takes six months to put together. Future AJTs will progressively be manufactured here; once manufacture begins, it will take ten months to build a Hawk.
The Hawk contract stipulated the supply by BaE Systems of 24 fully built AJTs; another 42 were to be built in India. Now, the IAF is about to order another 40 Hawks from HAL Bangalore; the Indian Navy will buy 17 more. HAL will be responsible for the maintenance and overhaul of these 123 Hawks and possibly of Hawks in service with the air forces of Malaysia, Indonesia, South Korea and the gulf countries.
The Hawk is only one of the production lines churning out aircraft from HAL Bangalore. Also working full steam is the Dhruv Advanced Light Helicopter (ALH) unit, which has already delivered 74 ALHs; the Jaguar unit is coming to the end of a production run of 67 fighters; a production run of 20 Light Combat Aircraft (LCA) has begun. In addition, a production line in HAL’s Koraput facility is producing the Su-30MKI aircraft.
This bank of facilities and experience has brought several global aircraft majors into talks with HAL for offsets partnerships. Successful bidders for Indian defence contracts must implement offset requirements worth 30% or more of the value of every contract they win. While HAL would benefit from partnering these foreign companies, new offsets orders are not an immediate priority. Besides the ongoing production, HAL will have its hands full in developing and producing the experimental Light Combat Helicopter (LCH), the Intermediate Jet Trainer (IJT) and the Indo-Russian Medium Transport Aircraft and Fifth Generation Fighter Aircraft.
Chairman, Mr Ashok Baweja, explains, “My focus is to do these jobs correctly on time… We have Rs 50,000 crores worth of orders over the next few years. How to produce them in large numbers, continue to make improvements, upgrade the existing (IAF fighter) fleets… all this is really very difficult.”
With HAL’s long-delayed Light Combat Aircraft (LCA) project overcoming hurdles with the help of consultancies with international companies, HAL’s next flagship project will be the development of the Fifth Generation Fighter Aircraft (FGFA) in a joint venture with Sukhoi of Russia.
Ashok Baweja pours cold water on widespread expectations that the FGFA could be flying in the IAF by 2014. He explains, “We have only signed an Inter-governmental Agreement which agrees to cooperate in developing the FGFA. Now from that will flow the Project Report, General Contract, the structure of the company that will be set up, and where the funding will come from. An aircraft design, development, certification, the complete entity with its power plant, systems, weapons, trials, is a process which takes 15 years to be completed.”
Posted by Broadsword at 09:52

Ajai, do you have any more pics of the birds inside HAL?

Thanks, that'd be great. Keep up the good work.

Naah... nothing first hand on the AEW yet. Will make a trip soon.